How to Catch Jumbo Bluegills in Your Local Bass Lake

Photo by David W. Skok Most fishermen target bluegills solely in farm ponds and other small bodies of water. But... 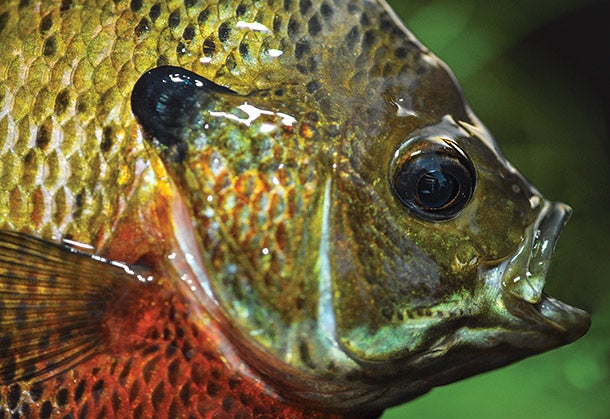 Most fishermen target bluegills solely in farm ponds and other small bodies of water. But these scrappy fish are abundant in sprawling lakes and reservoirs as well and are a fun alternative when heavily pressured bass or walleyes aren’t biting. “Bluegills and shellcrackers tend to be totally ignored in big waters,” says Tennessee guide Jim Duckworth. “And they can grow huge as a ­result.” Here’s where Duckworth finds the fish and how he rigs for them.

Hunt for ‘Gill Grounds
May is prime time for hubcap-size bluegills, Duckworth says. “They’re often spawning now, so head for the back of a cove or tributary arm, and wearing polarized sunglasses, search for clusters of spawning beds near the shoreline. They look like little lunar craters on the bottom, and you should see bluegills darting all around them.” If the fish aren’t spawning, he says, they’ll hold in the shade beneath overhanging trees and boat docks, and near submerged logs and weed patches in 2 to 8 feet of water.

Rig for Bulls
If you’re fishing with your kids and want nonstop action, live bait is the way to go. Thread two or three fat crickets on a No. 2 Tru-Turn Blood Red long-shank panfish hook and fish them 2 to 4 feet beneath a small bobber. “Once you’ve located a school of bluegills, pinching a tiny split shot just above the hook gets the bait into the strike zone quicker,” Duckworth says. For bull bluegills and fat shellcrackers, he prefers small artificials like the Johnson Beetle Spin and Blakemore Road Runner—1⁄8 ounce around shallow spawning beds, and 1⁄4 ounce for probing the deeper water beneath docks. “Both of these lures produce flash and vibrations that trigger strikes from monster bluegills. Simply cast them past your target and slow-roll them back to the boat. I fish both live bait and artificials on a 51⁄2-foot light-action spinning outfit with 6-pound line.”