Micro Managing: Tips For Catching Big Trout in the Middle of Summer

_ Photo by John Juracek_ Shortly after daybreak on a hot, grimy Montana morning, Pete Cardinal and I stood knee-deep... 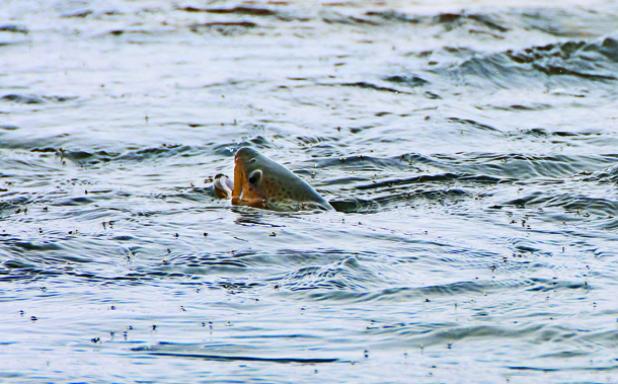 Shortly after daybreak on a hot, grimy Montana morning, Pete Cardinal and I stood knee-deep in the Missouri River and watched flies flutter by the thousands. Thick gray columns of the bugs wafted like smoke plumes over the foamy eddy upstream. The trout were already dialed in, swirling and gnashing at the surface, their mouths clicking and popping like castanets. An epic hatch was happening right before us—and I was feeling anything but confident.

“We would be damn lucky,” I told Cardinal, “if these were any other bugs but Tricos.”

I pawed through my box of minuscule, white-winged dry flies, nudging Cardinal to show him what I had in mind. He shook his head. “Just keep watching,” he said. “We’re not ready to fish yet.”

Sweat the Small Stuff
In spring, trout are happy. They’ve gotten through winter, and now they get to enjoy one mayfly smorgasbord after another. By the time those spring hatches taper off, though, the trout—particularly those on big, busy rivers like the Missouri—have become educated and are harder to catch. They stay that way until late summer, when even the smartest trout cannot resist striking a hopper and the glob of protein that comes with it.

Tricos are the intermezzo hatch for spring and late summer—a mayfly hatch in terrestrial season—and more finesse and skill are required to catch trout during a Trico hatch than at any other time of the year. The bugs arrive in midsummer, but you never know when a hatch will happen, especially a really good one. You just have to keep grinding out river miles, hoping to show up in the right place at the right time. When you finally do time it just right, you then have to figure out exactly what you’re looking at, because these bugs hatch in three phases: First, the male duns show up (usually at night); then the females (usually early morning); finally, after a mating swarm, the adult spinners fall back to the surface. And the kicker is that all these bugs are tiny—size 20 to 28. Catching trout on flies this small can be one of the most frustrating challenges in flyfishing. It can be one of the most rewarding, too—a rite of passage, even.

My first Trico-caught trout was memorable. I was fishing on the Dream Stream section of the South Platte, when I saw a big brown chomping away at a steady trickle of small bugs I assumed were Tricos. After sizing down to a 7X tippet, I tied on a white-winged spinner fly and dropped it right on the seam. The fly was so small I didn’t even see the fish eat it; I only noticed that the white wings had disappeared in a little dimple when the trout sucked it down. That fish measured 22 inches—and was caught on a size 22 fly.

The Zen of When
Cardinal opened his fly box. “Here, tie this one on,” he said. “All they’ll really want is that white wing.” He handed me a size 20 House and Lot Variant—a gaudy old-school pattern I was pretty sure would send all the rising fish scurrying for cover as soon as it hit the water. But I tied it on anyway. I stripped the line, measuring what I thought I’d need to reach the fish, then went into my windup. Cardinal threw his arm in front of me to put on the brakes. “Wait,” he whisper-shouted. “You have to wait for the water to be right. Watch the foam. Watch what happens when the bubbles move.” So I fixed my gaze on the run upstream, which was formed by a boulder jutting into the current. Water flowed around that rock, creating a seam to the left and an eddy to the right, and where the current met the glassy water was a foam line. Only it wasn’t a static foam line—it was like an amoeba changing forms. When the bubbles dispersed and spread like egg whites in a hot skillet, the fish fed very sporadically. But when the foam contracted into a well-­defined, comma-shaped swirl, the trout would go off all at once. Pop. Pop. Pop. Then the foam would spread out again, and all that happened was the occasional stray slurp. Seconds later, the swirl re-formed and the trout noses reappeared. Pop. Pop. Pop.

“That current is collecting the bugs,” Cardinal said. “Fire your cast in tune with the river. That’s how you catch these fish. It isn’t about the bug. It’s about the when.” I followed Cardinal’s direction…and caught a fat rainbow on my first cast that truly mattered. We landed and released the fish, then waited for the moment when the currents lined up again. I made another cast and caught another decent fish—and I did it with a fly that was probably three times the size of the tiny spinners in my box.

Cardinal’s strategy makes perfect sense, really, because trout, like some Americans, want to eat as much as they can while exerting as little effort as possible. This is especially true during a hatch with tiny dries. Why eat one bug at a time when the right pass might earn a mouthful? I’ve since learned that Cardinal is not alone in what I call the “Zen of when” approach to small-fly hatches. Other guides I’ve fished with are equally apt to tie on a bigger fly and wait for that moment to present the pattern. They’ve made a believer out of me. Which is why my box of absurdly small black-and-white flies is now ­officially retired.