How to Fish a Swim Shad, the Most Versatile Lure Ever

Is the Swim Shad more versatile than a ­classic bucktail? (Spoiler alert: Yes) 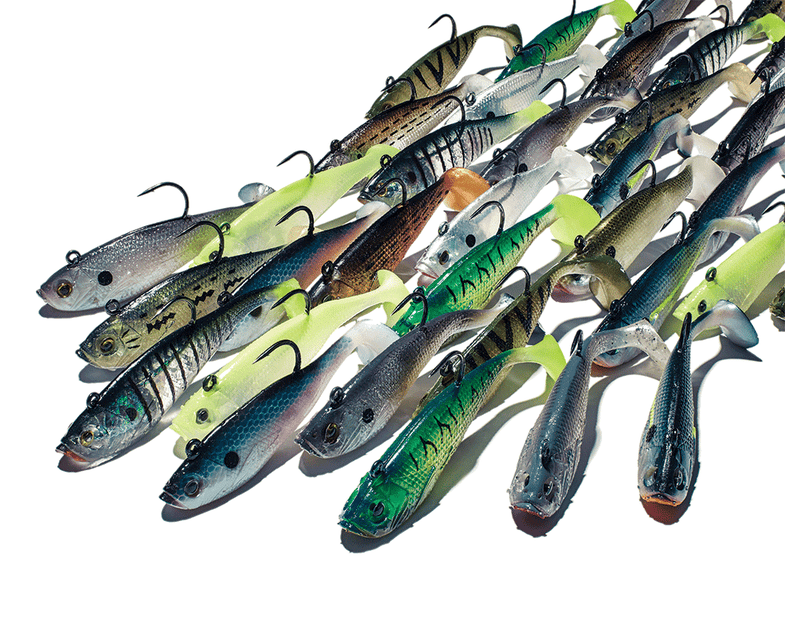 For generations, the white bucktail jig has been hailed as the most versatile lure ever. So effective is its ability to catch any fish anywhere, bucktails were once stocked in military-issue survival kits. It wasn’t until 2002 when the bucktail first got a run for its money. That’s when Storm unveiled its new swimbait, the WildEye Swim Shad. I still remember buying my first pack of Shads…and I still remember the thump of the striper that whacked one of the baits within 10 casts off a Jersey Shore jetty. Since then I’ve put up everything from 30-pound striped bass to 2-pound crappies on these soft plastics, and I rarely hit the ­water—fresh or salt—without a few ­“Stormies.” They are, in my mind, the new-age bucktail. To realize their potency, you need to understand why they work so well, and how they rose to the top at lightning speed.

Revolution Solution
Steve Gibson, a product engineer at Storm, was on the team that developed the Shad. In the years prior to the bait’s release, Gibson noted that the swimbait market was split into two categories: cheap, rigid soft plastics that required an external jighead, and expensive custom baits coming out of California, mainly bought by big-bass fanatics.

“The Storm Shad solved many problems in the early swimbait market,” Gibson tells me. “They came prerigged, which allowed anyone of any skill level to use them. The injection-molded baits of that time were largely solid colors, while our baits came in a huge array of patterns and sizes with internal holographic foil that added a subtle flash no one else had. They were also affordable and widely distributed.”

Those factors contributed to the bait’s early success, but Gibson says the Swim Shad ultimately took off because, quite simply, it caught loads of fish. Not long after the lure hit shelves, Gibson started getting calls from people using the 3- and 4-inch models intended for freshwater to fool giant tarpon. That’s when he realized the bait’s true versatility. “In no time,” he says, “they were in every tackle shop, from the big-boxes to mom-and-pops.”

Cheap Thrills
The beauty of the Storm Shad is that there is no wrong way to fish one. Rip it, jig it, crawl it, hop it, troll it; even if you do nothing but cast and reel steadily, it’ll get crushed. Since the bait’s debut, there have been countless imitators. I’ve always remained a fan of the original, largely because the eyes don’t pop out, the hooks are very strong, and I believe the tail kick provides better vibration than others. I’ve used Shads for everything from bass through the ice to redfish on the flats, but I think they’re most lethal in current. Cast a Shad upstream, let it hit the bottom, and reel back with pops of the rod tip. There’s nary a smallmouth on the planet that will refuse.

Compared with a bucktail, one could argue that the Storm Shad lacks durability and repairability. A Storm won’t last long on a trip for pike or barracuda. If your life depends on it, the bucktail is the lure you’d want in your survival kit, but for the weekend angler who’s willing to spend as much as $20 on one hardbait (and risk losing it), I think Gibson puts it best: “One Shad costs you about a dollar,” he says. “If you had more than a dollar’s worth of fun with one before you needed to change it, that’s a pretty good deal.” It’s such a good deal that I buy in bulk, because the thought of being in a situation where I need a Shad and don’t have one—or have only one that’s on its last legs—is too frightening to imagine.