One of the greatest places in the U.S. to catch big trout in beautiful streams with no crowds (for now, at least) may surprise you. 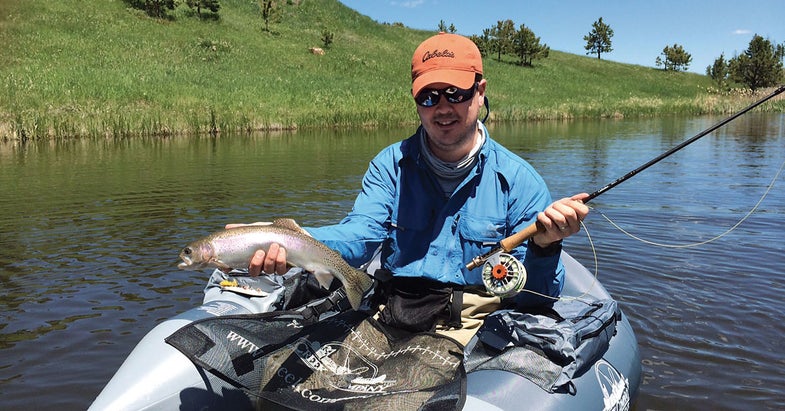 The author floats with a fat rainbow.

A trout trip to South Dakota seems like a roll of the dice. Outdoorsmen travel there to hunt pheasants or to ice-fish for walleyes—not to flyfish for trout, not when Wyoming and Montana are just across the border. Then again, sometimes it pays to gamble…especially when you have a good lead.

“Deadwood is the best secret in trout fishing,” one South Dakota guide told me. “No one comes here to fish.”

“The trout here are big and fat and fight hard,” another guide told me. “And they’re not too picky because they hardly see any pressure. No one knows about this place.”

I had my doubts about how good South Dakota could be, but after hearing this I figured I had nothing to lose.

The Wild West of Trout
Considering the saloons, casinos, and regularly scheduled reenactments of cowboys blasting six-shooters in the streets, I’d be surprised if many visitors notice the creeks that run through and around Deadwood, S.D. But those waters, and the trout they sustain, were what brought our small group of outdoor writers to this old Western town. For three days, we’d fish a variety of rivers, creeks, and lakes in the area. And if time allowed, we’d sit down at a poker table for a hand or two.

We covered a lot of water on day one, fishing three different spots. In the morning, we hit Whitewood Creek, which was one of the most perfect-looking trout streams I’ve ever waded. The water ran clear, there were countless fishy–looking riffles and pools, and the current had that just-right speed for nymphing. As I approached the bank, I’d already convinced myself that I was going to catch a trophy. Instead, my nerves got the better of me, and my first cast ended in a knotted mess.

Eventually I calmed down, and soon landed an 8-inch brown—my first South Dakota trout. The fish didn’t have the strength to test my 5-weight, but it was wild and made me smile as it burst away on the release. I continued upstream, drifting every nymph in my fly box, but I would only hook two more fish: one that I fouled in a deep pool; and a big brown that I tricked with a Prince nymph. The fish broke off just seconds into the fight, but not before it flashed past and gave me a teasing glimpse of its size.

After lunch, we fished Spearfish Creek and Upper Hanna Creek. Both waters were narrow and winding, and demanded technical casting. I landed several small rainbows and browns on a hopper–dropper rig, and lost one fish that would’ve pushed 15 inches, but I didn’t enjoy either creek as much as I should have. The truth is, I couldn’t stop thinking about Whitewood Creek—not because I was dwelling on the fish I’d lost, but because as soon as I stepped in its waters I never wanted to leave. I can’t say the same of many trout streams.

My first day of trout fishing in South Dakota might not have ended with a big fish in the net, but already I found myself plotting a return trip.

Rapid Succession
On day two, while the rest of our group headed to Pactola Reservoir to chase lake trout, I went to nearby Rapid Creek with Wes Remmer, a former communications specialist with Cabela’s. He and I weren’t through with trout on the fly.

Our guide, Dave Gamet, warned us that these fish would not be easy to catch, and I soon understood why. The water was moonshine-clear, and under zero cloud cover and a bright sun, the trout would be quick to spook. Gamet rigged my rod with a G‑String Worm and split shot beneath a strike indicator. “We’re going to fish the hell out of this spot,” he told me. Even if the fish did move away, he said, they almost always returned. Unless we were absolutely sure the trout weren’t biting, we weren’t going to budge. I don’t know if it was Gamet’s expertise or if I’d just been off yesterday, but on Rapid Creek my luck changed.

First, I landed an 18-inch brown. The wild fish was stronger than any I’d fought in a long time, and Gamet instructed me to keep flopping my rod from side to side. “As if you’re making pancakes,” he said. “The fish will get tired and eventually give up.” Gamet was right, and when he scooped the fish into the net, our shouts carried 200-plus yards downstream to Remmer. Ten minutes later, my line came tight to a 14-inch brown. Shortly after that, I had another nice brown on the line before it spit my fly’s semibarbless hook. A dozen casts later, I hooked a rainbow.

I chased the fish for 30 yards before I got in the water to finish the fight. This fish was bigger than the brown I’d landed. Our cheers and celebration were bigger, too.

Around noon, we moved upstream to a spot below a spillway. I cast my fly on the edge of the roiling, foaming chop and let it drift down. It wasn’t the most exciting way to fish, but I knew water like this often holds big trout. I caught and landed a 13-inch brown on my second cast. After I released it, Gamet suggested that we wade to the other side of the spillway. On my first cast, I watched the bobber dunk but missed the strike.

I cast again in the same spot. Nothing.

Instead of making a quick run as I’d expected, the fish just loafed there, as if plotting its next move. That’s when it jumped less than 10 feet away from Gamet and me.

I followed the fish downstream. Remmer had loaned me a Cabela’s 4-weight American Dream, and all day the fly rod had lived up to its name. But for this fight I wouldn’t have minded the 5-weight version. The water was choppy, and the bottom was studded with big rocks, making it difficult to wade. If the fish had decided to bolt, I would’ve been screwed. But I kept up with the trout, and the rod held on strong. Gamet eased his way downstream from me, and I glided the fish into his net.

The brown measured 22 inches and was as fat as a football. I looked at the fish in the net and struggled for words. “That’s the biggest brown trout I’ve ever caught,” I said.
Gamet beamed. “And you caught it…in South Dakota!”

Float Plan
After my morning on Rapid Creek—one of the best days of fishing in my life—I didn’t care what I caught on day three. I was playing with house money.

We’d been given access to fish a pond in a gated neighborhood. We brought float tubes and packed lunches and spent the afternoon kick-paddling from cove to cove catching stocked rainbows, cutthroats, and brookies on hoppers. Having that much fun almost seemed unfair. Almost.

Later that night, after dinner, Remmer, local guide Craig Oyler, and I ordered drinks, then sat down at a poker table. I went on a winning streak, and even had the chip lead for a while. I started to entertain the idea of winning it all. If only I’d quit while I was ahead. Over the next three merciless hands, I watched my stack of chips disappear.

My run of luck in South Dakota had run out. Somehow, though, it still felt as if I came out ahead in the end.

Trip Planner: When in Deadwood, here’s where to…

Have dinner: Deadwood Social Club for the pan-seared local walleye or a gigtantic (and delicious) osso buco shank.