If you think all trout are meek and timid, you haven't been throwing enough mouse flies. 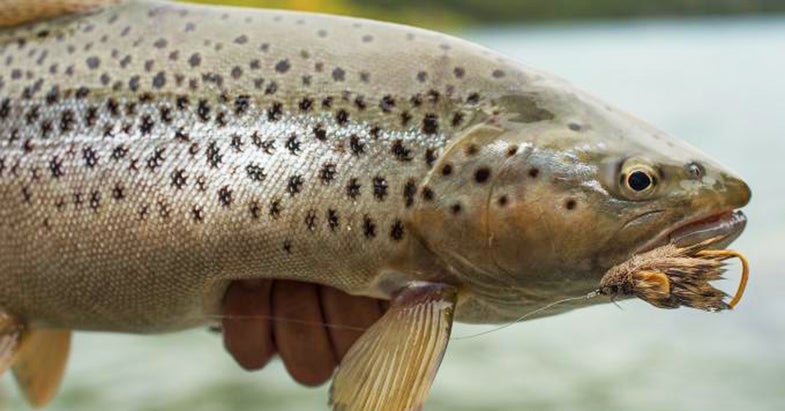 Watching or hearing a trout hammer a mouse pattern on the surface is not only one of the most explosive thrills in flyfishing, but it will also change your perception of salmonids. Gentle sips? Soft takes? Not here. When browns and rainbows reach a certain size, they cannot survive by eating tiny insects exclusively. Trophy trout require gobs of protein to maintain weight, so they turn to baitfish and scads of unfortunate mice that fall into the flow. Any river in the country that holds trout is worth mousing. In the East, this game largely revolves around fishing in the dark when elusive giants get on the feed. In the West, however, guides have learned that there is a time and place for mice while the sun is still shining. I live in Colorado, and that’s my camp. Joe Cermele, on the other hand, is a Northeast native, who is tuned into the dark side. We’ve talked to some of the best mousers in the country. Pick your poison—or mix their tactics to make your own mousy cocktail—and call up a bruiser on your home waters this summer. —K.D.

Mousing brown trout is a dead-of-night game in much of the country, but Schmidt (western -rivers flyfishing.com) attacks the world-famous Green River with rodents in the middle of the day, and with great success.

“I like to fish mouse patterns when I’m bored and nothing else is really happening,” Schmidt says. “I’d rather watch a trout track the mouse, even if it doesn’t end up eating it, than watch a strike indicator.”

The Green is a perfect environment to fish mice, with numerous rocky ledges and outcroppings that jut into the river. Mice frequent these ledges, and often fall in, so the trout have grown accustomed to seeing and eating them.

Schmidt leans on a technique developed in Argentina that prompts big browns out of deeper pools in the daylight. The angler casts downstream and toward the bank into a run or pool, then makes a slight downstream mend with the fly line to create intentional drag, which pulls the mouse across the surface at a rate that mimics a real swimming mouse.

Sometimes, gently lifting the rod tip as the swing concludes will give the fly a little extra tantalizing action. But be careful not to overdo it. If you’re seeing trackers but not eaters, try dead-drifting a mouse pattern about 2 or 3 feet off the bank as the boat slides downstream. —K.D.

“If you had a whole lot of time to spend, no doubt you could raise some fish during daylight. But for the most part, our browns want everything darker than dark,” he says. “You’ll always start waking big stuff across the surface at twilight, but nothing seems to go bump in the night until you need a flashlight to retie.”

Morlock abides by a 20-cast rule for mousing. If nothing comes up in that many swings, it’s time to move on to the next hole. He has hooked big fish in every kind of water but has the most success pulling heavy fish from the nastiest, gnarliest logjams he can find. That’s because the more impenetrable the cover, the more it’s likely to house the kind of brown that will only move around well after dark. To make sure this fish gets hooked when it does decide to crush a mouse, Morlock opts for a pattern with a stinger hook in the tail to thwart short strikes, which are a common occurrence on mouse flies.

“The most important thing is to wait to feel the weight of the fish before setting,” says Morlock. “It’s all about feel, but people swing as soon as they hear the hit.” —J.C.

Alaska’s native leopard rainbows are among the most opportunistic mouse-eaters in the world. That’s particularly true in the early season, after the salmon smolt run out of the rivers, and before the adults return to spawn and die, leaving the river loaded with eggs and flesh.

The most prolific mouse day I’ve ever experienced happened on a fast-moving tributary of Alaska’s Brooks River in Katmai National Park with Palmerton. In one afternoon, we landed 18 rainbow trout (the smallest measuring 18 inches, and the largest 26), all on mouse patterns, and all from the same type of water: washboard riffles, about 3 feet deep.

“The key is focusing on the riffles,” explains Palmerton. “Rainbows thrive in riffle currents, and when the water is moving a few feet per second, they’re making decisions about what to eat very rapidly. When you plop that mouse in the waves, they often can’t control themselves.”

This is typically best accomplished with a downstream presentation, banging a cast against the opposite bank. It’s O.K., in fact, if the fly hits the far bank, or even falls off of it, as a natural mouse would. The cast should be at about a 45-degree angle downstream.

Once the fly hits the water, gather all slack from the fly line and lower the rod tip toward the surface. The fly will twitch and track through the chop. You’ll see the silver flashes as the rainbows first lock in, then slash at the mouse. When a fish eventually eats it, there is no mystery, just an explosion.

“The No. 1 mistake people make in that situa-tion is to lift the rod tip when they see the fish. They end up yanking the fly away,” says Palmerton. “This is all about patience, and letting the fish do the work. Sometimes, particularly in fast riffle water, the trout will give you a second or third shot.” —K.D.

A veteran guide on one of the most revered trout rivers in the East, Demalderis (cross -current guide service.com) understands that the bulk of his clients are looking for big trout on dry flies during one of the Delaware’s prolific hatches. But he also knows that there are times when you should skip matching the hatch and roll out the rodents.

“You’re never going to come to the Delaware and expect to catch fish throwing mice all day,” Demalderis says. “But I always have some for late in the day. Guys sit around and wait for those late spinner falls, but sometimes they just don’t happen. That doesn’t mean the fish aren’t waiting, too, and looking to feed. You tie a mouse on, you can make something happen.”

Instead of a bulky spun-hair mouse that a fish may not get its mouth around, Demalderis opts for a smaller foam pattern with a slender profile that creates just the right amount of wake and makes an easy one-gulp target.

“A mouse is weak in the water. It doesn’t have the strength to fight the current,” he says. “A fast strip makes the fly look unnatural. Just cast down and across and pull very slowly as the fly quarters the current. You’ll know when you get hit.”

Having spent many full nights floating the Delaware, Demalderis also recommends getting your beauty sleep. All-nighters rarely pay off, he says; just extend your day into the first few hours of darkness. That’s when the fish are likely to be most aggressive. —J.C.

Thinking about mousing but reluctant to pull the trigger? Check out the mousing episode of Hook Shots filmed on the Upper Delaware River. It’ll give you a good sense of what a real rodent quest is all about. We teamed up with local fly pro Joe Demanders to look for trophies and floated two full nights, from sundown to sunup, and one full day. The results may surprise you and take some of the intimidation out of a night hunt. —J.C.