What sends a person away from the comforts of his hard-earned home to fight insects, rain, cold, and other disasters... 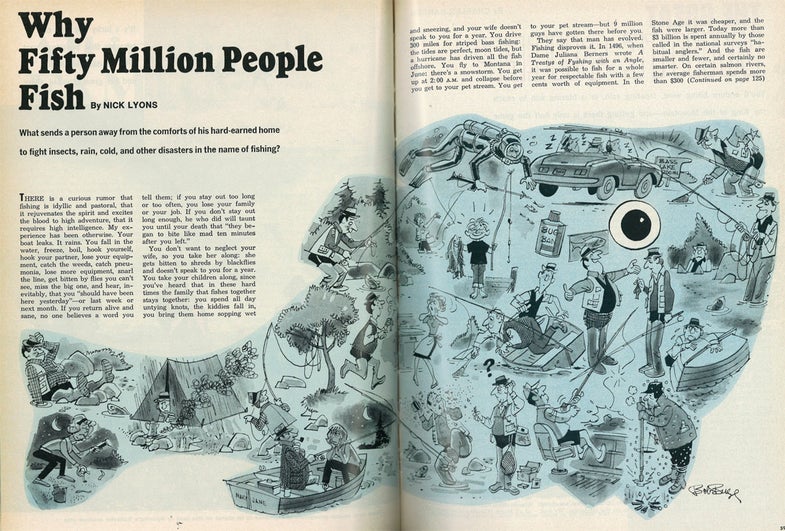 Why Fifty Million People Fish
With more than 400 magazine articles and 20 books to his name, Nick Lyons has been a force in the publishing of outdoor books for more than 30 years. Here, in an article from the August, 1972 issue of Field & Stream, Nick explores a favorite topic: why we fish. As you'll see, he touches on things that ring familiar with all of us. Click here to read the article.
SHARE

What sends a person away from the comforts of his hard-earned home to fight insects, rain, cold, and other disasters in the name of fishing?

There is a curious rumor that fishing is idyllic and pastoral, that it rejuvenates the spirit and excites the blood to high adventure, that it requires high intelligence. My experience has been otherwise. Your boat leaks. It rains. You fall in the water, freeze, boil, hook yourself, hook your partner, lose your equipment, catch the weeds, catch pneumonia, lose more equipment, snarl the line, get bitten by flies you can’t see, miss the big one, and hear, inevitably, that you “should have been here yesterday”–or last week or next month. If you return alive and sane, no one believes a word you tell them; if you stay out too long or too often, you lose your family or your job. If you don’t stay out long enough, he who did will taunt you until your death that “they began to bite like mad ten minutes after you left.”

You don’t want to neglect your wife, so you take her along: she gets bitten to shreds by blackflies and doesn’t speak to you for a year. You take your children along, since you’ve heard that in these hard times the family that fishes together stays together: you spend all day untying knots, the kiddies fall in, you bring them home sopping wet and sneezing, and your wife doesn’t speak to you for a year. You drive 300 miles for striped bass fishing: the tides are perfect, moon tides, but a hurricane has driven all the fish offshore. You fly to Montana in June: there’s a snowstorm. You get up at 2:00 A.M. and collapse before you get to your pet stream. You get to your pet stream–but 9 million guys have gotten there before you.

They say that man has evolved. Fishing disproves it. In 1496, when Dame Juliana Berners wrote A Treatys of Fyshing with an Angle, it was possible to fish for a whole year for respectable fish with a few cents worth of equipment. In the Stone Age it was cheaper, and the fish were larger. Today more than $3 billion is spent annually by those called in the national surveys “habitual anglers.” And the fish are smaller and fewer, and certainly no smarter. On certain salmon rivers, the average fisherman spends more than $300 per salmon caught; it’s cheaper to have a dozen air-shipped from Scotland, and you don’t have to worry about the blackflies. President Grover Cleveland, who on this occasion knew whereof he spoke, pronounced: “At the outset, the fact should be recognized that the community of fishermen constitute a class or subrace among the inhabitants of the earth.” “Subrace.” There’s a message in that word. And in the word “habitual,” too. “Good luck” is the traditional greeting among brothers of the angle. Why not, “Good grief!”?

I have been fishing since before I can remember, which is longer than I’ve been doing anything that I can remember, so I might be considered an authority on why so many people fish. I’ve also researched the issue closely as I dare: the results are frightening. One psychologist claims it is behavioral conditioning; another speaks of it as a “submergence syndrome,” a return to the mother sea; others say there is covert hostility in all fishermen. Not against the fish, I’m sure, but against oneself. No matter. No one really knows. We can go to the moon, but there are deeper mysteries and problems. Like why people fish.

Consider how rational man in the twentieth century spends well over $3 billion on what he can buy for a few dollars in the local fish market. On April Fool’s Day, whether it falls on the first of the month or the last Saturday, thousands of otherwise sane and reliable men rise long before sunup, drive through dark city streets and along bleak, deserted highways to their idyllic stream, then ritualistically immerse themselves in ice water. The temperature is below freezing, ice forms at the guides of their rods, they think desperately of excuses to wives and children for their madness, and by noon–unless they have been in rigorous training for this ordeal–they are insensate, barely able to stand. The next day newspapers carry photos of strange figures from a subrace of man, and a bewildering tangle of poles and lines. Some are wearing arctic gear, others crouch around a streamside fire like cavemen; among them, there may be one beaming face–and if you look closely you will see, hanging by the jaws from a stick, several small reasons why.

Fortunately for many of these men, the season will be over in a month, and then they will go out no more, but then turn to golf or country-club tennis, to wives or badminton, to cruises and touristing, or to any of a hundred more socially acceptable and comfortable ways of spending their leisure moments.

But many remain in the brotherhood of the angle. Some spend thousands of dollars and days on end in the scorching sun, pursuing saltwater sea monsters it will take them hours to land. Others stand on party boats, thirty abreast, having a party hauling up cod. If you think cod fishing is fun, try attaching a clothesline to a can of garbage and lifting it to your fifth-floor apartment in the wind.

Worst of all are the trout fishermen. A guy named Art Flick once spent three years doing nothing but catching and identifying the bugs trout eat. He only carried a rod so other fishermen wouldn’t think he was nuts. Maybe those were the best years of his life. Trout fishermen are the subrace within the subrace. Which is pretty low. They spend endless hours tying little bits of bird’s feathers onto tiny wire hooks. They have been known to slip into a mystical trance at the mere mention of holy names like “Beaverkill,” “Battenkill,” “Big Hole, ” “Snake.” They learn enough Latin to mumble about Iron fraudators and Ephemerella subvarias and Stenonema fuscums. They attend panel discussions and slide presentations by experts and learned entomologists. They study esoteric books like A Modern Dry-Fly Code and Matching the Hatch. And all for what? For a creature that averages about the weight of two Idaho potatoes and has a brain smaller than a chick pea. Evolution?

Perhaps the best answer to the age-old question of what keeps so many people in the category of “habitual anglers” was given twenty-five years ago by a sage named Ed Zern, who wrote that “roughly two-thirds of all fishermen never eat fish. This should surprise nobody. Fish is brain food. People who eat fish have large well-developed brain. People with large, well-developed brains don’t fish.”

And that was only part of the story. Since then the number of fishermen has greatly increased.