There are elk bugling in the mountains this afternoon, a sound that carries to us clearly as we fish Colorado’s... 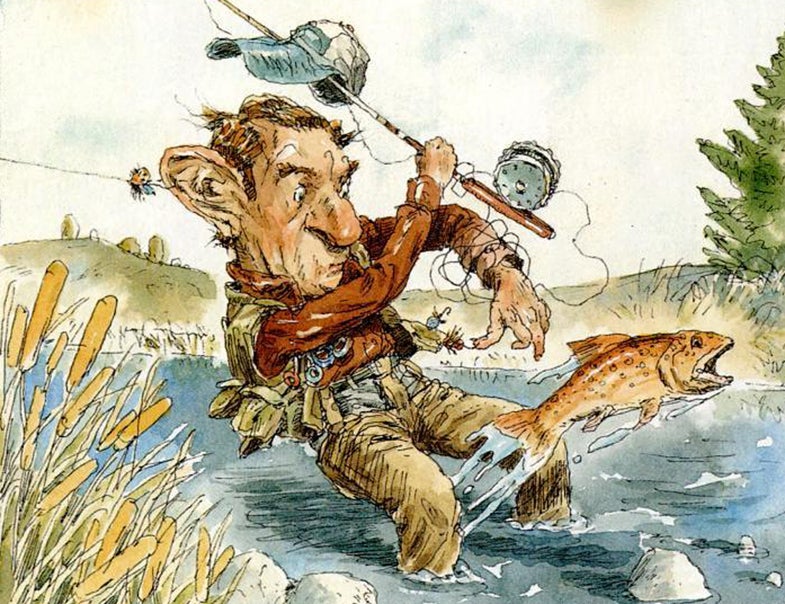 There are elk bugling in the mountains this afternoon, a sound that carries to us clearly as we fish Colorado’s North Platte River near the Wyoming border. The September currents are gentle and there’s no wind; it’s easy to hear the slurping of rising browns and rainbows. It is a perfect day.

I am sitting on the riverbank with Tim Meagher, an exceptional young flyfishing guide who works out of Walden in the North Park area. When he stalks the shoreline looking for trout, Meagher walks with a pronounced limp, a souvenir of his years as a world-class freestyle skier. It was Meagher who designed the moguls course for the 2002 Utah Winter Olympics, where one of his students won a silver medal.

This means he also brings a coach’s perspective to guiding. So I wonder out loud if there’s a common set of problems that his clients bring to the water. Turns out there are.

NOVICE KNOW-HOW
“A common problem with beginners is slapping the water with the line,” Meagher says. “If the fish are rising, this puts them down, but it’s easy to fix. I have the client try to stop his forward cast a little higher above the water so the line straightens and then drops gently rather than crashing on the surface.”

Casting directly at a rising trout makes perfect sense to most beginners, says Meagher, but it’s the wrong thing to do. When a trout rises, it has drifted up and backward in the current from its holding lie, to which it then returns. The trout’s actual position when it’s waiting to spot another bug is some distance upstream from its previous rise form. “Once a novice understands that he needs to cast a few feet upstream of the rise, he’ll start catching fish.”

INTERMEDIATE PROBLEMS
Midlevel anglers tend to be gearheads, buying and carrying all the cool stuff, but often without the skills to go with it.

“Usually they wade to the middle of a big pool and start casting as far as they can,” Meagher says. “They’ve learned to cast— somewhat—but they tend to overdo it. By that I mean casting too far when the fish are—or were—rising right in front of them. They need to spend more time looking at the water to see what’s going on before they start wading.”

That sounds like something we called “streamcraft” years ago, which meant understanding and interacting thoughtfully with the water. Meagher agrees.

“There are three things these guys need to do,” he says. “First, read the water, which just means taking the time to notice if there are any bugs on the water or in the air nearby, to figure out where trout are most likely to be, and to see if there are any rises.

“Second, read the drift. Assuming there’s a trout rising, figure out what kind of drift you need to make with your fly to cover the rise. You should anticipate any drag problems ahead of time, too, by studying the currents.

“Finally, you need the skills to make the actual presentation, whether it’s a slack-line cast or a reach cast, upstream or downstream— whatever needs doing to fish the rise in the best possible manner. That looks like a pretty good fish over against the bank, by the way,” Meagher says, pointing as he speaks.

So I wade across and walk up the far bank, getting into a good position for a reach cast.

“Hey,” I answer. “You forgot one of the guiding rules—you know, the one about stretching fish for your client!”

“Okay, okay,” he says. “Twenty-inch brown. Happy with that?”

And indeed I am.