Summer crowds sabotaging your sport? Don't be afraid of the dark. 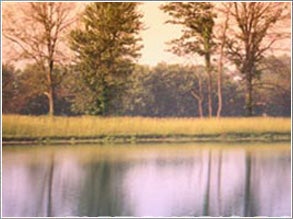 It’s midsummer and there are daiquiri blenders that offer calmer fishing than your local lake. Water-skiers carve their initials endlessly into the water. Guys with alarmingly low brain-cell-to-testosterone-level ratios are redlining their new water hogs as if the first one to nail a sunken log gets a free memorial service. And you, brother fisherman, are part of this horde. Want a shot at that eelgrass where you caught some nice bass two months back? Take a number, buddy. They’re not biting, but one of us is bound to back-hook a bass if we keep at it.

Guide Brent Nelson, who has been fishing his own version of this lake for 40 years, believes summer bass on high-pressure waters don’t need the aggravation. Like deer during hunting season, they hole up during the daylight hours, waiting until dark to cruise and feed. He tells me to spool up with fluorescent line and meet him at the boat ramp at 8 p.m., just when most other anglers are coming off the water.

Nelson has been night fishing seriously for about eight years. He’s a believer. “When you can’t see, your other senses get that much sharper,” he says. “You can feel every tick of your lure, the plastic tendrils on a spider jig. My confidence goes up, and that’s something I’ll take any way I can get it. At night I always feel like I’m one cast away from catching the biggest fish of my life.”

Night fishing, for all its mystique, is more common sense than anything else, says Nelson. The biggest outward change he makes is two 18-inch black lights mounted on the sides of the boat. If you’ve never fished this way, you’re in for a surprise. Under ultraviolet light, even 4-pound line looks like glowing bridge cable. While some anglers believe this scares fish, Nelson says that light attracts them. One thing’s sure: You’ll never have to guess where your lure is. (I set the hook three times on visual taps before I realized what I was seeing was bats bumping my line as they looped through the air for insects.)

You’ll also need conventional illumination to tie and inspect your tackle. Nelson keeps a snake light on his casting chair. He also uses a spotlight to help navigate, wears a small flashlight on a headband, and keeps a bigger one taped to the handle of his net. He likes to see who’s in there before he invites them into his boat. It goes without saying that safety is paramount at night. Fish areas you know well. Cut your cruising speed in half. Wear that life jacket.

Keep your lure selection simple and stick with what works. Fish any color you want as long as it’s black, purple, or red, since these dark hues offer the strongest silhouette to a bass looking up toward what little light there may be: the moon, the stars, or the glow from a marina’s Coke machine.

The dominant forage in many clear lakes is crawfish, which are nocturnal to begin with, reinforcing the predilection of hungry bass to work the night shift. Nelson’s go-to lures include a 3-8-ounce black spinnerbait with a single Colorado blade for a strong, easy-to-locate pulse. He adds a No. 101 Uncle Josh pork frog trailer to mimic the crawfish. Like all experienced bass fishermen, he lets the fish tell him the preferred retrieve, but says that yo-yoing is often the best. Cast out, pull the bait in 2 feet at a time, let it fall, and repeat. Strikes often come at the top of the pull. Set the hook once. Twice is often enough to tear it out of a fish’s mouth. Three-inch tube baits crawled along the bottom also mimic the forage. Rigged on a light spinning rod with a 1Â¿Â¿8- or 1Â¿Â¿16-ounce head, there’s nothing better for bouncing up under docks, prime territory on busy lakes. Take the rod tip back close to the surface and sweep forward, aiming to skip the lure like a pebble.

Buzzbaits, of course, are synonymous with night fishing. There’s something hypnotic about that gurgling vulnerability on smooth water under the tent of night. Nelson ffavors a black, three-bladed plastic propeller with a weather vane-style clacker mounted above the bend in the wire. “A plastic prop is more buoyant than metal. I like to fish a buzzbait as slow as I possibly can while still keeping it on the surface. And the clacker adds an extra bit of noise.”

Our first fish falls for the buzzbait in a backwater cove. But the critter has evidently not read up on classic bass behavior. It takes my lure in open water halfway back to the boat instead of tight to the stumps. It sips the bait, almost like a trout, rather than slamming it. Once hooked, however, it’s all bass-throwing angry punches and heading for the back of the boat to wrap me up in the prop. It’s a 90-second adrenaline rush. Nelson hoists the bass. “Two and a half pounds, easy. You put 10 like him in the boat on this lake and you’ve won the tournament. I just revere these fish. They drive me crazy and take all my money, and I still never get tired of chasing ’em.”

Over the course of the night, we catch and release six more, switching to smaller versions of Nelson’s bread-and-butter lures to accommodate the less aggressive bite. He trims a third of the skirt off a 1/4-ounce spinnerbait so it will sink faster. He uses pliers to snip the collar off the leadhead for a tube bait so it weighs between 1/8 and 1/16 ounce, his optimum weight for skipping.

During the night we hear the who-cooks-for-you of owls and the zap of dockside bug lights. Overhead the sky is unusually clear. We see fewer than 10 other fishermen. At 4 a.m., we decide to head home. I face a drive of 200 miles, fueled by truck-stop coffee. Nelson plans to crash at a friend’s house on the lake. Tomorrow evening, the two of them are going night fishing.