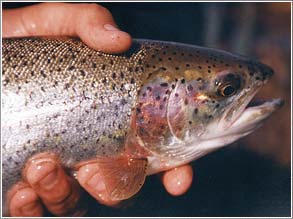 UPPER MISSISSIPPI: Cats and Eyes
When Stan Hagensick boated a 74-pound, state-record flathead catfish here last spring, he didn’t just land a monster mudcat; he cemented La Crosse’s reputation as a Midwestern fishing hotspot. Of course, the flathead is far from being the Upper Mississippi’s glamour species. Most anglers focus on the river’s walleye and sauger fishery, which peaks in spring and fall in the current flow beneath lock and dam systems. The real ‘eye nuts display their zeal (or insanity) through the winter, casting lines into open water while standing mere feet from the edge of the ice.

Warming water shifts the summer action to smallmouth bass along wing dams or riprap shorelines. The area’s abundant backwaters (like Lake Onalaska, where the Black River empties into the Mississippi) are prime spots to search for largemouths, northern pike, and panfish. Catfish action (flatheads and channels are abundant and overlooked) heats up as summer progresses.

The Mississippi is far from the only show in town, however. Within a short drive of La Crosse are some 600 miles of trout streams, ranging from seldom-fished springs to small rivers holding trophy trout. The action for browns, rainbows, and native brook trout has led many anglers to dub the region the Montana of the Midwest, with one qualifier: You won’t see mountains like those in Big Sky country. But then, you won’t see as many neoprene-clad rod wavers, either. For more information, contact the Wisconsin Department of Natural Resources (608-785-9009; www.dnr.state.wi.us).