Fishing for American shad in the Delaware River is my family’s tradition every spring, but that doesn’t mean we–or anyone... 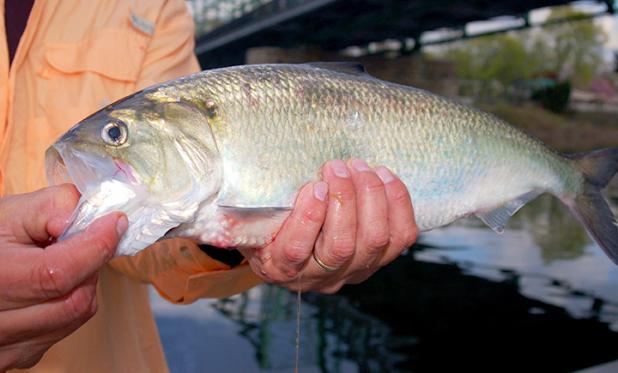 Fishing for American shad in the Delaware River is my family’s tradition every spring, but that doesn’t mean we–or anyone else–have them figured out. Success revolves largely around the number of shad migrating through the stretch of water you’re fishing, but even when the run is thick, the fish can be notoriously finicky. Figuring out how to break their code isn’t easy. Most anglers line the banks or anchor boats in the spots most likely to get their shad darts or flutter spoons in the face of a feisty buck or hefty roe. The migrating shad hit the lure out of annoyance, supposedly, because these fish don’t actually feed–or so I was always taught. In truth, the behavior of American shad varies tremendously from region to region.

Look for “Feeders”
According to Ted Castro-Santos, a research ecologist at the Conte Anadromous Fish Research Center in Massachusetts, we may never conclusively know whether or not American shad feed during their migration.

“The common thinking is that shad stop feeding once they leave saltwater, but some researchers believe they feed until they reach their spawning grounds,” Castro-Santos says. “There is lots of anecdotal evidence that feeding can occur and that it varies by river.”

Capt. Tom Van Horn (irl-fishing.com) has chased shad in Florida’s St. Johns River for nearly 60 years. Van Horn says he’s cleaned a few over the years that had tiny mosquito minnows and grass shrimp in their stomachs, and he fishes far above the tideline. He also claims that shad are easily located by looking for schools of bait being chased.

“You’ll actually see the shad chasing your dart or spoon,” Van Horn says. “That’s what makes our fishery so popular with fly anglers. They use bonefish flies, such as Crazy Charlies.”

While Castro-Santos doesn’t doubt Van Horn’s findings, he points out that shad are filter feeders and use their gill rakers to collect tiny zooplankton, so there may be another explanation. “Maybe the baitfish and shad are pursuing the same prey,” suggests Castro-Santos, and in the process, the shad swallow an occasional baitfish.

Mood Lighting
Knowledgeable shad fishermen in the Northeast know that an overcast sky is best for fishing. The theory goes that sunny days keep these light-sensitive fish close to the bottom, and gray days prompt them to move around in the water column. I’ve also learned that it’s key to find out which channels the shad use to advance upriver. Anchor 10 feet off the hot lane and you’ll strike out; locate right and you could have a 30-fish day. But on the other side of the country, shad fishing isn’t quite so complex.

Christian Witt -(columbia​river​fishing​guide.com) has been chasing shad in the Columbia River on the Washington-Oregon border for 35 years. Considering the immense width and depth of this body of water, you might assume shad are hard to locate. But according to Witt, the size of the river makes it easy.

“Shad prefer to swim close to the bottom. The main channels are too deep and fast for them to do that,” Witt says. “It’s kind of a no-brainer. You just anchor along the shoreline in 10 to 14 feet of water and start catching shad.”

Witt uses gold and silver Dick Nite spoons on dropper rigs to get these 11⁄16-inch wobblers with a single Siwash hook fluttering 2 feet off the bottom. He looks for the exact opposite conditions of what East Coasters prefer.

“Our shad seem to be most aggressive on sunny days. They will hit almost anything,” says Witt. “On overcast days, you have to start playing with lure colors to figure out what they want.”

After talking with Witt and Van Horn, it became clearer to me than ever that shad success revolves around learning as much as you can about the behavior of the fish on your home waters. As a whole, the species is unpredictable and full of surprises, but locally it’s about finding the magic bullet.

When I fall, I fall hard, so you won’t find me wading a rocky river without spike-sole boots. Goat Head Spikes from Sole Spikes ($19; solespikes.com) have saved my hide on some seriously snot-slick rivers. These 1⁄4‑inch cold-forged, heat-hardened steel spikes, which have 28 biting edges per head and a serrated base to stop them from backing out, install easily into soles with or without predrilled holes.