The guide thought I was nuts. Maybe so, for in throwing a little bluegill popper along the lily-pad edges, I... 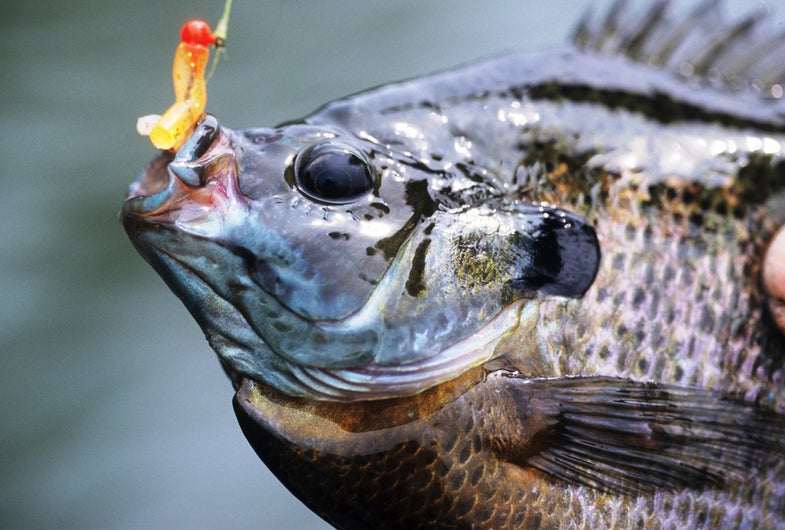 The guide thought I was nuts. Maybe so, for in throwing a little bluegill popper along the lily-pad edges, I was ignoring the largemouths that sometimes broke the surface behind us. But bass fishing, of which I’d already had plenty, can get pretty intense in this age of metal-flake mania.

“So maybe you’ll get what we call a titty brim,” said Tommy Bryant, a veteran north Florida bass and panfish guide, grinning. “You know, a bluegill so big you have hold it against your chest to unhook it, a brim bigger than your hand can span.” In other words, exactly what I was after.

PEAK TIME
Big bluegills defy geographic stereotype, and the biggest ones aren’t confined to the Deep South. Of the 45 states that keep records, only three–Alabama, Kentucky, and North Carolina–have logged bluegills larger than 4 pounds. Seventeen other states have topped the 3-pound mark, ranging from California to New Jersey. A 3-pounder will be 12 to 13 inches long, which turns the phrase monster bluegill into fishing’s ultimate oxymoron.

Bluegill fishing peaks at spawning time when water temperatures reach the high 60s. In north Florida that can mean late March, whereas in Wisconsin the spawn usually doesn’t begin until late May. The start-up also appears to be related to moon phase. Longtime panfish guides like Jeff Blanton, head guide at north Florida’s Bienville Plantation (a pay-by-the-day bass and panfish nirvana; 386-397-1989; www.bienville.com), tell me that the interval from three days before until three days after the full moon is prime for bedding bluegills from March (in Florida) until August.

Hundreds of bluegills crowd the shoreline at this time, building easily seen saucer-shaped beds in sand or gravel bottoms. The fish are easy to catch, and you can have a blast with everything from a simple cane pole to sophisticated fly gear. To find bigger fish, though, you’ll have to look in slightly deeper water, meaning 4 to 6 feet deep instead of the 1 to 3 feet that smaller bluegills seem to prefer.

TACKLE AND TACTICS
Both ultralight spinning gear and light fly tackle are ideal routes to the best sport. A 6-foot ultralight spinning rod paired with fine-diameter 4-pound-test monofilament is perfect for tossing a small bobber rig tipped with a worm, cricket, or small live minnow. Top artificials include Blakemore Road Runners, Beetle Spins, or curly-tailed jigs, generally 1/8 ounce and lighter. A fluorocarbon line instead of nylon will help in fooling larger bluegills, which tend to be fussy in clear water.

While any old fly rod will do, you’ll have the most fun with rods calibered for 4-weight lines or lighter. A floating line with a 9-foot, 4X leader tipped with a size 8 bluegill popper or sponge-rubber floating bug is your ticket to bluegill heaven.

After spawning, the fish disperse to near-shore weedbeds or, in the case of larger fish, into water 10 to 12 feet deep. Finding and catching those sizable bluegills can be difficult. Bait- and spinfishermen should try drifting with slip-bobber rigs that allow the presentation of small baits or marabou micro-jigs down where the big ones like to hang out. If you’re fishing from a boat, pay special attention to the edges of offshore humps. Flyfishermen will need a slow-sinking line, fine fluorocarbon tippets, and a selection of small nymphs like hackled Hare’s Ears and Tellicos to probe the same depths.

The action provided by a hackled fly can be critical. I’ve watched big bluegills in clear water turn up their noses at the wrong fly with all the snide disdain of a New York art critic. As Jeff Blanton pointed out to me last fall, “They didn’t get that big by being stupid.” Fortunately for me, switching to a fly with soft, active hackle has usually made them stupid all over again.