If I were to ask you to describe a typical salmon fishing trip to Alaska, your answer might go something... 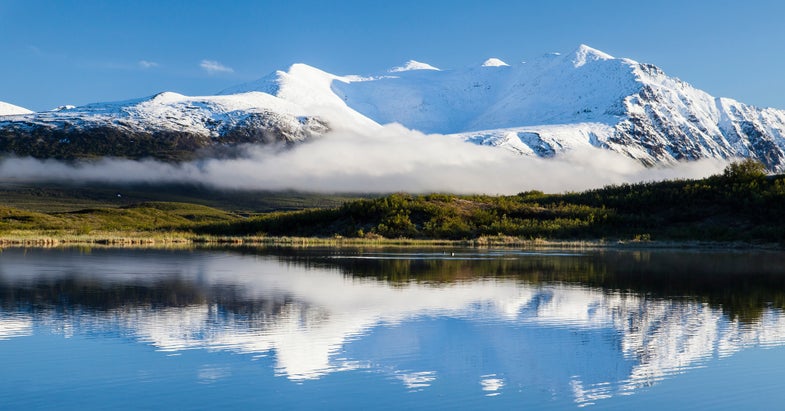 If I were to ask you to describe a typical salmon fishing trip to Alaska, your answer might go something like this:

“Well, you stay at a lodge that was designed by I.M. Pei and featured in Architectural Digest. The chef has studied under Escoffier himself, and the wine cellar would get four stars in the Guide Michelin if their writers would leave France alone. The boats have Persian carpeting on the decks and leather seats by Connolly. The price for five days is $12,000 before you get into tips, airfare, license, taxidermy, and that stuff. And the fishing’s incredible–unbelievable.”

You’d be right on all counts. Alaska’s fishing is nothing short of fabulous, and some of it is indeed for the very, very well-to-do. A lot, however, is very reasonably priced, and in fact you can catch salmon in our 49th state even if you drive an 18-year-old pickup and live on government cheese.

The U.S. Forest Service has established a network of more than 200 remote fly-in or boat-in cabins scattered across Alaska’s enormous Tongass (17 million acres) and Chugach (5.6 million acres) National Forests. The cabins are all located in prime fishing and hunting spots and can be reserved for only $25 to $45 per night, according to the time of year and popular demand. And a nonresident fishing license costs $30 for seven days.

The cabins are maintained in good condition, but you will not live in luxury. They have wood or oil stoves, a table with benches, wooden sleeping platforms, four walls, and a sound roof. You bring your own cookstove and fuel, utensils, air mattresses, sleeping bags, and food. There’s no electricity, plumbing, radio, or telephone, and the water can’t be guaranteed for drinking, so you’d better boil it first. Sounds like the outdoors, doesn’t it?

Getting there is no particular hardship. Alaska Air charges about $890 for a roundtrip ticket from (for example) Seattle to Juneau, which is one of several jumping-off points. From Juneau, or any of half a dozen cities, you can charter a boat, arrange for a floatplane, or rent a skiff and motor. You can get information about transportation and prices from the local chamber of commerce of the area you’ll be fishing.

To get there, we traveled the 30-mile deep-water part of the route in a commercial fishing boat, spending one night aboard. We made good use of that night, setting a Dungeness crab trap and hauling up 18 big-clawed beauties. We took the three largest males to the cabin with us, steamed them, and used the meat, mixed with Tillamook cheese from Oregon, to make omelettes. What was left over went into crab quesadillas with chopped jalapeno peppers and onions.

In the morning we struck out across the flats in an outboard-powered skiff. Reaching the cabin required that we wait for extreme high tide. (This is a common consideration, so be sure to check the tide tables to determine when you can travel.)

On the first morning in camp, the sun had broken through the clouds for the first time in days, and in the distance we could see the snow-clad, 10,000-foot peaks of Alaska’s Coast Range. Signs of deer, moose, and black bear were plentiful on the path that followed the river. We watched flocks of green-wing teal, pintails, mallards, wigeon, and Canada geese wheeling in the sky, organizing for their trip south, just as the salmon were pouring in from the Pacific.

Cohos–the fish we were after–can be as moody as Atlantic salmon. There are times when you can see them moving through the pools and rolling in the current, but you can’t buy a strike with anything you throw at them. Then, for some unknown reason, they all turn aggressive. You get strike after tremendous strike no matter what you’re casting.

Jeff cooked the cohos Alaska-style. He’d lay a thick tamari-marinated fillet on a water-soaked alder shingle and cook it covered on a gas grill for 15 to 20 minutes. The shingle would steam and then burn under the fish, imparting a wonderful smoky taste. A gourmet chef couldn’t have prepared anything that tasted better.

HUMPIES 100 WAYS
There are humpbacked salmon, too. These are bright, silvery fish of 3 to 7 pounds, and you find them tightly packed wherever freshwater enters salt. Throwing streamer flies, we were able to get a strike on nearly every cast, and they took off on powerful runs, blasting clear of the water in high, tumbling leaps. Humpies are called pink salmon when you buy them in cans, and they are fabulous-tasting fish when they’re fresh from the water. We cooked them every way we could think of and ate them at three meals a day.

But this fishing was so easy that it became boring. At one point, we made bets to see if we could make three casts without hooking a humpie, but it couldn’t be done. We’d catch a few each morning to get the day off to a good start and then go do something else. We hiked up a little stream and cast barbless dry flies for 12- and 16-inch cutthroat trout and took 20-inch red-bellied Dolly Vardens on streamer flies. After we’d caught enough of them, we made a long hike across the muskeg meadows and climbed on the ice of an ancient glacier.

We watched a moose cross a beaver bog and saw mountain goats on the cliff above our cabin but turned back when we came upon the fresh tracks of a large bear and caught the scent of dead fish up ahead.

I’ve been to Alaska a number of times and fished with outfitters on rivers and lakes where the angling was so good and the scenery so gorgeous that I couldn’t imagine anything surpassing them. But those were expensive trips.

At the Forest Service cabins, I’ve found the fishing to be just as extraordinary, and the scenery as beautiful. Yet there was something more. I like fishing when I want to rather than according to an outfitter’s schedule, and I like living off the land, cooking my catch the way I prefer, and doing it all with people I like. It makes the Alaska experience entirely your own, and you can do it for the price of a cheap motel room.

THE CABINS: Complete cabin information is available from the Forest Service Information Center in Juneau or from the National Recreation Reservation Service. Maps showing cabin locations and descriptions of the facilities as well as fishing and hunting information for each site are available online at reserveusa.com. Reservations can be made up to six months in advance. Many of the cabins have a small skiff with oars, but outboard motors and life preservers are not supplied. The length of your stay is limited to seven days from May through September at some cabins, 10 days the rest of the year.

WHAT TO BRING: The Tongass and Chugach National Forests are typical rain forests. At sea level the weather is mild, but you’ll wear heavy-duty rain gear most of the time. You’ll need fleece or wool shirts, warm-up jackets, and pants that dry quickly.

–Waders are useful in many locations, but hip boots usually suffice. On streams where the fishing is done by rock-hopping, knee-high rubber boots may be the most comfortable. Streambeds can be slippery, so be sure to have boot soles that grip.

–Take along a cellphone or VHF handheld radio to summon help in an emergency, but be aware that mountainous terrain makes reception unpredictable.

–Carry bear spray. Some people attach bear bells to their boots as a precaution when hiking in thick cover.

–Depending on water conditions, 7- to 9-weight fly rods are most useful, and you’ll want both floating- and sink-tip lines. Ten-pound-test leaders are sufficient for most salmon fishing, but if there are chinooks in the area, you’ll need to move up to 12- to 20-pound-test. Take plenty of flashy streamer flies in sizes 2 and 4, but don’t be without small dry flies, nymphs, and streamers for trout fishing.