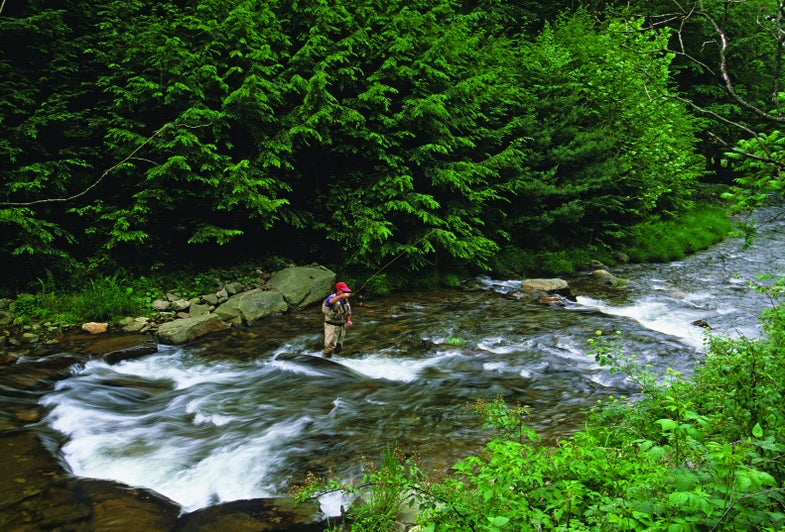 Small trout streams like this Pennsylvania creek could be the source for millions of gallons of water needed for drilling. Cathy and Berry Beck
SHARE

Western sportsmen have been dealing with the ramifications of natural gas extraction for years, but now Eastern sportsmen need to brace for impact. Widespread gas drilling is hitting Appalachia, and unless environmental regulations and enforcement catch up with the drilling, there could be major damage to world-class trout water, from small mountain streams to the Delaware River.

Gas and Cash The gas lies in what is called the Marcellus Shale Formation, a 600-mile sheet of sedimentary rock (see sidebar). Until recently, extraction wasn’t cost effective, but advances in technology and higher gas prices have made it lucrative. Extremely lucrative. Gas companies have been offering landowners as much as $2,500 an acre just for lease rights; royalties are paid on top of that, and sums can be huge. Suddenly a small farmer or modest hunting club might be looking at a million-dollar windfall. The states are also leasing public hunting land, licking their chops at the prospect of an industry that could fill coffers and balance budgets for decades.

There is no stopping Marcellus shale drilling. There is too much money to be made. But it has exploded so suddenly that state natural resource departments have been caught flat-footed and are struggling to get adequate regulations and compliance staff in place.

Water and Trout In a process called hydro-fracturing, first, a well is drilled thousands of feet down and, by way of directional drilling technology, turned horizontal. The gas is released when the shale is “fracked,” basically broken up by a mixture of water, sand, and chemicals that is forced down the well. As much as 3 million to 9 million gallons of water are used per well. A well may need to be fracked a few times during its life.

Where this fracking water comes from is one of the major threats to fisheries. Trucking water in is expensive; it’s cheaper to run a fire hose to a local source. Because well sites are often in undeveloped highlands, these sources are often small trout streams. Regulations for drawing water vary among the states, and there are questions about how well current regulations protect waterways. There is also a question of enforcement. Four gas companies have already been caught withdrawing water from Pennsylvania trout streams without permission.

After the fracking mixture does its job, it is pumped out and must be disposed of. It contains toxic chemicals such as arsenic and hydrogen sulfide. Before being discharged, it must be trucked away to a plant for treatment.

Roads and Runoff Another concern is the secondary impact, like runoff and habitat fragmentation, caused by this development. Each well pad (think of a cleared gravel parking lot) is usually around 5 acres, and each pad needs an unpaved road and a pipeline. Multiply that by tens of thousands of wells and add the fact that wells can produce for 30 years or more.

“Even if everything is done right,” says Steve Kepler, fisheries biologist with the Pennsylvania Fish and Boat Commission, “if all the water withdrawals comply with regulations and all other protections are in place, the impact is still going to be huge. These places just aren’t going to be the same anymore.”

On a recent tour of active drill sites on Pennsylvania state forest land in Lycoming County, I got a glimpse of what the future may look like in the region. I saw flocks of turkeys and ancient hemlock groves and small coldwater streams. But the whole area was laced with pipelines and roads, and it seemed as though we were never far from the hum of a compressor moving gas through the line. This was no longer a working forest that balanced resource management and recreation. It was an industrial forest, a kind of open-air factory, and it’s a sign of things to come. Eastern sportsmen need to speak up now to make sure some of our last remaining wild places stay that way.