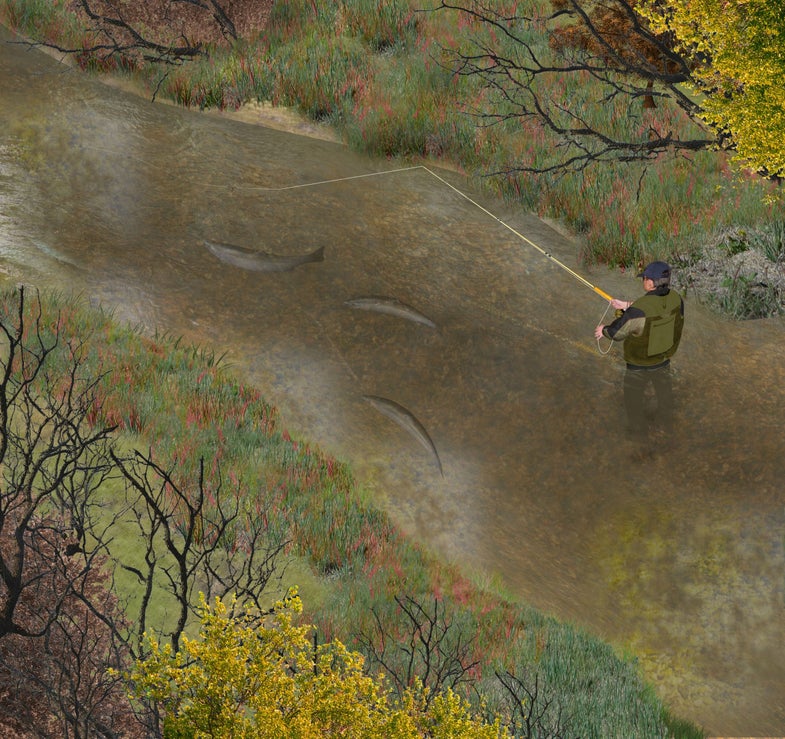 Fall steelhead anglers typically cover water with cross-stream casts until a fish hits. But Michigan flyfishing guide Tom Johnson (tomjohnsonflyguide@att.net) employs a different approach. “The fish are more aggressive now because their main goal is to stock up on food for the winter,” he says. But Johnson knows there’s a big difference between being aggressive and being catchable. So to increase his hookups, he puts the fly right in front of the fish.

Getting Down Pattern choice matters, but presentation is the real key. “You need to put the nymph 4 to 8 inches above bottom, as the fish aren’t inclined to dig something off the bottom,” Johnson says. That means adding weight to your line. An unweighted fly moves more naturally than a weighted one, so he uses a slinky weight attached to the leader butt (see inset above). The setup lets you easily change the weight as river conditions dictate; Johnson notes that every pool or run may require an adjustment.

Dead Drift When water temperatures dip below 50 degrees, Johnson dead-drifts a nymph on a 91⁄2-foot (or longer) 7- or 8-weight rod with a small-diameter shooting line rather than a traditional weight-forward floating fly line. The small line allows for quieter entry of the flies on the cast (no line slap to spook fish) and offers less resistance in the water, which makes it easier to get a drag-free drift. Don’t false cast. Simply pick up the line and shoot it directly upstream. Casting with the added weight is smooth and effortless. This is a great way to work a tree-choked stream that routinely snags back casts.

The Go-To Rig One of Johnson’s most productive rigs consists of an 8- to 10-foot butt section that ends with a bead and barrel swivel. A slinky weight slides freely on the butt section via a snap [a]. To the swivel, he ties on a 3- to 6-foot leader, to which he knots on a green chartreuse caddis nymph [b]. He runs 17 to 24 inches of line from the eye of this fly, then attaches a stonefly nymph [c]. The long, light tippet (8-pound Maxima Ultra) offers little water resistance and sinks quickly.