Winter can be the most rewarding season of the year for fly anglers. If you can stand the cold, you... 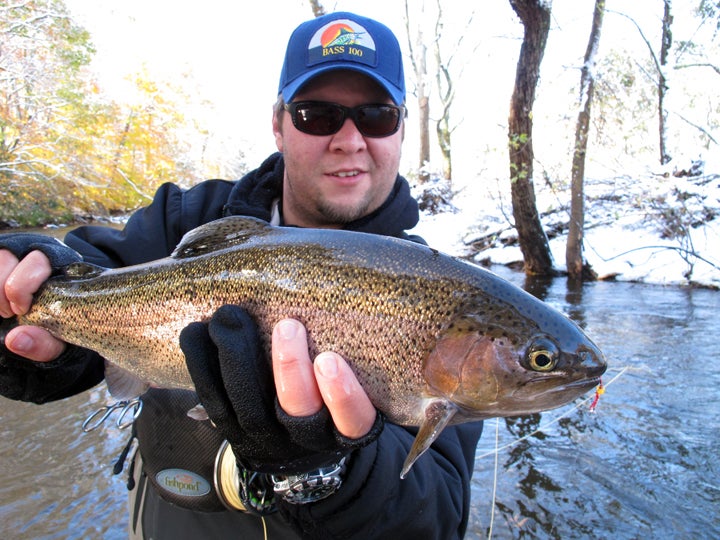 Winter can be the most rewarding season of the year for fly anglers. If you can stand the cold, you just might have the river to yourself, experiencing solitude that’s rarely found when the mayflies are hatching in spring and summer. But there’s another reason to get out and fish between December and March: Winter can also be the most technically challenging season, demanding precision and skill more than any other time of the year. If you can catch fish now, you can catch them any time.

The trick to catching fish with flies in the winter boils down to four simple rules: Slow Down; Size Down; Tone Down; Present Down(stream).

Slow Down
Tip 1–The Trout Forecast: When water temperatures drop, the trout themselves slow down. Their metabolisms decrease. They become more lethargic. They don’t chase flies as actively as they would when the water temperatures are in the ideal trout zone of 45 to 65 degrees. One way around that, of course, is to fish in tailwaters–rivers that flow from bottom-release dams. The water released from those dams remains at a relatively constant temperature (usually in the 40s or 50s) throughout the whole year. So the fish don’t feel much difference between July and January–though shorter days and seasonally different insect hatches do indeed change the angling paradigms substantially between summer and winter.

Tip 2–Stalk Softly & Cast High: When trout are in the slowed down winter mode, the angler should slow down as well. Rivers are usually at their lowest and clearest in midwinter. Bright-white, snow-covered banks reflect light and exaggerate shadows more. While winter trout typically aren’t as “jumpy” as they are in the summer, that doesn’t mean they are much less spooky. I typically try to slow my pace and movements by at least 25 percent when I fish in the winter. I am particularly concerned about the position of the lower winter sun, so I can be careful not to cast long shadows over the runs I target. I also spend more time high on the riverbanks spotting fish before I cast. If you can see and then specifically target trout, your odds of hooking up are exponentially greater than they are when blind casting in the winter.

Tip 3–Make Slow & Short Strips: Streamer fishing can be good in winter, especially in tailwaters. But again, I tend to slow the tempo down a tad in winter. Instead of the long, aggressive strips I make with my fly line in summer in fall, I’m more apt to make slow, choppy strips in winter.

Size Down
Tip 1–Be a Nymphing Maniac: I typically fish with smaller flies in the winter, and 99 percent of winter flyfishing is nymph fishing. At any time of the year, midges comprise more than 50 percent of a trout’s diet. So these small insects are extremely important for anglers to understand and imitate in every season. But the midge game is especially important in winter, because there is not much mayfly or terrestrial activity then.

Tip 2–Black Stoneflies Are Best: Another very important bug to key into during the winter is the little black stonefly. While these stoneflies share the same basic shapes and dark colors as their spring and summer counterparts, these insects are typically much smaller (like size16 or smaller). While egg flies (small ones) and, in some cases, attractors like Prince Nymphs are useful winter patterns, an angler cannot go wrong in most locales if they fish little black stoneflies and small midge patterns (like zebra midges, juju midges, and black beauties) the vast majority of the time.

Tip 3–Lighten Your Tippet: I also make a point to size down on my fly rig when I trout fish in the winter. If I normally fish a river with 4X tippet, I’ll usually drop down to 5X. I think the light and shadow contrast on bright winter days added to the low clear water is a recipe for making trout more leader shy than they might normally be in summer. It’s also important to drift flies directly to the trout in winter, so smaller tippet helps with presentation.

Tip 4–Same With Your Strike Indicator: I never throw big, gaudy strike indicators in the winter. Instead, I prefer to use small pieces of yarn, pinch-on foam, or when the water is really low and slow, I’ll use a dry fly like as small parachute Adams as my de-facto strike indicator.

Tone Down
Tip 1–Be Dull (Seriously): As a rule of thumb, winter demands duller, darker colors more than any other season. That applies to everything–from the flies you fish, to the colors you wear on your body. Typically, small black flies are best in winter. Tans, browns, and greens also tend to work well. I try to steer away from the bright accents like sparkly wing cases and shiny beads as much as possible. Black or glass beads tend to work better for me when I want to use a weighted fly. And while I am not afraid to fish in a loud Hawaiian shirt in the spring and summer, in winter I typically wear white, black, tan, or sky blue. On a snowy riverbank, a red baseball cap is going to be a dead giveaway to the trout, and it will negatively impact your fishing.

Tip 2 –Wait Longer Between Casts: Another important factor of the Tone Down rule has to do with your casting tempo. You cannot be flogging the water in winter. Wait at least 25 percent longer between casts, and take time to watch fish react to those casts, even if they don’t eat the fly. A trout’s body language will tell you when to cast more clearly in the winter than in any other season.

Tip 1–Cast Down: While most of us like to fish from downstream to upstream, in winter I make 90 percent of my presentations–even nymph presentations–in a downstream direction. I think the prospect of “lining” the trout is a far greater risk in winter than in any other season. When I see a trout holding in a run, I first factor where the sun is relative to my position, and get myself in a spot where I can see the fish (without staring into surface glare) without creating shadows. Drop the flies several feet upstream of the target fish and let them drift into the zone. Strikes can be exceptionally subtle in winter, so set the hook (gently) on even the slightest stall, stagger, or hiccup in your indicator or line.

Tip 2–Watch Your Weight: Another important thing to remember when flyfishing for trout in winter is those lethargic fish are going to move less to eat a fly. To force them to eat, you have to hit them in the head. Do that,and they will eat flies. The number-one factor in making a good presentation is weight. Change your weight at least five times before you even think about changing your fly pattern. You want the bugs suspended so they drift exactly into the feeding lane. That may require tinkering with your weight from run to run. It also usually means making many casts to earn a bite. So be patient, and pause between repeat casts.