Video: How To Tie Articulated Streamers For Really Big Trout

Photo by Joe Cermele Grandpa’s Gray Ghost and Mickey Finn will always catch trout, but talk to any of the... 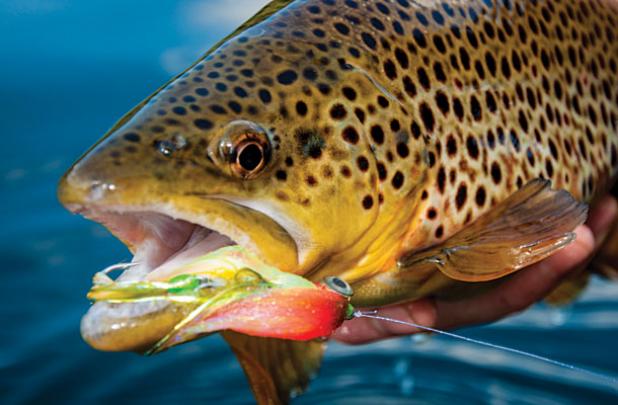 Grandpa’s Gray Ghost and Mickey Finn will always catch trout, but talk to any of the growing number of guys working gaudy 5- to 8-inch jointed streamers, and they’ll tell you that Gramps’s puny flies just don’t catch ’em big enough. These guys land mammoth browns in many of the same waters where you land 10- to 12-inchers.

Most credit the trend of big, articulated flies to Kelly Galloup, author of “Modern Streamers for Trophy Trout,” who started joining multiple hooks with flexible bead wire to create these huge, wiggling bugs in the early 2000s. Now, a cult of cutting-edge fly-tiers is running with the ginormo-streamer craze. If you want to catch the biggest trout of your life on the fly this fall, commit to chucking a monster streamer all day, and buy a bigger landing net. If you want to learn how to tie a few of the most notable big trout-catching jointed streamers, check out these videos put to together by vise master Brian Wise of Flyfishing the Ozarks. These four bugs were featured in the November 2013 Field & Stream feature “Shimmy, Shimmy, Pow!,” but you can find instructions for many other streamer patterns on Wise’s website.

Created in 2002, most tiers credit Galloup’s Sex Dungeon as the bug that started the articulated streamer craze. “Real predator fish don’t strike from behind. They eat prey headfirst,” Galloup says. “I created the Sex Dungeon because I wanted a longer fly that had a front and rear hook as opposed to a long fly with only a rear stinger, but it also had to have great movement. I design all my flies around movement first.” Since its debut, the Sex Dungeon has scored trout to 30-pounds from Argentina to Michigan. As for the name, Galloup says he showed an early version to a “hot chick” staying at his lodge who said, “That thing has more s–t in it than my sex dungeon.

Though this video shows you how to tie Schmidt’s Voodoo Squatch, the Stinky Mayo featured in the print feature is the same fly, only with weighted dumbbell eyes instead of weightless plastic eyes. Make that change at the vise and you’ve got a Stinky Mayo. The Stinky Mayo’s dumbbell head isn’t designed to make it sink faster, but rather give it a jigging action instead of a side-to-side swimming action. “Sometimes you’ll have trout following a weightless streamer that moves like a swimbait, but stopping at the last second before hitting,” Schmidt says. “Just that small change to a vertical jig action is often all it takes to push them over the edge.” The Stinky Mayo takes its name from a paled-skinned Costa Rican friend of Schmidt’s he nicknamed “Mayonnaise” after a night of rum drinking. Where the “stinky” came from he wouldn’t say, but he did note that the fly has claimed lots of trout in the 28-inch range.

Though the Legs For Days–aptly named for its long silicon legs–didn’t originally start out as an articulated fly, Harvey decided to add a joint for some friends bound for the Little Red River, in Arkansas, where it quickly proved its worth on some giant brown trout. “The patterns is really just a Frankenstein fly created using techniques I learned from other great tiers,” Harvey says. “To be honest, it’s kind of an ugly fly to cast. It’s not easy. You need a bigger stick, but it swims just like a snake in the water.” So far, Legs For Days has produced everything from Ozark browns to huge Rocky Mountain bull trout.

“I wanted a fly with a little jigging action that wouldn’t sink too fast,” Strolis says. “But I also wanted it to be easy to cast.” The result is the triple-jointed Hog Snare, tied with Arctic fox hair stacked in increasingly thicker bunches that help give the fly a full 3-D look from any angle. The Hog Snare isn’t overly flashy, but the triple joint, matched with a smattering of rubber legs, give it incredible movement. “The first time I took this fly to the river, it was completely blown out,” Strolis says. “I couldn’t even wade so I just kind of spey cast the fly from the bank, and on the second cast I caught a 23 ½-inch brown. I can’t even tell you how many 2-foot-plus trout it’s caught since.”