When you first peer down the long aisles of the Outdoor Retailer summer show in Salt Lake City, you instantly... 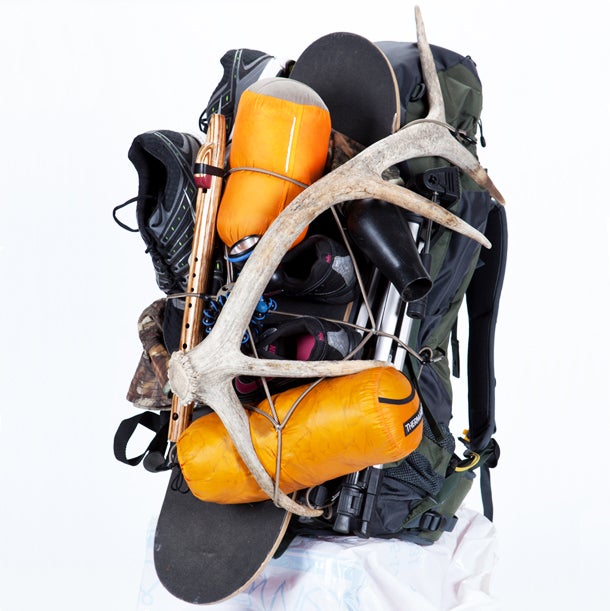 When you first peer down the long aisles of the Outdoor Retailer summer show in Salt Lake City, you instantly know you’re not at the SHOT Show. Camo? Nope. Bolt-actions? Nah. Treestands? Nada.

Given the emphasis on mountain bikes, climbing, and standup paddling, you might be forgiven if, at first glance, you think the show doesn’t merit your attention. That would be a grave error, as this show has a lot to offer hunters and anglers. Many of us camp, and many of us backpack into remote areas to enjoy the wilderness. This show caters to that spirit, and as a result, it has a ton of tents, sleeping bags, packs, boots, knives, flashlights, and all the other cool stuff that make camping fun. If you peer deep enough, you’ll also find a surprising number of hunters here as well. When I stopped at one booth to look at a pair of full-rand boots, the manufacturer rep asked, “Elk hunter?” I nodded, and he said, “Me, too.”

Most of these products won’t be seen at SHOT Show, but they still will interest you, because they help make the outdoors more enjoyable. What follows is a brief look at some of the gear that made me stop in my tracks. No question, some of this stuff is coming with me to deer camp this fall. –Slaton L. White

The PackNet by Tribe One Outdoors

There’s nothing new about shock-cord systems. We’ve all used them for years to tie down gear on our pickups and kayaks. But this Utah-based company, founded by three brothers, has added a neat new twist. The PackNet is a six-point cord system that uses an innovative attachment device–the PachTach–which uses a carabiner to create individualized attachment points on a pack without piercing the fabric. MSRP:$35; Tribeoneoutdoors.com

If your hunting or fishing takes you into rough country well out of cell phone range, you might want to think about bringing along this pocket-sized device. The new SPOT3 is smaller than its predecessors (the whole thing is not much bigger than a dental floss dispenser), but has the ability to track where you are (and let friends and family follow you on Google Maps) as well as alert emergency responders if trouble finds you.

The Gen3 boasts improved battery life and motion-activated tracking, which also helps conserve battery power. Best of all, it has two flaps that cover a pair of vital controls. One lets you send a notice to friends and family (non emergency); the other is a true SOS button that sends your GPS location to a GEOS emergency response center. MSRP: $150, service plan extra; findmespot.com

Fishing from a kayak can really make the action up close and personal. Wilderness Systems has taken its popular Ride 115 kayak and added customizable features designed to improve its fishing efficiency and operator comfort. Ride 115X features include a removable console, SlideTrax, a modular outfitting system that uses interchangeable components in order to add accessories (think rod holders, anchor trolley, and a transducer arm, among others) without drilling or complicated installations, and security bars on the stern that let you secure gear with web straps or carabiners. In addition, a stand-up assist strap eases the transition from a seated to standing position. And, if you add the Phase 3 AirPro contoured, ergonomic seat system, you’ll be all set. I wouldn’t call it a Barcalounger for anglers, but it’s pretty damn close. MSRP: $1,200; Wildernesssystems.com

Though I like to pack light, I do appreciate some comfort in camp. I’m long past the days of sitting on stumps or coolers and preparing food on a nearby rock. That’s where Alite Design comes in with a welcome assortment of innovative camp gear. I especially appreciate a pair of cool chairs–the Mayfly ($100) and its bigger brother, the Mantis pictured above ($120), each of which take tent-pole technology to new ends. And if you are a XXL kind of guy, the Bison ($199) is for you. This full-size chair is also portable and collapsible and can support 250 pounds.

You should also take a look at the portable Treeline Table ($149), the adjustable legs of which allow you to use the table on any gradient or terrain type. The table top can also be adjusted to be as tight as a drumhead to support cups and bottles. Total weight is less than 5 pounds. Available next spring. Alitedesigns.com.

If ultralight is a word to live by when you hike up to that mountain trout stream, then the Helium Bivy is for you. It weighs only 18 ounces and is fully waterproof and breathable. The clamshell design features a 70-denier floor, no-see-um netting at the opening, and straps to hold sleeping pads in place. MSRP: $169; outdoorresearch.com

The new eXplorist 350H is a good example of technology designed for true hunter use. Though small (fits readily into the palm of your hand), it delivers an impressive assortment of features. But, if all you really want to know is where your truck and deer stand are, it’s set up (with buttons that can used while wearing gloves) to do exactly that.

More adventurous outdoorsmen can reap the full benefits, as the eXplorist 350H delivers pre-loaded detailed base maps with contour elevations and game management units, hunting specific waypoints, and hunting geofences. Included with the Magellan eXplorist 350H is a one-year subscription to Digital Globe satellite imagery that lets you “virtually scout” a future hunt location from the comfort of your home via a satellite view of the area you plan to hunt. Hunters can quickly identify (and mark) areas of interest such as game funnels, potential feeding areas, and suitable glassing locations. MSRP: $250; magellangps.com

I fish with an old timer who jealously guards his 30-year-old cast iron skillet. No one in camp is allowed to cook with it or, most important, clean it. He’s earned the right to be cantankerous about it; that skillet never fails to perfectly brown potatoes for breakfast hash. Most “seasoned” outdoorsmen know the care and feeding of an iron skillet can take some effort, especially the initial process of seasoning.

A while back Lodge introduced a line of pre-seasoned cast skillets as a way of making their product more “modern.” Somehow that intro failed to register on my radar. But stopping by their booth, and marveling at the number of people that are still interested in this 19th Century technology, demonstrates that sometimes the “old ways are still the best ways.” A 9-inch Foundry Seasoned Cast Iron Skillet costs just under $22. Lodgemfg.com

Founded in 1965, Sierra Designs has a long heritage of manufacturing sleeping bags, tents, and apparel. For 2014, the company has completely restructured its line.

The zipperless Backcountry Bed (access is provided through a large opening in the top) drew a lot of attention. An oversized, integrated comforter helps seal the opening while providing enough wiggle room to accommodate a sleeper who prefers to sleep on his side (no mean feat in a traditional mummy bag). On cold nights, tuck in the comforter; on warm nights, leave it untucked–just like at home. An integrated sleeping pad sleeve lets you slip in an inflatable pad for extra comfort. Available in a two-season (30 degrees) two-pound version ($349) or three-season (15 degrees) model that weighs only seven ounces more ($399).

The wearable Mobile Mummy features zipperless armports and a fold-up design for walking around camp . Wouldn’t be surprised if some Northern Tier treestand hunters saw this as a comfy way to endure a long morning watch in cold weather. $349 to $399. The Flashlight 2 UL tent uses a hybrid single- and double-wall construction to reduce weight. Dual drop doors (each of which sports an 8-inch awning) provide easy entry and exit. The design offers “gear closets” next to the doors; doing so allows you to access the pack without having to crawl over gear to get in and out. Finally, ventilation has been vastly improved. Weight is just 3 pounds. MSRP: $360; Sierradesigns.com

Those of us old enough to remember Paul Bunyan’s blue ox (Babe, of course!) would no doubt recoil in horror at the thought of wireless technology that allows hunters or fishermen to stream music into camp. But think about this. You can also stream radio broadcasts and be able to listen to the big game while sitting around a campfire.

The Turtle is a Bluetooth speaker that wirelessly connects to your smartphone, laptop, tablet, or any other Bluetooth-enabled device. It can stream crystal clear audio for a range of up to 30 feet for 9 hours on a single charge of its rechargeable lithium-ion battery. The rugged case is dustproof, shock proof, and water resistant. It’s small enough and light enough (less than a pound) so it can literally go anywhere. MSRP: $130; Outdoortechnology.com

From the Land Down Under comes a product that is sorely needed by backpacking hunters as well as guys in a primitive deer camp. The Scrubba Wash Bag is, literally, a portable washing machine perfectly sized to wash tee shirts, underwear, and socks. Open the plastic bag, dump in the unmentionables, add water and liquid soap (or pre-mixed powder), seal, and start the cycle.

The Scrubba creates the agitation needed for a good wash through a series of raised dots that act as a washboard as you knead the bag. It works, and it’s a whole lot better than beating clothes against a rock. MSRP: $64.95; thescrubba.com.au

Portable power is all the rage these days, and many hunters won’t go afield without tucking some sort of charger into their pack. Brunton has upped the ante here with a radical new charger, the Hydrogen Reactor. Essentially, it’s a fuel cell that combines hydrogen and oxygen to produce electricity.

To operate, users lock a Hydrogen Core into the device’s fuel cell. Once powered on, the solid-state hydrogen converts to gas power and issues a 5v 2amp output. Each Hydrogen Reactor comes with two Hydrogen Cores, the equivalent of more than 30 AA batteries, which can be re-charged using Brunton’s hydrolyser refill station (sold separately). One Hydrogen Core re-charges in one hour and is capable of five to six smartphone charges. The standard USB output is optimized for use on power tablets, smart phones, UV water purifiers, re-chargeable lights, GPS transceivers, and other personal devices. Available this fall. MSRP: $150; Brunton.com

When I got into this business some 30 years ago, we all dressed like we were in the Forest Service–solid dark greens and browns. Well, that look has gone the way of the dodo. Younger sportsmen have a completely different idea about how they want to look. Here’s what I’ve learned–the clothing they wear must perform at a high level, but they gotta look cool at the same time. Mountain Khakis, which uses the tagline “Life Untucked,” understands this new wave and has designed a line of clothing that is not only highly functional, but sharp looking as well.

I’m a convert and have been wearing their Granite Creek shorts and pants all summer. There is also a line of shirts, which you can get in a more traditional green (my choice), but also colors such as morning sky, celery, sand, truffle, and rooster. Main thing is the nylon fabric dries quickly and provides UVA-UVB 50+ protection as well. $82.95, pant; $64.95, short; $79.95, short sleeve; $89.95, long sleeve. Mountainkhakis.com

Deer camp will never be the same again. Inspired by the famous brick ovens of Italy, the Camp Chef Italia Artisan Pizza Oven features a domed oven top, rear vents, and a double-layered ceiling that mimics the heating patterns of a true wood-fired brick oven. A cordierite ceramic pizza stone promotes even heat and will give your pizza a delectable crust. The oven can also be used to cook breads, cookies, and pies. MSRP: $399; [campchef.com