Massive scopes are the rage. But how much power is too much? 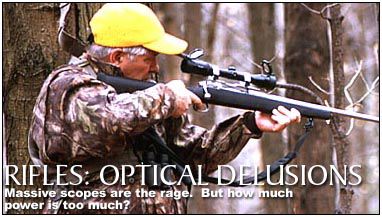 Last October, I hunted elk with a friend who carried an ideal rifle for the job. It was a .30-caliber shortfat, a light, handy little gun that was perfect for snaking in and out of a saddle scabbard, carrying on lung-busting sprints at high altitude, and weaving through the peckerpole pines at port arms.

The scope he had mounted on it was a 6X-18X variable that was suitable for shooting at tiny Coues’ deer at 500 yards or detecting life on distant planets. Its colossal bulk and weight completely nullified the lightness and handiness of the rifle.

He chose this behemoth on the recommendation of a gunmaker who hunted from tree stands a lot and had assured him that this 6X-18X was “the finest big-game scope” there was. Maybe; it was certainly a gorgeous piece of optics. But it was a poor choice for elk.

Optical Trade-offs Generally, shooters believe that more is better. Thus, we now have handgun cartridges of .50 caliber, rifles as mighty as the main gun on an M-l tank, and colossal scopes. In some cases, gobs of power are worth it. For prairie dog rifles, scopes of 30X or more are perfect because you’re shooting at a small target a long way off and you don’t have to carry the rifle. But for big game? No way.

When you increase the power on a scope, the laws of optics demand that it be longer and heavier than a less powerful instrument, and that weight and length will work against you. Not only do you have to carry all that weight around, but the crosshairs will appear to wobble more when you’re trying to steady them on a target, and the advantage you gain through increased magnification is more than offset by the twitches, lurches, and tics caused by all those Xs. If you’re hunting in hot weather, high magnification will also increase mirage-the shimmering heat waves between you and the target-and make it appear that you’re shooting underwater.

Scope Ethics One argument made in favor of using high-magnification scopes is that their light-gathering ability provides hunters with a few extra minutes of shooting light at the end of the day. I have a problem with this. If you don’t have enough light to track the animal, you have no business shooting at it, since even fatally hit critters can dash 100 yards before they fall. The fact is that any quality scope is plenty bright enough to make shots in any kind of reasonable light.

Recoil Dangers Heavy scopes on hard-kicking rifles can be a source of grief because all that recoil can cause them to shift forward in their rings, or can rip the rings out of the bases, or can in rare instances actually shear the bases off the rifle. The reason: When your rifle jumps violently to the rear, the scope wants to stay right where it is, putting an enormous strain on your mounts. If they’re strong, the scope will go along for the ride. If they’re not, you will be out of business until you can remount the scope and resight the rifle.

The largest telescope in the world is called the VLT and operates in the Chilean Andes. Its reflecting mirrors are 27 feet across, and it can clearly see a human hair at 10 miles. You don’t need it.