Pigeons In The City 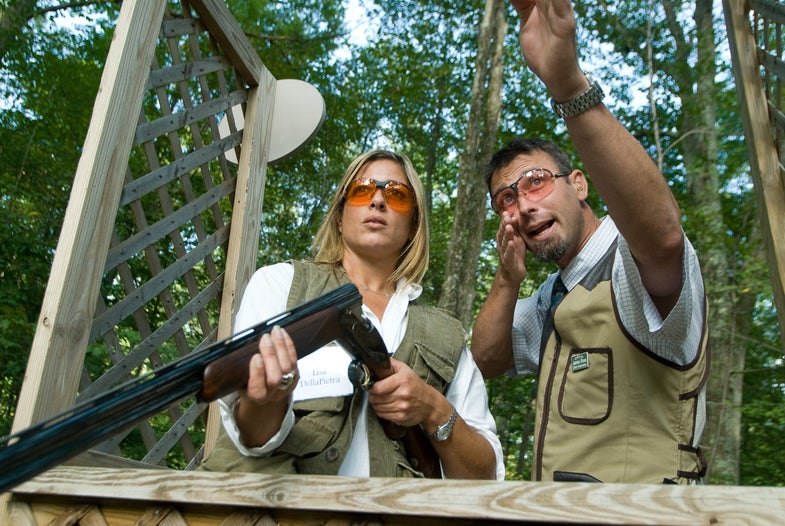 Had the haze and humidity of coastal Texas in August broken up, I could have seen the Houston skyline from where I stood, shotgun ready. Instead, I saw a pair of orange targets, launched from the traps at the American Shooting Centers in George Bush Park on the western edge of the city. At the end of a hot afternoon’s shoot, I was just minutes away from a cold one and a Cajun seafood dinner in town.

Many of the nation’s best clays facilities are surprisingly close to urban centers. Those listed here provide excellent shooting within 90 miles of a major city, and in some cases much less.

Minnesota Horse and Hunt Club
Minneapolis-St. Paul
Located in Prior Lake, half an hour south of the Twin Cities, Horse and Hunt was one of the first clubs in the country to set up a sporting clays course. Today the facility offers five courses of varying degrees of difficulty, all overlooking a pothole marsh. You can also shoot trap, skeet, and five-stand during your visit. There’s a fully stocked pro shop at the clubhouse, which is the home of Trigger’s Saloon and Supper Club (don’t miss the wild rice soup; it’s worth the trip all by itself).
• Contact: 952-447-4800; horseandhunt.com
• Distance from downtown Minneapolis: 25 miles

Ben Avery Clay Target Center
Phoenix
On the sporting clays course at Ben Avery, rabbit targets bounce among the cacti, leaving you no doubt you’re shooting in Arizona’s desert. Operated by the Arizona Game and Fish Department, Ben Avery has trap, skeet, sporting clays, five-stand, and FITASC (the most difficult version of sporting). There’s a comfortable Southwestern-style clubhouse with a pro shop. The facility also has rifle, pistol, and archery ranges and a campground.
• Contact: 623-434-8119; azgfd.gov/ctc2
• Distance from downtown Phoenix: 21 miles

Triple B Clays
Los Angeles
Steven Spielberg and Olympic medalist Kim Rhode are among the shooters you might spot at Triple B. The sporting clays course has 25 stations with beginner and expert stands at each. You’ll also find five-stand, trap, skeet, international skeet, and one of the few international trap bunkers in the country. Don’t miss bunker trap, which is to American trap what the Daytona 500 is to a drive around the block. The club has a fully stocked pro shop.
• Contact: 626-579-5201; ­triplebclays.com
• Distance from downtown Los Angeles: 11 miles

Cherokee Rose Sporting Resort
Atlanta
Only 10 minutes from the Atlanta Motor Speedway, Cherokee Rose is perfectly situated if you want to spend one day at the races and the next at the range. The fully automated sporting clays course winds through a forest of tall pines and old hardwoods. Shooters practice for dove hunting at a tower; there’s a two-story covered five-stand layout, as well as trap and skeet. The rustic Deep South-style clubhouse comes complete with rocking chairs on a porch that looks as if it should have hounds sleeping in its shade.
• Contact: 770-227-6569; ­cherokee​­rose​sporting.com
• Distance from downtown Atlanta: 31 miles

American Shooting Centers
Houston
Even in gun-friendly Texas, you might not expect to find such a large and complete shooting complex minutes from downtown Houston. Yet if you drive just 15 miles from center city, you can visit American Shooting Centers almost anytime and you’ll see Houstonians sighting in deer rifles and shooting trap and skeet, five-stand, and sporting clays. The three sporting courses also have nine high towers–more than any other club in the U.S.
• Contact: 281-556-8199; ­amshoot​centers.com
• Distance from downtown Houston: 15 miles

Colorado Clays LLC
Denver
Colorado Clays, on the Front Range of the Rocky Mountains, is minutes from the Denver International Airport and half an hour from downtown. The 15-station sporting course meanders along a cottonwood creekbottom, presenting both woods and open shots. A challenging 60-foot tower is among the highlights. Eight trap fields with voice-activated traps are available, as well as two skeet fields. There’s a comfortable clubhouse, and even a playground.
• Contact: 303-659-7117; ­colorado​clays.com
• Distance from downtown Denver: 16 miles

Orvis Sandanona
New York City
It takes an hour and a half to drive from New York City to the town of Millbrook, N.Y., but when you arrive you’ll feel as if you’ve gone back in time. With wood-shingled buildings and split-rail fences, Sandanona was once the private hunting lodge of financier Morgan Wing, whose guests included the likes of Teddy Roosevelt. Now owned by Orvis, Sandanona features a classic in-the-woods eastern sporting course, including one station where shooters climb a tower and fire at targets flying down a wooded ravine below them. There’s also a small Orvis shop, and if you need to brush up on your wingshooting or flyfishing skills, Sandanona offers classes.
• Contact: 845-677-9701; orvis.com
• Distance from Manhattan: 86 miles