These five pieces of advice for golfers can dramatically improve your shotgunning game. 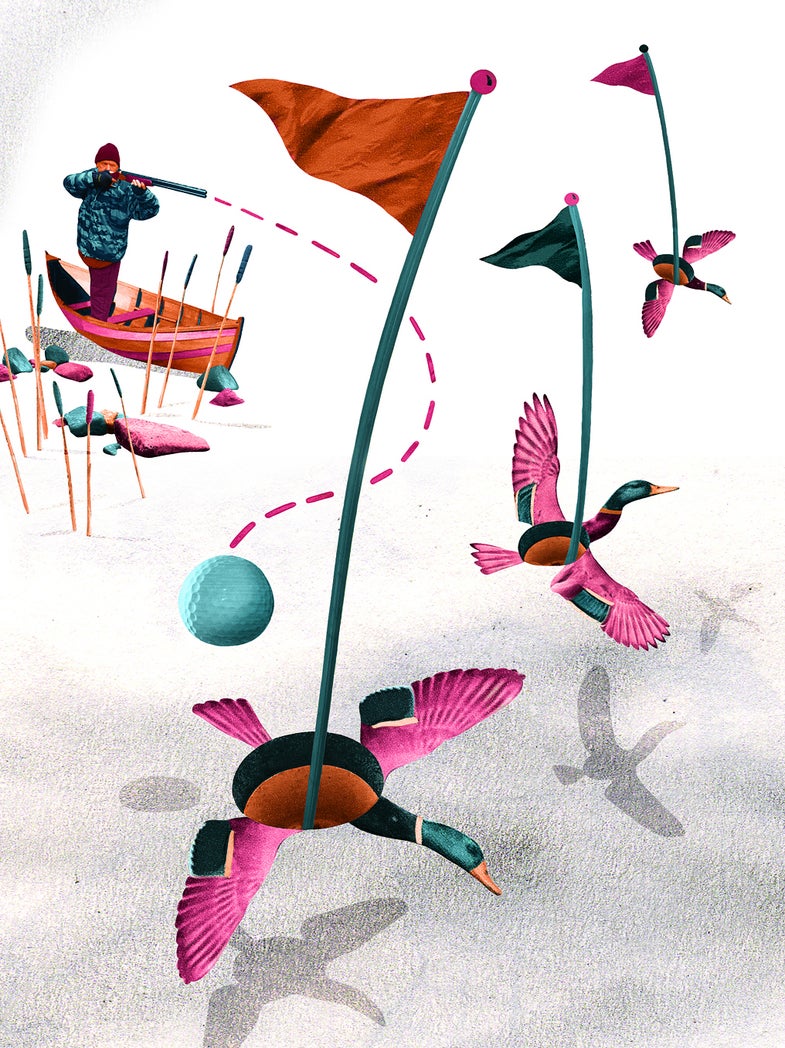 If you shoot at a whole duck and miss, you miss everything. Focus on the beak. if you miss that, you'll still hit the bird. Phil Wrigglesworth
SHARE

Like everyone, I have emptied my gun at birds that flushed underfoot without touching a feather. I’ve run 24 on the skeet field, then ruined my straight by missing the last target. I have shot both over and under standing gobblers.

In short, I have occasionally brought fresh meaning to the term full choke. You might have, too. It’s enough to drive a shooter to golf or, at least, to reading about golf. At any bookstore you’ll find a long shelf of self-help books with touchy-feely titles, like The Inner Game of Golf, Mind Over Golf, Deepak Chopra’s Golf for Enlightenment, and Zen Golf. Don’t laugh–what these books teach about the mental game of golf can help you become a better shotgunner.

Recently I read Zen Putting by Dr. Joe Parent and found myself nodding in recognition on almost every page. Many of his concepts amplify advice I’ve heard from shooting instructors and Team U.S.A. shooters. I called Parent to get details–only to find I wasn’t the first shooter to seek him out. “I coached a trapshooter for a year once,” he said. “She was browsing in a bookstore and found my book. We began consulting by phone. I helped her break her first 200 straight, which she did while competing at the Ohio State Shoot.”

The first step to better shooting, says Parent, is to stop beating yourself up over misses and enjoy what you’re doing. “People say, ‘I’d enjoy golf/shooting more if I was better at it.’ But that’s backwards. You get better at golf/shooting if you enjoy it more.”

Here are the top five lessons from Zen Putting, modified for shotgunners:

5 | Every shot is a learning opportunity. Watch someone miss. The first thing he’ll do is look down at the ground. Pro shooting instructor Gil Ash pointed that out to me at a clinic after he caught me studying my toes after a whiff. “It’s a way of denying the miss,” Ash said. “You have to admit that you missed. Look up at the spot where you missed the bird, replay what happened, and figure out why. Make a change and move on.”

If you don’t believe Gil Ash, ask four-time Olympic medalist Kim Rhode. She says, “Nothing I can do will bring the bird back. I just think about why I missed. Getting mad will only make me miss the next one.”

4 | First plan with your head, then shoot from your heart. Do your thinking before you pull the trigger. Plan where you will start the gun, where you’ll pick up the target with your eyes, and where you will break the bird. Then shut off your conscious mind and call “pull.” As Skip Smith, head instructor at Orvis’s Sandanona shooting school, says: “Your eyes will never lie to your hands.” If you don’t consciously override your eye-hand coordination, your inborn targeting computer will automatically put the gun in the right place.

3 | The most common cause of shooting behind is trying to be too perfect, too careful. Trying not to miss makes you miss. Golfers fearful of blowing putts slow their swing and leave the shot short of the hole. Cautious shooters do the same thing, measuring leads to be sure of a shot. Becoming overprecise, they slow their guns and shoot behind.

The solution is simple: Don’t worry. Shoot happy. What Parent writes about making a putt corresponds exactly to wingshooting: “If you are free from hope and fear about how the shot will turn out, you won’t decelerate.”

The world will not stop spinning if you don’t hit your target. Focus your eyes on the target and swing away. Remember you have a 3-foot-wide pattern to work with. You just have to put it in front of the bird.

2 | Small targets mean small misses. Parent counsels aiming at a precise part of the hole. That way you can miss your target by 2 inches on either side and still hit the cup.

Picking small targets works in shotgunning, too. When I teach new shooters, I tell them to focus on the ring around the bottom of the target. Misses and chippy hits suddenly turn into smoke balls. The more precise the visual input you give yourself, the better you will shoot. This advice carries over to field shooting, too. If you shoot at a whole duck and miss, you miss everything. Focus on the beak; if you miss that, you’ll still hit the bird in the front end.
**
1 | What the shot is for is a concept.** The bird is all that actually exists. That is the reality. Nothing more, nothing less. At a practice session with my son’s trapshooting team, I locked the trap to throw straightaways to see how many clays the kids could hit in a row. The first boy set the bar with eight. The ninth bird immediately became unbreakable for everyone. It was exactly the same target as all the rest, but because it meant something–the record–no one could hit it. One kid actually started shaking before calling for his ninth bird.

The remedy for pressure is to remain in the present. Think about how you are going to break the target, not about what happens if you hit it. In sports-Zen jargon, your thinking has to remain “performance oriented,” not “outcome oriented.”

I learned this the hard way one recent spring, watching a turkey strut to my calls across a plowed field. I wanted badly to kill the bird. I was thinking about what I would text to my friends about the hunt up to the moment I pulled the trigger. I lifted my head to watch the turkey fall, only to get a good view of it as it ran away.

Now, when a bird nears, I keep my thoughts performance oriented: I repeat “Kill him through the gun,” over and over. There’s plenty of time to compose clever text messages after the bird is tagged.