Are You Sure Your Game Meat Is Safe to Eat?

Always make sure to avoid the common dangers of eating wild game. 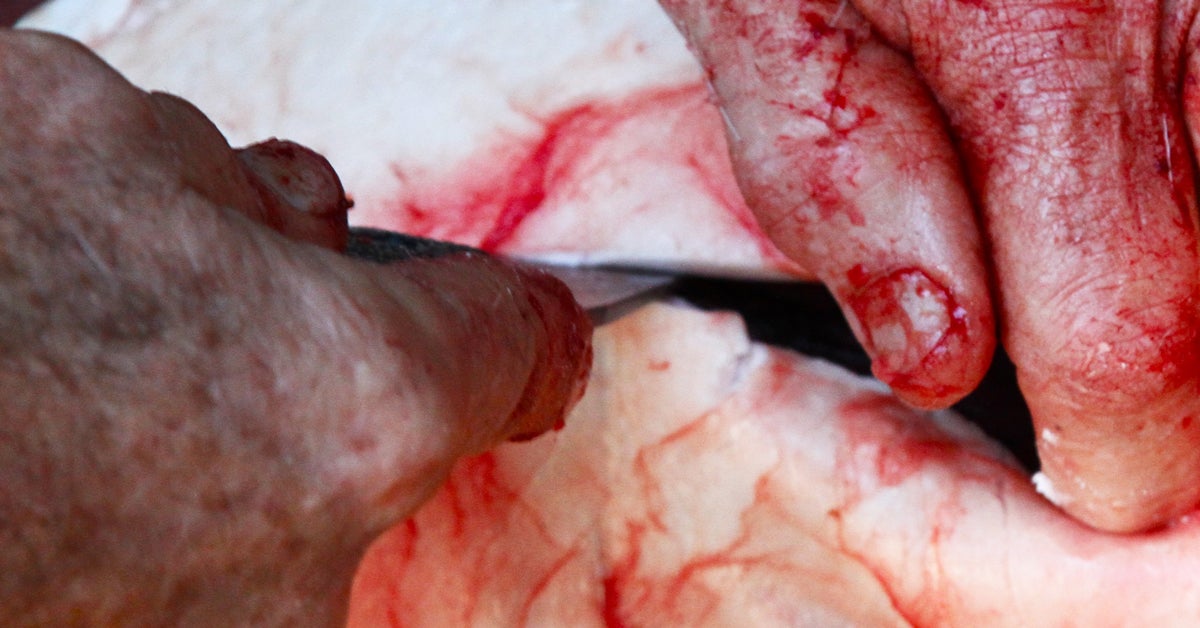 Despite all the news about chronic wasting disease, hunters are more likely to become ill from consuming meat that is in­fected with other diseases or carelessly prepared than from CWD. Here’s how to identify animals that are unfit to eat—and how to properly handle and cook game—so you can eat with confidence.

Use Your Common Sense

Once you’ve killed a game animal, examine the outside for sunken eyes or emaciation, scabby skin, tick infestations, or discharges of dark blood or creamy or green substances from orifices. Previously wounded animals may have maggot infestations or abscesses. Use your nose. Decaying flesh and gangrene emit a putrid odor.

If the outward appearance of the animal raises no red flags, don the surgical or dishwashing gloves you should carry for field dressing and run your hands over the body. Does the hair rub off easily? When you peel back the skin, is the underside soft or gelatinous, or does it have a film of blood or fluid that is not the re­sult of your gunshot wound? Does the body fat have a cheese-like appearance? Muscle tissue should be free of parasites and blood spots and should not smell bad. Blood clots in muscle tissue, black blood, or greenish discharge from organs are also signs of disease. Tan or yellow lumps on the inside surface of the rib cage or in lung tissue may indicate tuberculosis, which has been found in deer in Michigan; humans can contract the disease by handling or eating the meat. In­fected big-game animals should be reported. If you can transport the carcass safely (wrapped in plastic) to a fish-and-game office, you may be eligible for a replacement tag.

Upland birds and waterfowl should be examined for the same symptoms. In addition, check to see if feathers come off easily or if they have grown in a helicopter pattern over parts of the body. Discard birds that appear to be diseased.

Make Sure You Don’t Make Yourself Sick

In most cases of gastrointestinal distress, the problem is with the hunter, not the animal. Dr. Catherine Cutter, a food-safety specialist at Penn State University (whose booklets on processing game are available online at http://pubs.cas.psu.edu/), says that avoiding problems begins with four steps:

Wash hands before and after handling the carcass. Dress animals promptly on a clean surface, taking care not to puncture the stomach or intestines—but if you do, clean the inside of the body with antibacterial towelettes, alcohol rubs, or vinegar. Water encourages bacteria growth, so don’t use it unless absolutely necessary, and then dry the inside of the carcass immediately afterward.

Clean your knife frequently, especially after it comes into contact with the animal’s bodily fluids. Because some diseases are concentrated in the spinal tissues and brain, don’t cut through the backbone or eat the brains of any wild animal.

Food-borne illnesses can result from eating game that has not been dressed or cooled expeditiously. Bacteria thrive in moist, warm conditions, so bring the carcass to an internal temperature of less than 40 degrees as soon as possible. On warm days, speed the process by skinning your deer and filling the body cavity with bags of ice, water frozen in milk jugs, or sealed bags of snow, then tie it closed.

Normal amounts of bacteria can be killed by cooking meat to the correct internal temperature. But no amount of time in the oven can eliminate harmful bacteria once they have proliferated. And those are guests you don’t want at the dinner table.

Once you’re confident that the meat is safe to eat, follow these butchering basics to process your kill properly. Remember that hunting is a process that only ends after you have taken your first forkful of venison, when the life of one animal has been sacrificed to sustain another. Aging and butchering meat is an important link in this ancient blood tie, and it is not as difficult as most hunters imagine.

Hanging your deer improves the flavor and tenderizes the meat. Ideally, it should hang for a week to 10 days at a temperature between 34 and 37 degrees, with the skin on, the back legs splayed, the chest propped open, and the head hanging down to drain blood. At higher temperatures of up to 45 degrees, remove the skin first and reduce the aging process to three to five days.

2. Skin and Clean the Animal

Skin out the deer, remove the head and legs at the first joints, and wipe off any hair, mold, or blood from the carcass with a vinegar-soaked cloth. Then transfer it to a clean work surface and cut the carcass in half between the last two ribs.

Follow a butchering manual or the illustration here to render cuts for the freezer. Use a knife with a thin, slightly flexible blade of 5 to 7 inches.

Seal all cuts in plastic bags before double-wrapping them with freezer paper. Use the meat within a year. Ground meat with suet added should be eaten within six months.