Fitting Your Truck with Aftermarket Exhaust

Learn the ins and outs of getting a new (and more efficient) exhaust system on your truck. 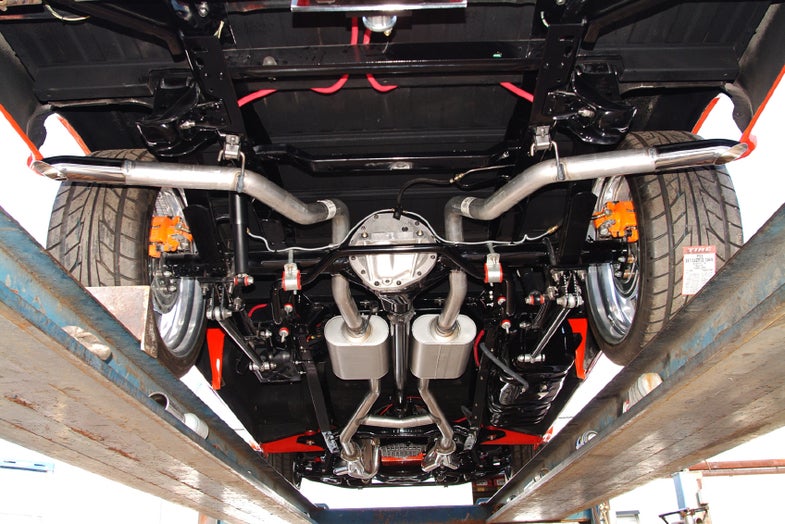 The Holy Grail for many hunters and fishermen isn’t an in-your-face largemouth that straightens a 2/0 hook or a big whitetail that makes the book. It’s a 4×4 with more power. Guys who push a four-wheel-drive pickup or sport utility to the limit by climbing high mountain offroad trails or horsing a boat and trailer off a steep, muddy boat ramp have learned that modern 4x4s all too often come up a bit short in the power department.

But extra power sometimes comes at a hefty price. A turkey hunting buddy put it to me point blank: “I want more power, but I don’t have the budget or the time for a complete engine overhaul or really expensive accessories. What can I do?”

As it turns out, plenty.

By focusing on the exhaust side of the engine, you can give a 4×4 much more seat-of-the-pants performance at a price you can bear. The reason exhaust modifications can pay off so handsomely is because engine performance boils down to combustion efficiency. For an internal combustion engine to make power, it must efficiently convert fuel into heat (power). How well it does this is a measure of its combustion efficiency.

Combustion residuals (exhaust gas) that are allowed to remain in the cylinders after each combustion process reduce efficiency, which translates into a loss of power. But if you can rid the engine of exhaust gas faster, you can increase the efficiency of the engine–and that means more power, better fuel economy, and improved driveability. Longer engine life can also result. All in all, pretty good benefits.

Head to Toe: The greatest gains will come from replacing the engine’s stock exhaust manifolds with headers. “Original equipment exhaust manifolds tend to compromise combustion efficiency, primarily because the factory needs to design vehicles for a very wide range of applications,” says Steven Anderson, special accounts manager for Flowmaster, an aftermarket muffler company. “When it comes to the specific uses that interest your guys–for example, heavy hauling, towing, low-range four-wheel-drive, and high-altitude operation–the factory manifolds can work against you. But aftermarket headers can change that.”

What exactly do headers do?

“One of the biggest obstacles to better performance is back pressure, which is the unwanted result of the system’s inability to remove sufficient spent gas,” says Anderson. “Back pressure causes some of the restriction in exhaust gas flow, as does the design of the stock manifold itself. Typically, a properly designed header is an arrangement of individual pipes that lead from the exhaust ports into a common passage, which eventually enters a muffler. Exact pipe size and length not only help determine how much but where in an engine’s rpm range power improvements are provided. Obviously, for trucks it needs to be in the lower range, below 4,500 rpm, where sportsmen need it most.”

So, bottom line, headers, when properly tuned, help improve overall combustion efficiency. And that, ultimately, is interpreted as seat-of-the-pants performance. But there’s something else as well. Headers can lower the underhood temperature, and that can help extend engine life.

“Cat” Kits: For maximum performance, a complete head to toe aftermarket exhaust system–headers, catalytic converter, muffler, and tail pipe–is the way to go. A less-expensive option is to retain the stock manifolds, but go with a cat-back (catalytic converter to tailpipe) aftermarket exhaust system. Typically, cat-back systems consist of replacement mufflers and tailpipes designed to reduce back pressure. As a rule, aftermarket cat-back mufflers are a re-design of stock mufflers, and are usually found in kit form along with larger-than-stock tail pipes that are specially bent to eliminate kinks or other exhaust-flow restrictions.

Cat-back exhaust systems are designed as stock replacement parts. This is a real advantage for the do-it-yourselfer, as such systems are direct bolt-on equipment that usually retain the factory mounting locations and pipe routing.

A cat-back system is significantly cheaper than a header-to-tail pipe system. Though the rewards are less, the vehicle will still perform better than stock.

Noise Vs. Performance: The third and least expensive option is to replace only the muffler.
“As exhaust gas moves from the engine to the tailpipe, it carries a hitchhiker of sorts in the form of sound waves,” Anderson says. “The muffler is really a network of baffles that bounce the sound waves around. As they bounce, they cancel each other out; when the waves finally pass out through the tailpipe the sound level has been greatly reduced.”

But the price for reduced noise is reduced performance. The typical muffler restricts the flow of exhaust gas, which increases back pressure, which leads to a reduction in engine efficiency and fuel economy. (Note: For the purposes of this discussion, we are not including the catalytic converter, which is another obstacle in the path of exiting exhaust gases. However, Federal emissions laws require catalytic converters, so any modification you attempt needs to include the converter.)

“As a rule,” says Anderson, “there are three basic types of aftermarket mufflers. The first is intended solely as a stock replacement part. You’ll get no performance benefits here. Its obvious asset is its affordability. The second type typically incorporates some form of sound-deadening material–such as fiberglass or steel wool–and an exhaust gas route that is essentially direct or straight through from inlet to outlet. This results in reduced back pressure, which translates into performance gains.”

Since type two mufflers rely on the packing material to reduce the exhaust noise, the decibel levels can sometimes rise to annoying levels.

“The third type of aftermarket muffler uses no packing material to deaden exhaust noise,” Anderson says. “Rather, it takes advantage of specially placed baffles that have been precisely located to cancel out certain sound frequencies as the sound waves progress through the muffler. In addition, the flow path of the exhaust has been designed to minimize back pressure. Typically, these mufflers, such as those manufactured by

Flowmaster, have come out of high performance and racing environments, but are now beginning to gain wide acceptance among outdoorsmen, especially those who tow boats.”

As you can expect, type three mufflers cost more because they do more. And though some truck owners always opt for cost over features, it’s best to balance cost, back pressure, and sound control. You may find that by shelling out only a few dollars more, you will get a remarkable improvement in performance.

You may also see performance gains that you didn’t expect. “Trucks that are used to tow or haul heavy loads generally place a big strain on their engines,” says Anderson. “When these engines work hard, underhood and coolant temperatures rise, and the entire power train becomes more labored. In really bad instances, the temperature may rise high enough to burn spark plug wires.

“Generally, a chronic overheating problem is attacked through the use of oversized radiators, auxiliary transmission fluid coolers, and cooler-running thermostats. Fact is, the problem may be solved, or at least minimized, by a reduction of exhaust gas back pressure. A freer-flowing exhaust not only can help an engine run cooler, but can also keep the exhaust gas from choking the engine–and that allows the engine to operate at higher efficiency, especially under towing loads.”

As you ponder your options, keep in mind that aftermarket muffler companies such as

Flowmaster offer a choice of sounds from quiet to mild to more aggressive tones–all with the same performance gains. So, you can pick the sound you want, though some outdoorsmen–deer and turkey hunters in particular–probably would be better served by a muffler that has been designed to minimize exhaust noise.