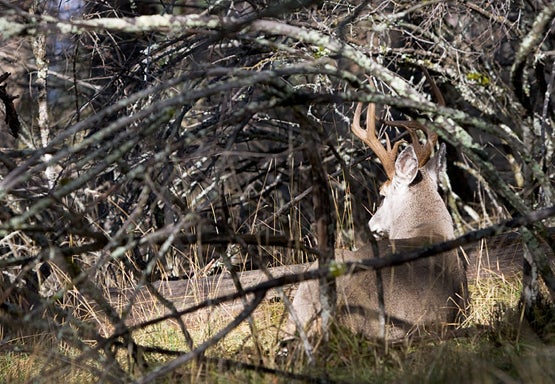 Whitetail beds may seem unimpressive compared with hot scrapes and fresh rubs. But what they reveal can add plenty of excitement to your hunts—and possibly lead you to your biggest deer of the year. By mapping fresh deer beds on your property, you can learn exactly where bucks and does are feeding and resting—the keys to virtually any successful ambush, all season long. So grab an aerial photo, GPS, or topographic map and a notebook to jot down key insights, including the size, number, freshness, and smell of beds, as well as nearby sign. Then lace up your boots and start searching for the following beds.

Look for multiple beds of various sizes in places such as cropfields, food plots, oak flats, orchards, and natural woods clearings. You should see feeding sign nearby. These beds tell you where whitetail deer congregate at night, giving you a valuable starting point for a morning hunt and for locating daytime beds.

Starting at the night beds you’ve already discovered, make loops into nearby brushy cover to pinpoint the daytime beds of doe family groups, including fawns and yearlings of both sexes. These beds should be clean and odor-free, with droppings of various sizes just a few feet away. The biggest doe beds will measure about 34 to 40 inches long, and the smaller fawn beds will be nearby.

In late summer and early fall, you’ll find these between one-quarter and three-quarters of a mile from night beds. Head uphill along hollows, ditches, and spur ridges to rugged terrain and pockets of dense cover, including blowdowns and brushy thickets. In flat terrain, check the heaviest cover and swampy areas.

Search for these in the most isolated patches of the thickest cover, such as a rugged hollow choked with deadfalls from a windstorm, or in the most overlooked cover, such as a dense thicket along the farmer’s driveway. These spots will hold one reclusive buck—often a giant. Look for rubs on ankle-size trees nearby, as well as large droppings around or even in the bed.

When the first phases of the rut arrive in late October, bucks abandon their thick, remote bedding areas and camp out in doe territory. Now’s the time to head just downwind of the doe beds you pinpointed earlier and look for the large, rank-smelling, oval impressions of a single rutting buck. Watch for brand-new rubs to pop up nearby.

When peak breeding ends, bucks and does will intermingle and bed close by but usually segregated by sex. Look for winter beds in evergreen stands, in thick, protected cover along stream bottoms, and on sun-soaked south- or southwest-facing slopes. Pay attention to the smallest doe beds; female fawns and yearlings often come into heat a month late. When they do, the area’s biggest bucks won’t be far off. ––Gerald Almy

A 5-Step Plan for Invading a Buck’s Lair

Don’t bother trying to walk up a bedded buck, some hunters will tell you. It’s too risky and almost impossible to pull off. But in fact, you’ve got nothing to lose when the buck you want goes nocturnal, when bad weather puts deer down during your only vacation days, or when the rut is about to pop and send your best bucks into the next county. I’ve personally taken several trophies by sneaking into their bedrooms. You can, too, if you follow this plan:

Ideally, you already know where several bucks bed on your property. Otherwise take a mental inventory of the best bedding cover—ridge ends, benches, high ground in marshy areas, thick cover. Because that bedded buck’s ears are constantly swiveling about to pick up the slightest sounds, decide which locations will enable you to move in quietly over damp soil, ferns, or moss-covered rocks, say, or along a windswept ridge, stream, logging road, or game trail.

In flat country bucks usually bed with the wind at their backs while looking ahead for danger. In hill country, they’ll bed high to sniff out trouble on rising thermals. In both cases, crosscutting the wind greatly reduces the odds that your scent will reach the buck. At which of your spots from Step 1 will you be able to make a quiet approach while keeping the wind on either cheek? Figure this out, and you’re ready to hunt.

An undisturbed buck will bed on the same ridge or small woodlot for days in a row—but rarely in the same exact place. He may pick a blowdown one day, an uprooted stump the next, and a sumac thicket after that. As you move forward, subtly zigzag toward likely cover, glassing very carefully. Don’t walk past any promising cover until you’re sure it doesn’t hold a buck.

You need to see the buck first. You should spend as much time looking through your binoculars as covering ground, maybe more. The buck will be lying down, so you’re not going to get a look at a whole deer. Watch for swiveling ears; antler tips; a white throat patch; a black, shiny nose or eye; the horizontal line of the back or rounded line of the rump. Anything that looks out of place could be a bedded buck.

Step 5: Wait for Your Shot

If the buck you spot offers a clear crack at the vitals, great. But don’t expect it. The body angle of a bedded buck doesn’t always allow a clean kill, and surrounding cover frequently obscures the kill zone. Never guess where the vitals are. Instead, sit tight. You’ve worked this hard to get close. Sooner or later your buck will stand up to reposition, browse a bit near his bedding area, get a drink, or head out to an evening food source. When he does, you’ll be ready. ––Bill Vaznis