How to Bag More Gadwalls While Duck Hunting

Gadwalls decoy beautifully and taste delicious. Here's how to successfully target them 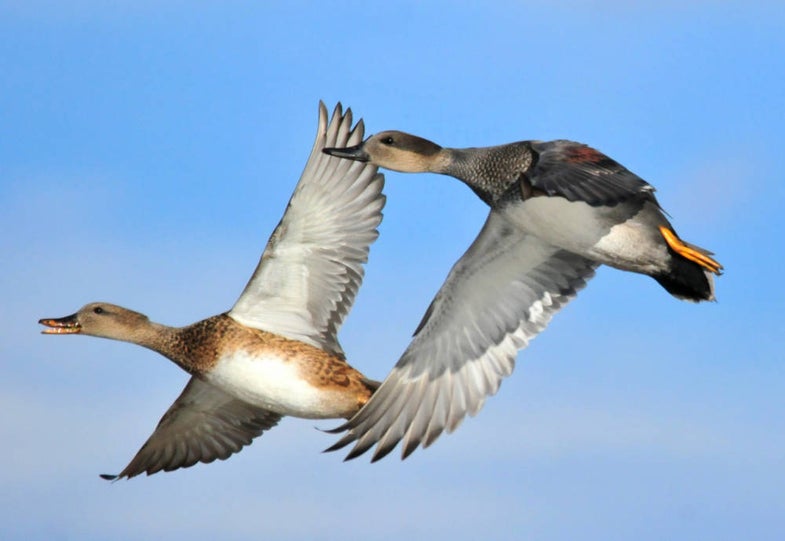 The gadwall has no glam. Its nickname, the “gray duck,” is the definition of dull. But a close look at the subtly hued drake shows that he’s every bit as handsome—in an understated way—as any greenhead or bull sprig. Primarily plant eaters, gadwalls make for prime table fare, and their numbers are plentiful in all four major flyways, especially in the Mississippi and eastern Central. Typically, the gadwall comes when called, but it’s no pushover. If, like most hunters, you’re just bagging a few incidentally with standard mallard calls and decoys, you can do better. Here’s how.

Adjust Your Spread to Include Gadwall Decoys

Talk to anyone who guns grays on a daily basis, particularly in the South, and they will insist that gadwall decoy best to gadwall decoys. Avery Outdoors makes very realistic gray duck decoys, as does Avian-X. Mojo Outdoors makes a spinning-wing model gadwall. You can simply mix gadwall blocks into your mallard spread, but I think the ducks work a little better into a group of six or eight gadwall blocks set apart from the main spread. When it gets very late in the season, put out more hens to capitalize on the early stages of pair bonding and breeding.

Traditionally, mallard calls have pulled double-duty for bringing gadwall to the gun, as the hen gray does sound very much like Suzie mallard. But there’s a difference. When you see gadwalls flying, use a faster cadence on your greeting or come-back calls, and create a dirtier or muddier tone by slightly increasing the hum in your throat as you call.

With practice, you can also imitate a drake gray’s odd, nasally dink…dink-dink…dink with a single-reed mallard call. But it’s much easier to do so with a gadwall call, which, owing to the ducks’ increasing numbers and popularity, has been introduced by call makers such as Phil Robertson and Rod Haydel. The Duck Commander Gadwall Call is particularly affordable, easy to use, and effective. A handful of dirty quacks and a few dink-dinks should finish birds right over your offset gadwall blocks for easy shooting.