Clean Machine Unlike many inexpensive bolt guns, the XPR is immaculate. Everything is tight and works smoothly.

Let’s begin with the really important stuff: XPR doesn’t officially stand for anything. I checked. The people at Winchester needed a name for their new rifle and rather than “Ralph” or “Cynthia” or “uMgugundhlovu,” they picked “XPR.” Having recently shot it, I can tell you what the X should stand for, but we’ll get to that. Whatever its name, the XPR is a 21st-century rifle, as different from its 20th-century ancestor, the Model 70, as your iPad is from the 1947-vintage family entertainment console of my youth, which covered an entire wall and featured a 7-inch black-and-white TV, a phonograph, and a radio.

An angular, streamlined bolt action, the XPR incorporates a heavy tubular receiver with a smallish ejection port, a massive three-lug bolt, an extremely stiff synthetic stock, and a superb trigger. Winchester was very clever here. While the receiver is a circle in cross–section, which makes it rigid, the surfaces that are bedded are flat, which keeps it from twisting and squirming. This goes to the very heart of modern rifle accuracy: If you design in rigidity, concentricity, and lack of stress on any one of the components; if you make the rifle so that it cannot twist, torque, bend, or flex; it’s going to shoot. Winchester did, and the XPR does.

Little X-tras
The XPR lists for $550, which puts it in the low to medium price range. These days, there’s no shortage of rifles in the $300 to $600 bracket. None are masterpieces of the gunsmith’s art, but some look as though their makers couldn’t wait to get them out the door. They’re rough and crudely assembled, with gaping spaces everywhere, mediocre to poor trigger pulls (despite loud bellows to the contrary), and a general air of shoddiness. A few, however, like the Weatherby Vanguard, are immaculate. And so it is with the XPR. There are no toolmarks, no egregious gaps; everything is clean and works smoothly.

There are also little touches where Winchester could have saved a few bucks but chose not to in the interest of making a better rifle. They incorporated the current Model 70’s M.O.A. trigger, which is not a cheap piece of machinery. On my test-model XPR, it gives a pull that is virtually perfect—no take-up, no discernible movement, and a 31⁄2-pound weight that feels lighter than it really is.

A word is in order about the original Model 70 trigger, which was admirable but flawed. It was a model of durability, but getting a decent pull from it required both time and skill with a hone, and if you didn’t apply both, it could be a real horror. The M.O.A. trigger is more complex, but it eliminates the time and the stone. All you need is a screwdriver or two and a couple of minutes, and you come up with a pull that would have an old-style Model 70 whining and snarling with envy. 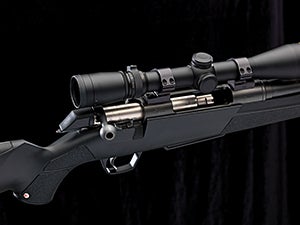 Work It  The three-lug bolt is strong and rustproof, and glides in the receiver.

The XPR’s push-feed bolt is coated with an electroless-nickel and Teflon compound that makes it glide back and forth in the receiver and also renders the part pretty well rustproof. The bolt itself has three lugs rather than two, and a short 60-degree lift as a result.

The receiver is drilled and tapped for 8/40 screws, which are much stronger than the standard 6/48 screws that usually serve.

A two-position safety lets you unload the rifle with the trigger locked away from the sear, if unloading the rifle bothers you terribly.

The gun feeds from a three-round, -single- stack detachable magazine that works just fine even when it’s zero degrees outside. I can say this because the first time I went to the range with the rifle it was zero degrees outside, and the magazine worked fine, although my fingers didn’t after only a few minutes.

It’s a Ringer
I tested the XPR in .30/06, and I installed one of the new Zeiss Conquest 2X–8X scopes, which cost more than twice what the rifle does. (If you don’t break your budget buying a rifle, you may be able to afford a costly scope, which makes a good deal of sense when you think about it.)

Despite fearful cold and high winds, the XPR shot extremely well. My average three-shot group at 100 yards, based on three groups from five different loads (see sidebar), was just under an inch. The best average group from a single load was .693. And this is a lightweight, undiddled-with hunting rifle, for heaven’s sake. Maybe the X is for “X-ring.”

Right now, the XPR comes in .270, .30/06, .300 Win. Mag., and .338. Weight is 7 pounds in the first two calibers and 71⁄4 in the magnums. You can get a camo stock for an extra $50. Barrel lengths are 24 inches for the standard rounds and 26 for the magnums, and if it were me, I would take my brand-new XPR to the gunsmith and have 2 inches lopped off the magnum barrel, because all that steel out front makes for an unhandy rifle, and you sure don’t need it.

But that is just my opinion. What is not a matter of opinion is that this is a very good hunting rifle and, considering what you get for its modest price, a terrific value as well.