Mauled: A Fight to the Death with a Black Bear

Shortly before midnight on Sept. 27, 2014, Brandon Johnson, 44, was helping a friend blood-trail a 525-pound black bear when it charged. 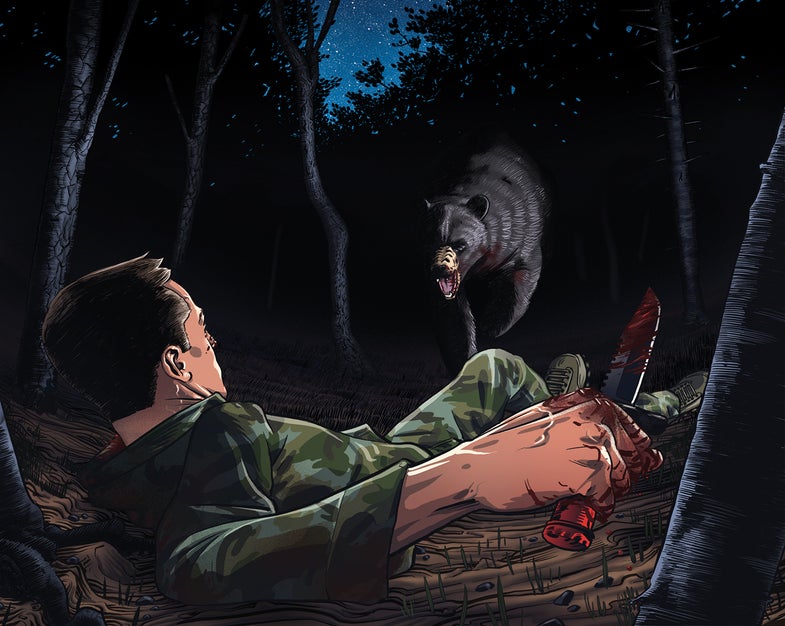 A stick snapped, and I said to my friend Trevor, “I think I hear it.” I took three steps to the left, and then…all I remember is lying on a plush mattress, staring at the stars, just kind of floating. That was the shock, I guess, but when I snapped out of it, the bear’s face was a foot away from mine, and I had both of my hands around his muzzle as it came down in slow motion and latched on to the left side of my face. He knocked me down in the mud and had my jaw in his mouth. I was thinking, I don’t want him to rip my face off. I had a knife in my right hand and I stabbed him in the face. When he released my jaw, I tried to sit up in the muck in order to get some leverage to shove my left arm as far as I could down the bear’s throat.

My headlamp had fallen behind my head and landed so it lit up the top of my boots and these three little saplings to my left. I lay there on my back for maybe five minutes. Stay quiet, I thought to myself. Don’t say nothing. Don’t say nothing. I kept repeating that. Then I saw the light beam around one of the little trees break with a shadow. I thought it was Trevor, but it was the bear again.

This time he came straight for my crotch. It was as if the bear knew that was the kill spot—all those blood veins. I locked my knees as he started biting at me, and that must have really pissed him off, because he came charging up to my chest again. He slammed my left arm away and opened his mouth so wide the black pupils rolled up into his head. I remember just his teeth and these white spots where his eyes were supposed to be, and I thought, This is it.

He was angrier this time. He was biting and biting and biting. Suddenly I heard a stick snap. I thought again that it might be Trevor, but it was the bone on the outside of my left arm. Then there was a second snap—another crushed bone.

All the while, I kept stabbing and stabbing. It’s amazing that I even had the knife. It was Trevor’s—some $8 flea-market thing. He gave it to me when I moved ahead of him on the trail, about a minute before the bear attacked.

After the bear broke through my left arm, he had my left hand in his mouth, and when he spun around, he twisted my wrist and hand all the way around, inside the skin, and snapped my thumb and ripped all the ligaments to shreds.

The bear backed away and left me in the dark. I don’t know how long I was there, but I could feel everything leave my body: all the hope and the fight just draining out like water in a tub. At first I was worried the bear would come back, but then I grew terrified of dying out there, so I started yelling. I just wanted to hear a human voice.

I heard noises behind me, then to my left. I saw the shadow in the light again, against those little trees, and the bear ran straight in and climbed on my chest. I had just enough time to use my right hand to drape my broken left arm over my face, before the bear opened his mouth again—like 10 inches wide, just unbelievable. At that moment, I knew: This is my chance. With all the strength I had left, I shoved the knife in as far and as hard down his throat as I could—so hard that I broke two fingers.

I pulled my hand back out and kept stabbing, but then started coughing and had trouble breathing. I was choking on blood. I was blind, too, because more blood covered my eyes. With so much blood loss, I knew I wasn’t going to survive. I wiped my right eye with my sleeve so I could see better, and that’s when I saw a 3/4-inch faucet of blood pumping out of the bear’s face. It wasn’t my blood. It was his. That’s when it hit me: I am going to kill this thing.

It seemed like the bear knew that the knife was what was causing him so much trouble. He grabbed my right arm in his mouth and chomped down twice, breaking my right arm. I could barely move by then. All I could do with the knife was wave it back and forth in a small arc in front of the bear. I just wanted to appear threatening. But when the bear saw it, he swatted my broken arms apart, smacked me in the chest, grabbed on to my right calf, turned me around, and slammed me into the ground like a chew toy.

After that, at last, he left for good.

Trevor said I wasn’t breathing when he and our friend Craig found me. They used ATV tie-down straps for tourniquets, and ratchet straps to strap my arms to my body. I walked out 700 yards, leaning on Craig and Trevor. God just helped me stand up. It took us two hours to cross a 5-foot-deep beaver slough and get back to the stand site before I saw the flashlights of the EMTs. They got me on a four-wheeler, which got me to an ambulance, and then to the helicopter. My first surgery was seven and a half hours long. When I woke up, I sat up and yelled: “Did they find the bear?”

That’s all I wanted to know. Did they find the bear? —As told to T.E.N.

Epilogue: Johnson has had six operations to address his injured arms and hands, with more to come. Nine months after the attack, he had not yet been able to return to his work as a general contractor, but he’s already been back to the bear woods to work on his treestand sites. He plans to hunt this season. “You have to face your demons,” he explains. Speaking of which: Yes, his friends found the bear. Bleeding profusely, it moved off about 45 yards, then turned around and laid its head on crossed paws.