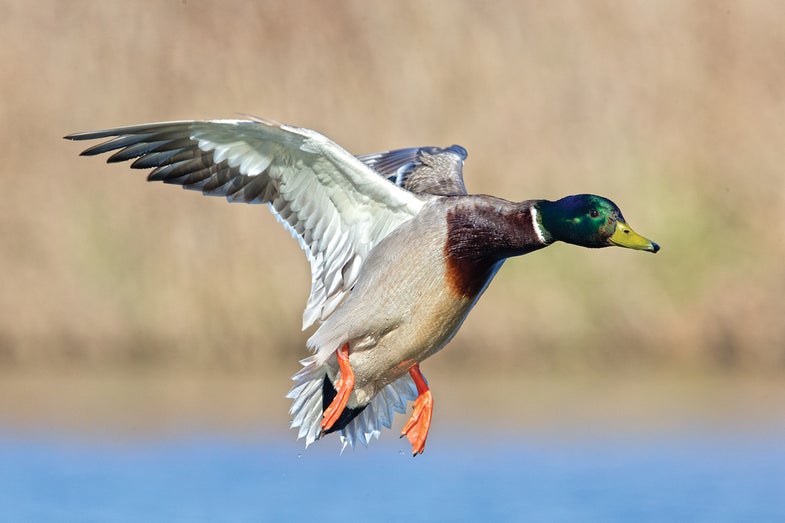 His Secret
When most hunters hear “duck field,” they think flooded corn, but Vandemore relies heavily on moist-soil vegetation like smartweed and wild ­millet—​stuff that’s naturally in the seedbed. “It has a lot of advantages,” he says. “It’s cheaper to grow, it holds its nutritional value longer than grain once it’s flooded, and early in the season, it’s full of invertebrates, which are a huge part of a duck’s diet.”

It’s also easy to establish. “You can take a farmer’s field that’s been sprayed and cultivated for 50 years, leave it alone for one year, and it’ll grow up fast in natural vegetation,” he says. “The good stuff is probably already in the ground, waiting to grow.”

His Method
Growing moist-soil vegetation is a simple matter of manipulating the water on a flooded field at the right time and then leaving it alone. To regulate floodwater, Vandemore uses pumps and six-board water-control structures, in which boards set into a levee can be removed to change the level. Starting around June 1 through mid July, he begins lowering the water on flooded fields by removing one board at a time. Vegetation grows quickly in the exposed areas and eventually covers the entire field once it’s drained.

When the greenery is thick and lush, he mows it (another advantage of natural stuff, since you can’t legally manipulate planted crops for waterfowl), puts the boards back into place, and then pumps in about 10 inches of water. “Flood the field when the average air temperature is above 55 degrees and you’ll get a lot more bugs,” he says. To start a new field or rejuvenate an old one, Vandemore plows or disks to disturb the seed bank, waits for natural vegetation to cover the area, mows, and then just adds water.

His Results
Vandemore’s fields see a steady swarm of ducks, starting with blue­wings in August, soon followed by pintails, gadwalls, wigeon, and mallards. Ducks keep using the fields until they freeze.
“We shoot plenty of birds over moist-soil vegetation through ­November,” Vandemore says. “I’ve always believed that if you can hold those early ducks as they’re on the way down, you’ll hold the birds behind them, too.”

✖”Pick your decoy spread up after every hunt or you’ll ruin a good field.”
✖”If it’s colder than 20 degrees, don’t hunt until midmorning. Otherwise, you’ll blow ducks off the field in the dark, it will freeze, and they won’t come back.”