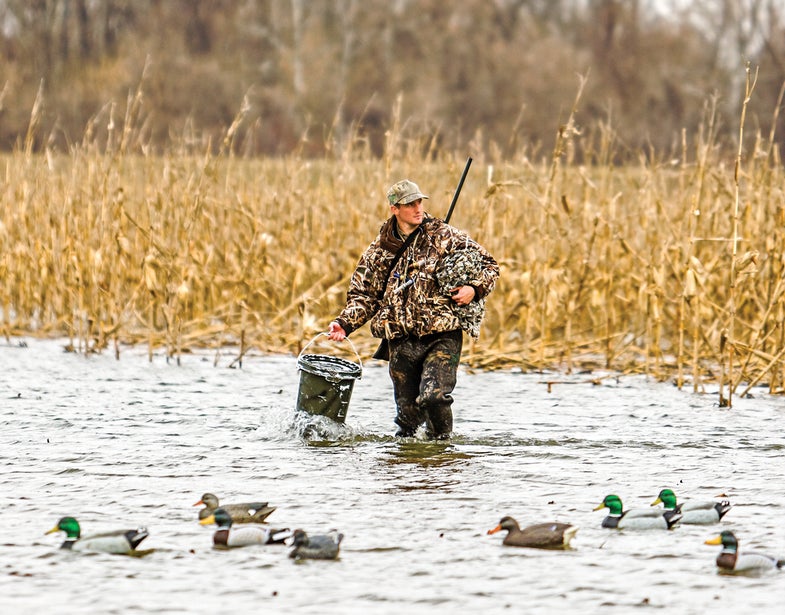 His Secret
Jasion, an F&S Hero of Conservation, banks on resting ponds. On Maryland’s Eastern Shore, most hunting properties are 100 acres or less, and most duck holes are created by flooding a stand of corn. “Over the years, I’ve noticed ducks often feed in flooded corn all night, then leave to rest somewhere else during the day,” he says. “I have two ponds on my place—one is an acre and the other is 2 acres. I converted the larger one from a feeding area full of flooded corn to an open-water resting area. When I did that, we started shooting a lot more birds.”

Jasion also maintains a dry, 30-acre cropfield planted in either corn or soybeans, where he typically sets up to goose hunt. The resting pond helps keep the geese on his ground as much as it does the ducks.

His Method
“Clear water is the key,” Jasion says. Just any old farm pond won’t do. “The shallow point of my pond is 6 inches deep, and the deep end is 3 feet. I leave it full of water year-round, but I run Ice Eaters all summer to keep the water moving and clear of algae. I also treat it periodically with algicide. Every couple of years, I drain the pond so the moist-soil vegetation grows back up, and also to keep the bottom from becoming too silted in.”

Jasion still drains his smaller pond and plants corn or sorghum around the edges—and it still holds ducks—but the larger body of open water is the key attractant with so much flooded corn already in the area.

His Results
“We shoot ducks over the pond all season long, and it holds ducks all the way through the following July,” ­Jasion says. “We get a lot of wood ducks nesting around it, and we hunt them once the early season comes in.” He also gets mallards, black ducks, and wigeon through January. Most of his goose hunting is done in the field, where he and his hunting partners can usually get their limits. “But we’ve had some excellent goose hunts on the pond, too,” Jasion says. “We’ll kick up 300 to 400 geese from it before daylight on any given morning.”

✖”To manage pressure, never jump-shoot a rest pond. Walk the birds up, and then hunt the singles and small groups as they return.”
✖”A-frame blinds are easier to shoot out of, and they allow you to watch the birds work. People think they spook birds, but they don’t.”