For these prized ducks, the reward is the adventure, which may take you anywhere from Mexico to the Bering Sea.... 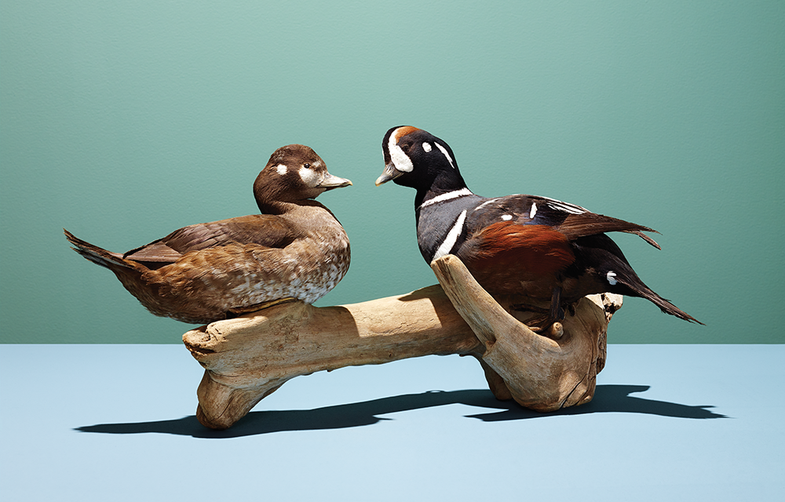 For these prized ducks, the reward is the adventure, which may take you anywhere from Mexico to the Bering Sea. And they make for some awesome mounts, too

✕ A drake mallard is a trophy that can be found just about everywhere. But the most sought-after species among diehard duck hunters are more rare, more specialized, and more challenging to kill. Enduring the bitter late season is often required just to see one of these birds in full plumage. All of these species are revered for their striking beauty, but the journeys required to find them—from southern sheet water to the Alaskan surf—are as much a part of the trophy as the ducks themselves.

➞ Pintail numbers are down slightly this year, and the breeding population is 24 percent below the long-term average. Still, they’re an abundant duck within their favored wintering grounds during the season. California hunters even complain about their two-bird limit because there are days when pintails are all they see. California and Texas are the top pintail states, in large part because both grow lots of rice. Pintails love rice, and the open water of a flooded field suits their wary nature.

Trill sparingly on a whistle, hide well, and be ready to take a long shot when pintails are standoffish. They are cautious ducks, prone to circling high and descending slowly. They work best on sunny days and turn skittish when it’s cloudy. While pintails love flooded ricefields, you might shoot a bull sprig in an open hole on one of the tule marshes in California’s refuge system, or in a dry field over a snow goose spread in Texas.

Harlequin numbers are stable, and increasing slightly. Still, harvest is tightly controlled. Washington allows hunters one bird per year; Alaska, four. Alaska’s harvest of 2,200 birds is the highest in the nation.

A harlequin hunt is a day at the beach—­literally. The ducks feed off pebbled shores where they dive for crabs and fish. Toss out a dozen decoys, hide among the shoreline rocks, or in some cases just take a low seat on the beach, as harlequins are not particularly wary ducks. Take turns with your hunting partners spotting with binoculars and shooting to be sure that you target mature drakes.

➞ Early migrants, blue­wings are through and gone from most places long before they reach full plumage. Few hunters, save for those in the deep South, ever see a drake in nuptial wear. This year’s population is the third highest ever, and Texas and Louisiana lead the way in annual bluewing harvest. The southern reaches of those states, and Lake Okeechobee in Florida, are the top spots unless you want to hunt Mexico or Nicaragua.

Bluewings dabble in shallow water and mudflats, and they respond well to spinning-wing ­decoys. Although teal decoys are available, blue­wings work readily to any blocks. Some hunters prefer to set mallard decoys due to their larger profile, which ducks can see better from a distance. You can make the shrill high­balls of a bluewing hen on a teal call or on a regular mallard call, or you can replicate the sound with your natural voice—a technique old-timers call “laughing them in.”

➞ A duck of the Atlantic and Mississippi Flyways, the black duck is most often associated with the salt marshes of the eastern seaboard. Its numbers have declined since the 1950s due to habitat loss and hybridization with aggressive mallards. The limit stands at one bird a day. Up to 70 percent of the Atlantic Flyway popu­lation winters in Delaware Bay, but New York typically has the highest harvest. Hunters took 16,271 black ducks in New York in 2014.

Famously wary—­waterfowlers used to swear black ducks could smell hunters—these birds work best to small spreads. Put six mallards in one group and two to four black duck decoys a short distance away. Black ducks may work a spread alongside a flock of mallards, but you may have to let the mallards land to get your chance at a trophy. The drakes and hens look similar. Pick out the drake’s darker head and yellow bill.

➞ Winter on the Bering Sea will test the toughest hunter, but the potential reward is one of waterfowling’s rarest trophies—the king eider. These large sea ducks breed above the Arctic Circle and migrate to Alaska and the east coasts of Canada and the U.S. They are hunted primarily off the Alaska Peninsula and the Aleutians, where the limit stands at four a year. The king eider’s remote range makes the species difficult to count, but a 1990s survey estimated a fluctuating popu­lation of around 375,000, with a near 50 percent decline since the 1970s.

A king eider hunt may take you up to a mile offshore where you’ll hunt over a longline of decoys and use a black flag to lure birds close. Spend the extra money and shoot 3- or 31⁄2-inch Hevi-Shot 4s, and be ready to hit birds again on the water if they show signs of life. King eiders are tough birds that can dive to 100 feet, making clean kills imperative.

➞ Prized by chefs in the days of market hunting, a canvasback is a trophy duck today. It is no longer an abundant species, but the population, according to the most recent U.S. Fish and Wildlife survey, is 30 percent above the long-term average. Federal guidelines allow a limit of two canvasbacks per hunter, per day, in ­every flyway in 2015.

The can’s reputation as the finest tasting of ducks rests on its fondness for eating wild celery, but they feed on a variety of aquatic plants. Chesapeake Bay and the Upper Mississippi River are steeped in canvasback hunting tradition, but hunters in Louisiana, Texas, and California shoot more birds. As with most diver hunting, a big spread on open water pulls in cans. Most hunters rig 100-plus decoys on longlines, and many rig drakes only, as their white bodies are more visible. Some Midwesterners increase visibility further by adding a pair of trumpeter swan decoys.