Readers opine about mounts and more in our trophy survey. The results, of course, are wildly opinionated. 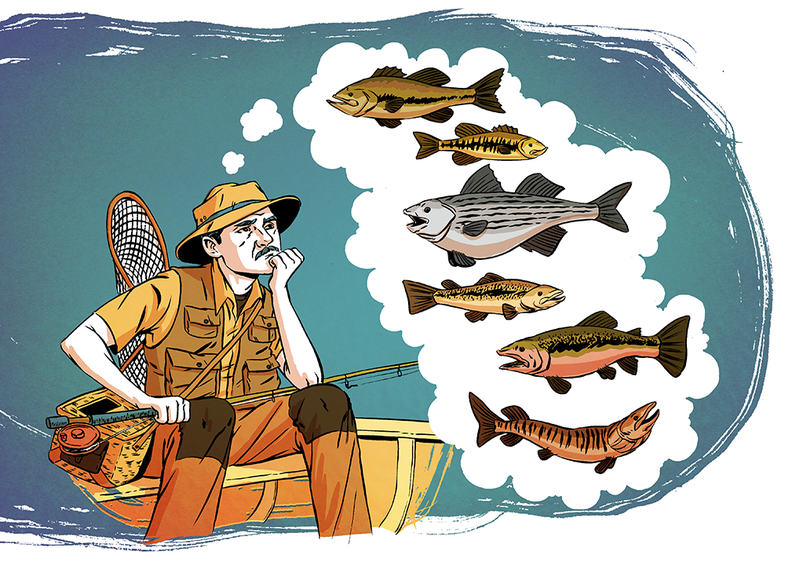 Hunting and fishing trophies are a little like fantasy football teams: It’s much more fun to talk about your own than it is to listen to others go on and on about theirs. That’s part of the reason we conducted this reader trophy survey​—to give you all a chance to share your stories. But more than that, we were genuinely curious as to where you stand on trophy hunting and fishing, and what your idea of a trophy really is. Another mount for your home? A freezer full of meat? Or simply the time spent outside? All we can say is we’re glad we asked, because your answers were thoughtful and, in some cases, surprising. See for yourself.

“Yes, I am. Because every animal harvested is a trophy.” —Daniel Merck

“For me, the experience is the trophy. The harvest is just icing on top.”—Harrison Basham

“I eat meat. Horns are no good. I don’t care how you cook them.” —Dustin Hess

“I hunt to hunt. I won’t pass on a trophy, but it’s not my reason for ­hunting.” —Terry Johnson

“I am a new hunter, and my priorities are improving my skills, filling the freezer, and introducing new people to go hunting with me.” —Shawn McCardell

Which of these trophies would you most like to catch?

You kill a big gobbler. If you had the choice between keeping the beard for a trophy or the drumsticks for eating, which would you choose?
A. “I’m a leg man.” 67%
B. “The beard, man!” 33%

What’s the most money you’ve ever spent on one mounted trophy?

When blood-trailing a trophy animal, what are you most interested in recovering?
A. The meat 84%
B. The head 16%

To me, a trophy turkey is:

Agree or disagree? Catching a trout on a fly you tied makes the fish more of a trophy.
A. Agree 96%
B. Disagree 4%

What do you love most about trophy hunting?

“The chase. Sometimes once the hunt is over, and the excitement has died down, I’m almost in remorse that my tag is filled.” —Andy O’Dell

“The challenge. The work. The harvest. The story.” —Brian Butcher

“The satisfaction of putting in the work, and the patience to pull it off. These animals don’t become trophies by being easy game.” —Josh Hileman

“A trophy gives me a ­reason to hunt longer. I also love big racks on the wall.” —Kyle Almeling

When it comes to a fish qualifying as a trophy, what’s the most important ­determining factor?
A. Size (length and/or weight) 46%
B. How you caught it 29%
C. Who was fishing with you 15%
D. A healthy release 7%
E. How it tastes 2%

Which is the better whitetail trophy?
A. A 10-pointer with a bunch of kickers and stickers 63%
B. A clean typical 10-pointer 37%

What do you hate most about trophy hunting?

“The pay-for-what-you-kill hunting farms. Doesn’t seem right to me at all.” —Jon Schaumann

“The negative connotation that goes with the phrase. It keeps people from making the connection between hunters and conservation.” —Jennifer Wells

“TV shows that make it seem like there’s a Booner around every corner.” —Brian Woodford

Have you ever retired a lure or fly after it caught a fish you considered a trophy?
A. No 74%
B. Yes 26%

“I retired a green pumpkin Zoom magnum lizard that I caught my personal best largemouth bass on. My soon-to-be wife doesn’t know it yet, but I’m going to frame the lure and hang it on our living-room wall.” —Patrick Finucane

“My grandfather’s red-and-white Dardevle. I was given the lure after he passed away, and on a trip to Canada, I caught my biggest northern pike ever with it.” —Ben Anderson

“Catching a record largemouth at a location not commonly known as a bass haven.” —Mark Folsom

“New Zealand with my husband for Tasmanian trout.” —Linda Kuersten

“I’d go anywhere to catch anything, as long as I’m with my boys.”—Jeff Kreager

“Bluegills with my daughter on our farm pond.” —Joshua Jenkins

When you walk into a room practically covered in taxidermy, you think:
A. “Buddy, I dig your style.” 90%
B. “There’s gotta be meth houses with more style than this.” 10%

Who decides where your mounts go in the house?

Hypothetically, which trophy buck would you remember most?

A. “The basket-racked 6-pointer I killed on public land. I hiked a mile from the truck with a climber on my back to get him.” 48%

B. “The 10-pointer that I shot in the food plot I planted on my farm. I worked all summer to make my farm better, and I must have had a thousand trail-camera photos of him.” 46%

C. “The Booner I killed on an outfitted Saskatchewan hunt. I saved for two years to take that trip, and sat for five days in a cold blind before I shot him.” 6%

“Brown bears with a bow in Alaska. I’d bring my daughter.” —Greg Stanton

“I’ve never hunted elk, and my dad has tried unsuccessfully. A dream of mine would be to go on an elk hunt with him and for him to shoot a trophy bull. I think any bull would be a trophy in our eyes.” —Jeremiah Feltz

“A bighorn sheep hunt, packed in on horses, anywhere from New Mexico to Alaska with my son and son-in-law.” —James Smith

Which whitetail mount would get a more prominent display in your house?
A. A 140-inch buck killed with a bow 67%
B. A Booner killed with a gun 33%

When you hear the phrase trophy hunting, what comes to mind?