Team Up With a Buddy and Call in Winter Coyotes

Work with a hunting buddy to call in—and kill—hungry coyotes in the winter woods. 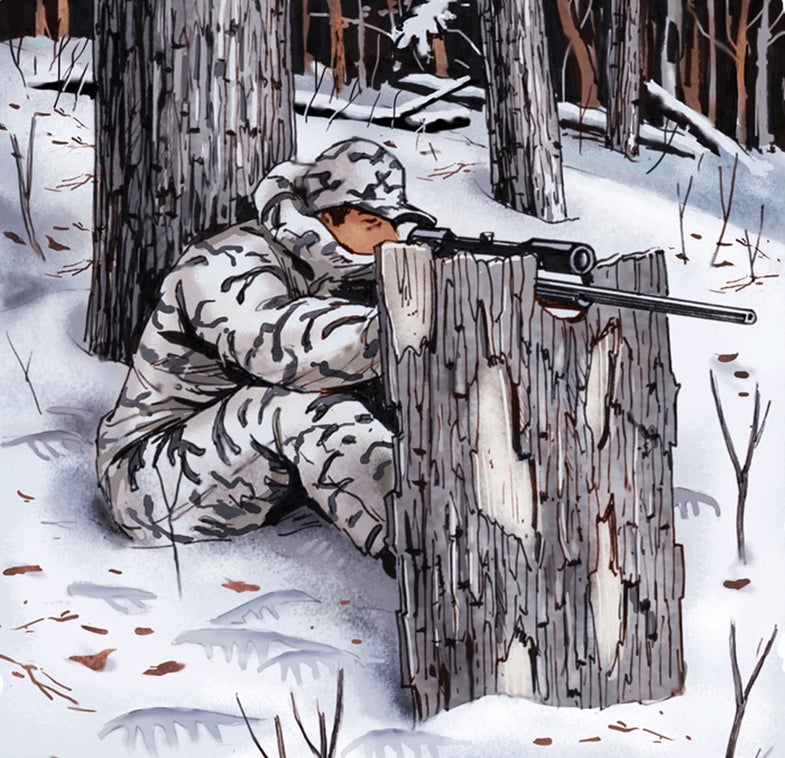 After deer season, you can put away your blaze orange but not your rifle. Instead, hang a predator call from your neck, put on your warmest camo, and call up a buddy. Coyotes are desperately hungry right now—when they’re constantly burning energy to stay warm. As a result, they become less cautious and more inquisitive, making late winter a hunter’s best chance to call one in. After a fresh snow, get outside and look for tracks. If you find a pattern—or simply a lot of tracks—you’ve found where to start your quest.

A buddy system—with a shooter positioned 50 to 100 yards ahead of the caller—is ideal when the bare trees make it easy for a coyote to spot a caller. Wear snow camo and move as little as possible, as plenty of hunters have had coyotes come in and spooked them off without realizing it. Consider using a motion decoy that’ll draw away the coyote’s focus.

Before coyotes move in for a kill, they’ll almost always circle a call to get the wind in their favor. Set up in places where a coyote will have to expose itself to the rifle just before it gets a strong whiff of you. Position yourself so the wind is quartering or blowing from you toward the kill zone where you can see the circling coyote as it emerges from cover.

Hungry coyotes will loiter in heavy cover near livestock or concentrations of deer. If there’s a farm or a nearby cropfield that attracts herds of animals, set up on a field edge and call into bordering creeks and woods to coax coyotes into range.

Howl at the Moon

Professional coyote hunter and calling champion Les Johnson says coyotes are much more vocal and responsive to howling in late winter. Try nonaggressive, forlorn-sounding howls to locate coyotes, then move quietly in their direction before setting up and using a distress call.

Stick to the Path

To cover ground quickly and quietly, coyotes will often take the easiest path on their way to a potential meal. Be ready for coyotes sneaking along logging roads, frozen creeks, and field edges and set up appropriately.

Must-haves for a winter coyote hunt

This is a square piece of plastic that, with its molded-bark exterior and realistic paint job, looks just like a tree stump and works great for coyote hunters. $200; natureblinds.com

Professional coyote killer Les Johnson designed this single-reed call. It’s versatile, and with practice, any hunter can master it. $30; predatorquest.com