When hard-hunted gobblers turn a little wary, set up an ambush over an entire flock of fake turkeys 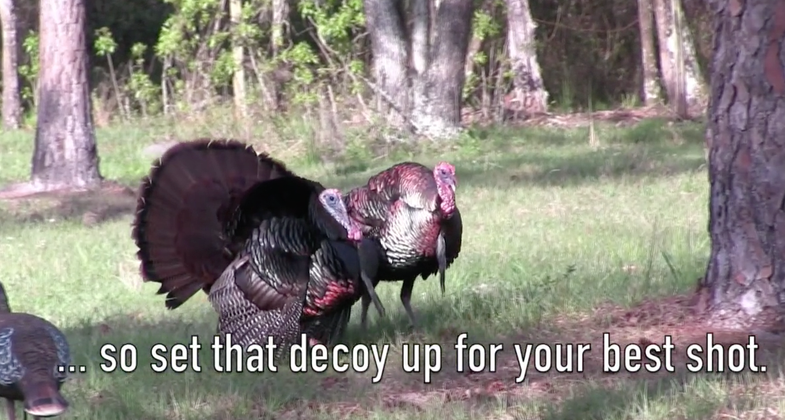 The Ultimate Decoy Spread for Pressured Gobblers by FieldandStream

Are you hunting an old bird that just won’t mind his manners and walk into shotgun range for you? It might be time to show him something new. When hunting pressured turkeys on small tracts of ground (which might prevent you from moving into a better position), setting a “mega-spread” of decoys can do the trick. Flocks of five or more turkeys are common, especially in the early season. Often, there’s a dominant gobbler, several hens, and maybe a straggler jake or two. The idea with this spread is to replicate that—sans the dominant gobbler. Sticking to mostly hens and a jake seems to work especially well for luring in live hens, which may be the only way to get your ornery gobbler into range. Few hunters are going to deal with the hassle of carrying all those decoys afield, and so it’s a setup few live turkeys ever see.

Obviously, this isn’t a run-and-gun tactic, so I like to use this setup in the open, where it can be seen from a distance, and where I plan to be sitting for awhile. A pop-up blind makes those long sits easier to endure. Spread the decoys out; live turkeys don’t typically bunch up tightly unless they’re spooked, and they’ll feel more comfortable working through the spread if there’s some room. And leave the jake decoy in your best shooting lane, since most committed toms will try to run him off first.

I like realistic decoys, and the spread in this video consists of Avian-X and Dave Smith Decoys. Obviously, that’s a pricey setup. Like setting silhouette decoys in a goose field, though, the profile is the important piece to this strategy. Bulk up your spread with cheap foam hens if necessary, and splurge on the jake, since that will probably grab your gobbler’s focus.