Photo by Brian Grossenbacher Your choke is too tight, you have trouble with left-to-right crossing shots, and you forget to... 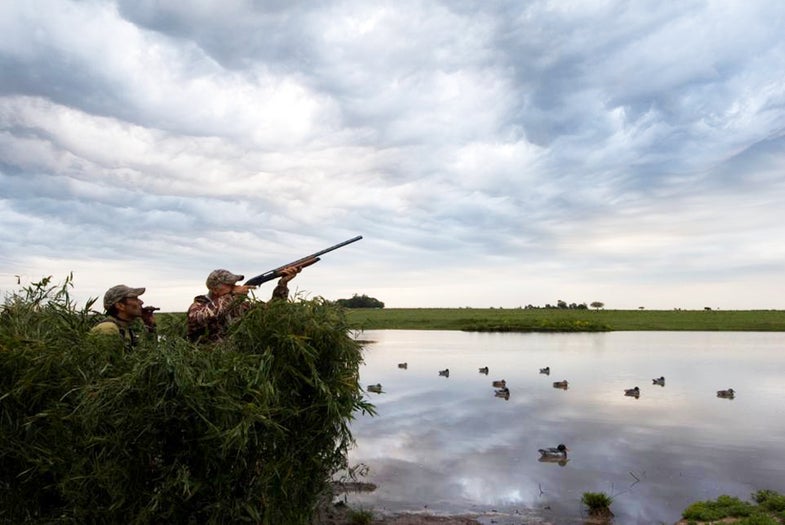 Your choke is too tight, you have trouble with left-to-right crossing shots, and you forget to bring gloves. How do I know? I have my eyes in the blind: 13 waterfowl guides who responded to my recent survey.

Collectively, this group guides more than 650 days a year, from Alaska to Rhode Island. Their clients number nearly 2,000 annually, ranging from novices to hardcore hunters. What they had to say about waterfowl hunters was illuminating and will help you bag more birds. Here are the most interesting questions and answers:

1 |Do your clients use too much or too little choke?
With one exception, the guides said hunters show up with too much choke in their guns. “Most of the folks we see don’t get out a lot throughout the year and would be better off shooting a wider pattern than a smaller one,” notes Tony Vandemore of Habitat Flats in Missouri (habitatflats.com).

Fortunately, in this era of choke tubes, it’s easy enough to switch to a more open constriction. Most of the guides recommended Improved Cylinder or Modified as the best choice, and they estimated the average shot in their blind was only 22.5 yards, well in range of an IC pattern. The takeaway here: If you set your decoys right and hide well, water­fowling is a close-range sport.

That exception? Capt. Brian ­Rhodes of The Swampers Waterfowl Hunting in Rhode Island (the​swampers.​com). ­Rhodes guides hunters for eiders and scoters and recommends Full choke to put the maximum number of pellets on target. “Sea ducks are built like tanks! Let ’em get in, and shoot ’em,” he says. “If they look alive, shoot ’em again; if they look dead, shoot ’em one more time.”

2 |What load do you recommend?
If money were no object, the guides I surveyed would have their clients shoot Hevi-Shot or one of the other tungsten-iron premium loads. Steel is much more affordable, however, and at the modest ranges where most ducks and geese are actually killed, it performs very well.

“I recommend steel. I feel like manufacturers have come a long way with steel since it first came along,” says Hunter Johnson of Missouri’s Locked Wings & Labs (lockedwings.com). The guides recommended 3-inch No. 2 shot for ducks, 3 or 31⁄2-inch BBs for geese, with many of them noting that high-velocity loads traveling 1450 fps or more kill the best. Perhaps that’s why seven of 13 guides personally shoot Kent Fasteel, which reaches velocities up to 1625 fps.

3 |What shooting errors do you see hunters make most often?
I got 13 different answers to this question, ranging from “they flock shoot” to “they catch their stock on their armpit or sleeve.” To me, most of the errors the guides listed are symptoms of a root cause: Hunters get excited and rush the gun mount and the shot when they don’t have to.

Birds over decoys have no idea you’re there, and you have more time to act than you think. “Good waterfowl hunters are calm when a flock sets up in the decoys and they understand what the birds are going to do,” notes Shawn Nyholt of Pro Staff Outdoors in Saskatchewan ­(sask​­goose​­hunting.com). “Their shooting is relaxed, whereas a guy who shoots trap only will get very excited.”

Alex Langbell, a former Washington guide who now makes waterfowling videos ­(basin​water​fowl.com), offers perfect advice: “If hunters would slow down and count to two while picking out a bird, then shoot, their average would go up.”

4 |What shot do your hunters miss most often?
Eight out of the 13 guides said that hunters have trouble with crossing birds, with three specifically mentioning left-to-right shots. These give right-handed shooters trouble because as they swing to the right, they use too much arm and pull the gun off their cheeks (swinging left, right-handers push the gun into their faces). Once the stock loses contact with your face, the gun no longer shoots where you look. You have to learn to swing the gun with your body, not with your arms, even when you are sitting down.

Crossing shots in general give hunters trouble because many people aren’t comfortable leading targets. “People shoot behind passing birds—they stop [the gun] when they pull the trigger,” notes Tim Bouchard of Alaska Wildfowl Adventures (akduckhunts.com).
The solution is simple: Practice on the skeet field. Stations 3, 4, and 5 present extreme crossing angles. Keep all your focus on the front edge of the target and let the gun find the right lead by itself.

The No. 1 reason people stop their swing is because they look back at the bead to measure their lead. As soon as you look at the gun, it stops moving, making you shoot behind ducks and geese even though you thought you were way ahead of them.
Kevin Dirk of Colorado’s Mountain Migrators (mountainmigrators.com) differentiates between duck and goose misses: “[Hunters] shoot behind ducks and point-shoot geese,” he says. Geese over decoys appear to be hanging almost motionless in the air. Hunters aim at them as if they were stationary targets; even with giant Canadas at close range you have to move the gun.

5 |What items do clients most often forget to bring to the blind?
Five of the 13 guides listed gloves as the most commonly forgotten item. “Many people are not used to shooting in gloves and forget to bring them in colder climates, or even practice with them beforehand,” says Tim Bouchard.

It’s difficult and frustrating to work safeties and load guns with numb fingers. Bring gloves you know you can shoot in, plus an extra dry pair.

Warm hands keep you hunting. In my opinion, chemical hand warmers in your pockets are the best 99-cent investment you can make in waterfowling success.

Two guides mentioned cameras as a “most forgotten” item. That’s a shame, because hit or miss, any day in the blind is worth remembering.