Seasons come, and seasons go—but come the first Saturday in September a timeless ritual is played out in cornfields and grainfields across the country. 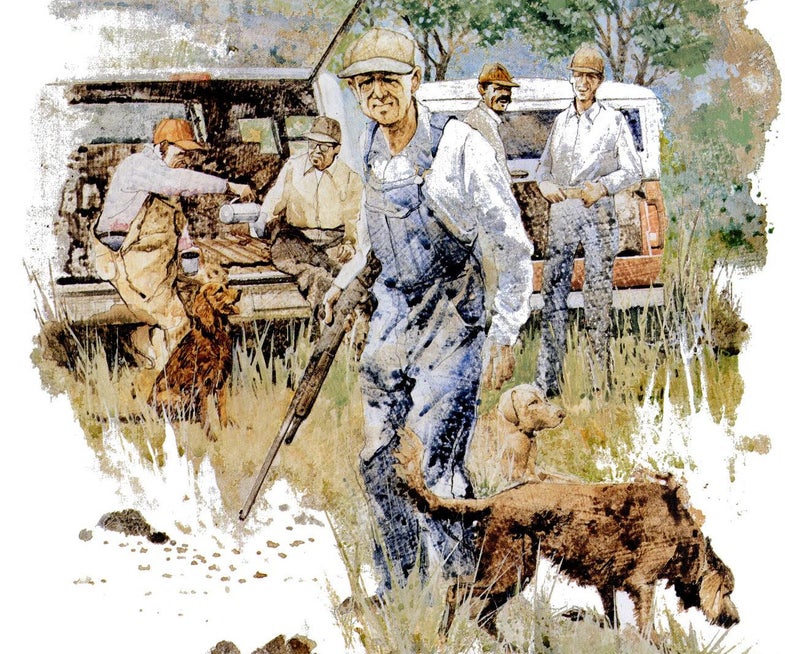 One by one, the vehicles pull up on the long grass under the shade trees by a clubhouse that no one has been inside of for years. Tailgates fall open. Boys, buckets, dogs, men, and shotgun cases spill out. It’s 91 degrees on the first Saturday in September and the stands of corn and sunflowers out in the fields look to be melting in the heat mirage. But the men are smiling. The hunting year has begun. We are 15 minutes into legal shooting on the opening day of dove season in the tidewater country of Virginia.

In this part of the world — just up the road from where a historic marker commemorates the harvest in 1611 of the first successful tobacco crop in North America — the dove opener is a sacred thing. Only birth, death, or serious illness could keep a man out of the corn today. And some guys won’t even stop for that. One fellow with a beeper next to the bird knife on his belt is shoving boxes of No. 8’s into a shooting bag and saying, “Dropped her at the hospital on the way here. She’s not due for a couple of days, but the other two kids were both early. I just hope the birds start flying before this damn thing goes off. You see me tearing out of here, you know I got the call.”

When a truck with a man who can barely see over the wheel pulls up, all conversation stops. “How you makin’ it, Abie?” each man calls to the wizened little fellow with the hearing aid as he walks slowly past.

Abe is 82 years old and has been hunting this farm since the days the tractors had long ears and four legs. He lost his wife last winter and it just about undid him. Abe just bobs his head once, gives a general wave, and walks over to shake hands with a man known as The Colonel, who is similarly aged. Abe hasn’t seen his friend since the funeral. His jaw works for a moment before the words come out.

“Brung my old Winchester Model 12,” Abe says at last, patting a gun whose barrel and stock have been together so long they’ve faded almost to a single nameless color. “Bought it 50 years ago for a hunnert-and-a-half. A world of money in those days.”

The Colonel puts a warm hand on Abe’s shoulder. “Well, I’m glad you the one bought it, Abie. ‘Cause I know damn well nobody ever killed any birds with it.”

Abe smiles. This is an encrypted message, the way two men who’ve known each other for 50 years exchange affection. The Colonel is saying, I’m glad you’re here; I’m sorry for your loss; I’ve been worried about you.

But the dove opener doesn’t just belong to the past. Charlie Parrish, all of 9 and grinning from ear to ear, is here with his father and grandfather, who take turns bragging on him. Charlie’s dad, Woody, tells how the boy killed his first deer two years ago his very first time out. They were walking along a creek when Charlie saw a doe sneaking behind them.

“I didn’t even see her,” says his dad. “And he threw up that little Green Wing Special 20-gauge and just folded her. I said, “Son, I hope you don’t think deer huntin’s gonna be this easy all the time.'”

Charlie just beams. His grandfather, not to be outdone, tells about how the teacher was grilling the class about various national holidays. “She asked if anybody knew what we celebrate on Labor Day,” says Harry Knight. “And ole Charlie liked to fall out of his seat waving his hand. “I know Labor Day! That’s when rockfish season starts!'” Harry laughs and ruffles the boy’s hair. Charlie is all of 65 pounds of pure boy. And he’s got the blood in him.

Finally, we caravan up and head out into the fields. Abe and The Colonel are dropped off in spots that befit their status. They’ve earned the right to locations that provide shade from the withering heat as well as prime opportunities to pick off birds that cross from the trees into the corn and sunflowers. Younger men are placed nearby to watch over them and retrieve their birds.

The rest of us spread out at least 50 yards apart in the sunflowers and sit on folding stools to wait. It doesn’t take long before I hear the distant pop of guns and calls of “Birrrrd!” that mean a dove is coming your way. Not yet accustomed to being shot at, most of the doves are coming so low you have to drop to one knee to get a safe upward angle or forgo the shot altogether. I shoot behind one that’s right overhead but changing direction with each snap of its wings. It flies past and is neatly dropped by the father-to-be.

“You shootin’ over your head today, son,” I hear Harry call to the man approvingly. “Got to,” replies the fellow. “That’s where the birds are at.”

Soon the birds are coming in from all directions, and I’m wired, scanning the sky as nervously as a fighter pilot in enemy territory. One of my foam ear plugs won’t stay put, so I tear a business card in half, suck on it until it’s pulpy, and jam it in my ear. It’s the best use I’ve ever gotten out of that particular piece of paper. In two hours, there are four doves and 31 shells at my feet. Suddenly, the father-to-be bolts wordlessly from his stand at a dead run.

“Well, I guess we know where he’s goin’,” someone calls. No birds fly for a while. The sunflower stalks clatter in the hot wind. The downturned faces of the flowers look like every girl who never got asked to dance.

At four o’clock, with just an hour of legal shooting left, I see Abe standing at the edge of the field and beckoning me with one hand raised over his head. I rush over, afraid the heat has gotten to him. It turns out he’s looking after me, instead of the other way around.

“You getting any birds over there?” he asks.

“Well, I got my limit. You come shoot in here for a while. They flying thick as thieves. Sit on my bucket. One a these boys gonna drive me back to the shade.”

With that he turns and moves away. In 45 minutes, I’ve downed six more birds and shot an entire box of shells. Mostly I’m shooting holes in the air. But a couple of times, my body takes over, bypassing my head. I see the bird, mount the gun, and roll a dove out of the sky in a single motion. It’s a sweet, addictive feeling, something that’ll keep you coming out even on days when you don’t see a single bird.

“I tell you what,” he says, lowering his voice and putting a hand on my shoulder. “Gettin’ old’s hell on a man. But the boys do put me in a nice stand when dove season rolls around.”

He turns and walks back to his truck, raising his hand silently to acknowledge the good-byes from the assembled. His tires hiss on the long grass as he pulls out.

This classic story comes from from the Sept. 1999 issue of Field & Stream