Having trouble shooting pheasants? You could be making one of these mistakes. Here's how to get back on track and shoot more birds 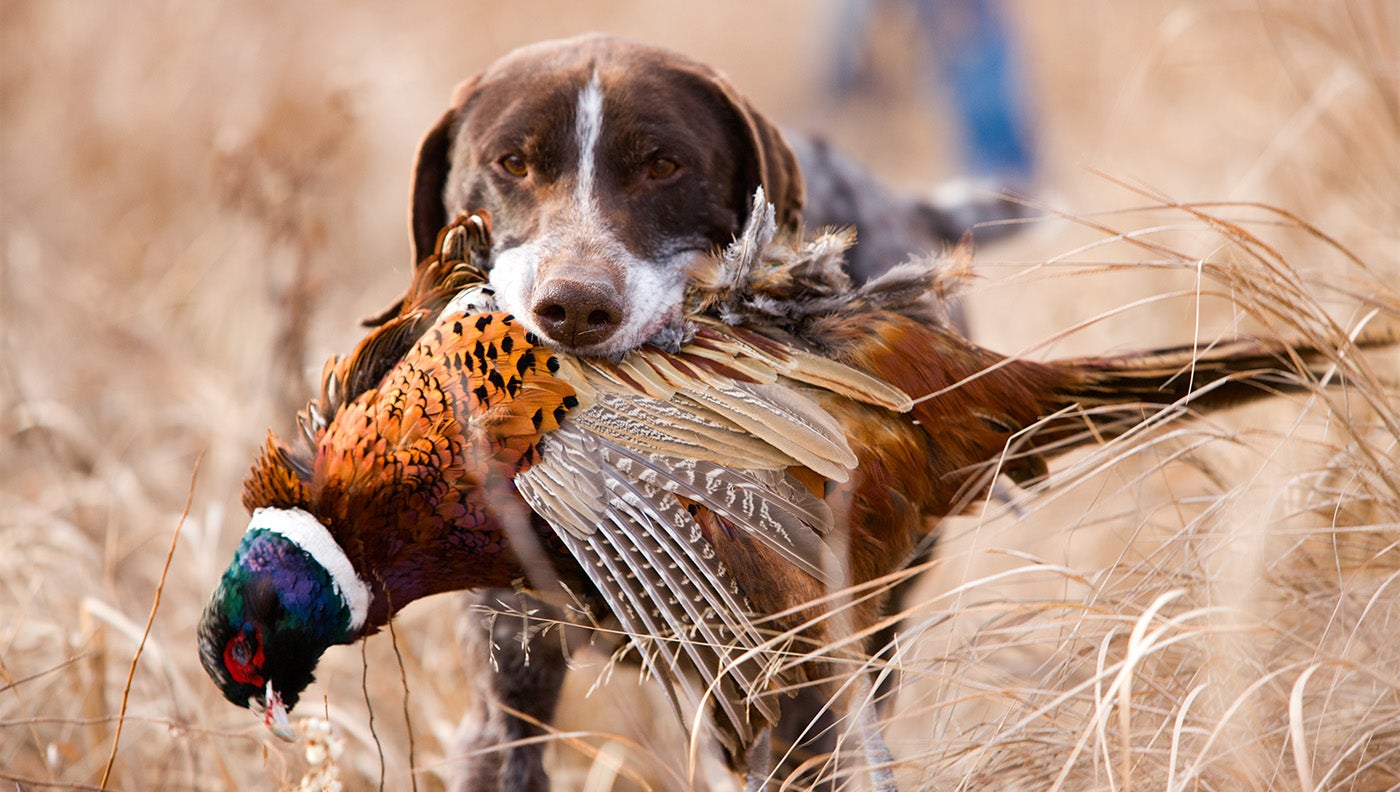 “We’ll flush about 150 birds today,” I told my new friend M.D. as we loaded our guns by his truck. A recent transplant to pheasant country at the time, M.D. raptly surveyed the wide fields, trying to picture 150 flying pheasants where he could see only a wide expanse of snow. “But only one of them will get up within gun range,” I predicted. “Don’t miss.”

The pheasants looked like tiny black checkmarks against the whiteness as they scooted in and out under the sparse cover of bushes and brushpiles. With the long grasses buried under the snow, the birds had nowhere to hide. They flushed in large, nervous flocks before we could close within 100 yards. Finally, we found the one bird we were looking for, holding tight in a lone patch of grass tufting up through the white crust.

M.D. missed, proving that when it comes to pheasants, knowledge is power only if you shoot straight.

Muffing deceptively difficult shots at close-flushing roosters is, perhaps, the most common error pheasant hunters make. But it’s not the only one. Here are ten lessons I’ve learned the hard way.

1. Don’t hunt pheasants in the wrong place at the wrong time.

Pheasants roost in thick, heavy grasses, walking or flying out to grainfields to feed in the morning. At midday, they hang around in light cover near food, then hit the fields again in the afternoon. Late in the day, birds will return to heavy roosting cover.

Many people believe pheasants linger on the roost on freezing cold winter days. Over the years, I wasted a lot of time getting up early on subzero mornings trying to kick-start sleepy pheasants out of their beds. In fact, when it’s 20 below zero and days are short, pheasants head for the fields at first light to load up on high-energy grain, so hunting their bedroom on a bitter cold morning is a waste of time. A nasty, windy, wet morning, is a different story: Hunt the roost early when it’s spitting and blowing, and you may well catch pheasants reluctant to leave their warm, weedy roosts.

By the same token, hunting good roosting cover at midday when the birds are still feeding yields poor results. Be there in the last 45 minutes of daylight, however, as pheasants return from the grainfields, and the hunting can be absolutely spectacular.

2. Don’t assume all public lands were “shot out” after opening day.

Early in the season, when hunter after hunter tramples public land, birds move out to nearby private acres where the pressure isn’t as intense. Gunwise birds sometimes use the public area as a bedroom, returning around dark to roost, then leaving at the crack of dawn.

Hunt a public area the day the corn is picked on the private land across the road and you’ll be amazed. Last fall I walked a small and heavily used county area on a whim, thinking I’d give the dog a good run if nothing else. I didn’t know at the time that the corn had been picked across the road the day before, and without a roof of cornstalks over their heads, the pheasants had retreated in confusion to the marsh grasses of the public land. What I thought was going to be a quiet dog walk turned into one of the noisiest hunts of the year.

Pheasants don’t follow those neat rules of behavior printed on ammo boxes: “early season/close flushes” or “late season/wild flushes.” I’ve seen opening weekends where the wind blew and birds turned skittish, offering no shots closer than 35 yards. And wild-flushing late-season pheasants usually jump up a good 100 yards out of gun range; the birds you actually get a shot at are the few that sit tight until you’re right on top of them.

4. Always block the exits where pheasants will escape.

This is one of the errors I commit regularly; I’m usually too eager to start chasing birds to wait while a blocker moves into position at the far end of a field. Every once in a while I hunt with someone who firmly believes in blocking, and I’m always impressed at how well it works. If you hunt any kind of strip cover-hunter-wise pheasants will run to the far end and flush. When pheasants know someone is watching the back door they don’t run or flush wild; they hunker down and take their chances with the hunters working the cover. One solo hunter I know actually walks noisily to one end of a field and pretends to stand there blocking, then sneaks around to the other side and hunts towards, well, himself.

A slammed car door or a slide-action smacking shut can put pheasants to flight before the hunt even begins. Sometimes you’ll be treated to the impressive sight of pheasant flocks taking off in sympathetic waves across a field, each mass flush triggering the next, all the birds leaving the field you’d intended to walk.

Always approach pheasant cover quietly, especially late in the season when cover is sparse and birds have grouped up. Once actually hunting, however, I’m not a stickler for silence. It’s my belief that pheasants can almost always hear you coming, no matter how quiet you try to be. They’re out there in the grass, monitoring your approach by the crunch of your footsteps, basing their decision to sit, run, or fly on the precise knowledge of where everyone in your party is at all times. Pause every once in a while; when ringnecks suddenly can’t hear you coming, they sometimes lose their nerve and flush.

Too many pheasant hunters bundle up in heavy clothes, then overheat after an hour of chasing the dogs chasing the birds. You want to feel a little chilly while you’re standing by the truck getting ready; you’ll warm up soon enough.

Pheasant hunting rarely requires heavy boots or brush pants. Better to don something lightweight and easy to move around in. Wear a number of lighter, thinner layers up top, rather than a heavy coat. You can add and subtract layers as you cool down and warm up, tucking unworn clothes into your gamebag. I choose a lightweight ballcap and keep a warm knit cap in my pocket should the weather turn colder.

Any color hunting clothes are fine, so long as they’re fluorescent orange. I glow like a Chernobyl pumpkin when pheasant hunting; I want the people I hunt with to do the same. Besides preventing accidents, this allows you to quickly verify everyone’s location when a bird’s on the wing and you want to be sure you’re taking a safe shot.

RELATED: The 10 Best Upland Shotguns Ever Made

If you travel to hunt pheasants, make your trip two or three weeks after opening day (unless of course you’ve already leased a section of South Dakota pheasant country or married into an Iowa farm family, in which case you don’t need my advice). Too many people think opening weekend, with its uneducated, unhunted birds of the year, is the best time to hunt pheasants. In fact, the weather can be hot, cutting your dog’s endurance and scenting ability. Many years, the fields aren’t harvested by opening day, either. Pheasants will hide among the standing crops where you can’t go after them. If you don’t have a place to hunt lined up long before opening day, you might not find one, and public lands will be very crowded.

Two or three weeks after the season begins the crops will be in, the weather will be cooler, and the crowds, gone. There will be lots of birds left, too.

8. Don’t ignore the woods for pheasants.

We all know pheasants are birds of grasslands and marshes, not timber. Watch a rooster batter upwards through the branches on stubby wings, his long, graceful tail totally useless as a rudder in close quarters, and you’ll see why ringnecks usually avoid the woods.

Nonetheless, pheasants will hide in the woods if they can’t go anywhere else. When heavy snow flattens the grassy fields pheasants prefer, look for birds in the woodlots. The best pheasant woods have creek bottoms, bushes, or brush piles to hide in. Years ago, I read somewhere that when you find pheasants in the woods, they will usually be roosters. I’ve paid attention ever since and found it to be true, although I have no idea why.

9. Don’t shoot at pheasants too soon.

Most pheasants are shot within 15 to 20 yards of the muzzle, and many more are missed at even closer range. Stifle the urge to shoot immediately. At 10 yards, your pattern is the size of a fist, and you don’t really know where the bird is going yet. Three feet of squawking, psychedelic gamebird blowing up at your feet is always startling; if you’re not paying attention, it’s downright scary. If you jump back and shoot in self-defense whenever a pheasant flushes, you’re going to miss a lot. Take a second to read the pheasant’s angle, swing the gun at the white neck ring, and shoot. Trapshooting, with its varying, going-away angles, is wonderful training for pheasant-type shooting.

While you’re at it, give up trying to beat your buddies to the shot. Take turns; everyone will shoot better, you’ll lose fewer birds, and those you bag won’t be mangled.

The real trick to successful pheasant hunting lies not in bagging more birds, but in deriving more satisfaction from the ones you do shoot. Even those of us who live in the best pheasant country don’t get ’em every day, which is exactly as it should be. When my own focus narrows to encompass nothing more than the tail end of a bird dog in the weeds, I try to stop at the top of a hill, take a breather, look around, and ponder how lucky we are—after having plowed up the prairies and run off so many native birds—to have pheasants around. Think about it that way, and every single bird becomes cause for celebration.