Fletcher Culpepper spotted his buck of a lifetime at about the worst possible moment–when he was halfway up the ladder... 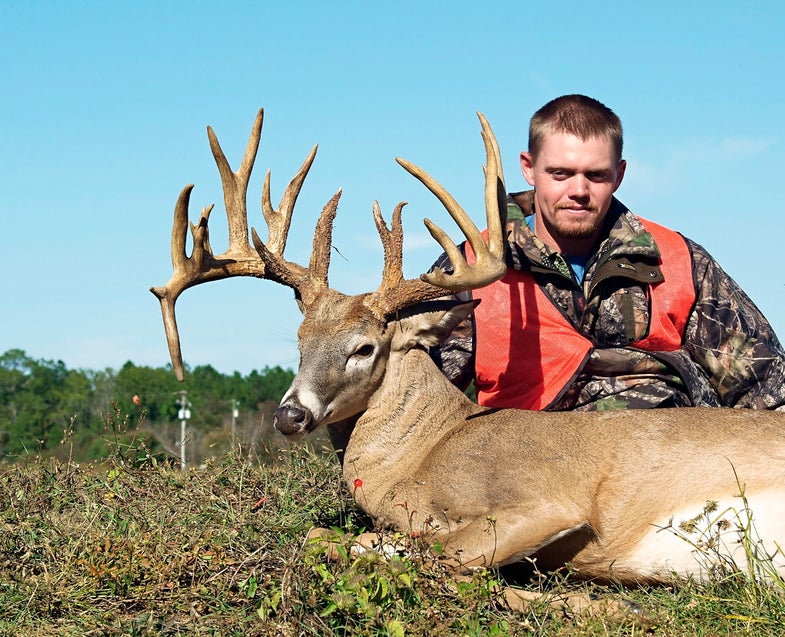 Fletcher Culpepper spotted his buck of a lifetime at about the worst possible moment–when he was halfway up the ladder to his treestand with this big 22-pointer staring straight at him. But Culpepper, 27, managed to keep his wits and put a tag on the 230-inch nontypical, which could be the third largest whitetail ever taken in Georgia.

Culpepper was hunting in Worth County near his Sylvester, Ga., home. He, his brother Trevor, his father Danny and a family friend all hung stands on the 55-acre tract, which they had never hunted before this season. They knew big deer were in the area, and one–a nice 11-pointer–had shown up on their trail cameras.

On Oct. 21, Fletcher had sat in his stand without seeing much. After the hunt, his brother asked if he’d heard a big buck fight.

“He said two bucks were fighting at dark, and it was pretty bad,” Culpepper says. “They were snorting, grunting, mowing down bushes for 15 minutes. They were fighting near my dad’s stand, which is about 400 yards from Trevor’s.”

The brothers decided that the next morning Fletcher would hunt Trevor’s stand while their friend, Zane, would hunt their father’s stand. After Fletcher settled in for his morning sit, he got a text message from Zane saying he’d been called into work and couldn’t hunt. “I’d have rather been over in my dad’s stand, but it was already daylight now,” Culpepper says. “I told myself I’d stay put until 9:00, then move.”

Culpepper, an experienced hunter who has tagged nice bucks before, says he had some reservations about the stand, a small lean-to ladder rig that would put him only about 14 feet off the ground. “It was the only stand on the property that didn’t have camo on it, and Dad put it on a bare pine tree at the edge of a open field,” Culpepper says, chuckling at the ribbing he gave his father over his lack of stealth.

But the report of two bucks engaged in a battle royale just hours earlier seemed too good to pass up. So at 9 a.m., Culpepper left his brother’s stand and, after briefly considering a shortcut through the woods, took the long way around via a road to approach his father’s stand quietly.

Twenty yards from the ladder he spotted a deer crossing a mowed path that led from the stand to a food plot. “I just saw the backside and rib cage of a deer walk past. I couldn’t tell if it was a doe or a buck, but I knew there was a deer in the food plot.”

Culpepper snuck carefully to the stand and started climbing. “I got halfway up and looked over my shoulder to where I’d seen the deer, and there was a doe and yearling staring right at me. I knew they had me; I was got. I froze right there, didn’t try to go up, didn’t try to go down.”

The two whitetails were about 70 yards from him on a mowed trail that led downhill 150 yards to a food plot. As the stare-down continued, Culpepper watched a huge buck stroll out 20 yards behind the pair. “As soon as I saw him, I knew he was a shooter,” he says. “I started shaking, hyperventilating. I’m halfway up the ladder, not even in the stand yet, and the biggest buck I’ve ever seen is staring right at me.”

Culpepper estimates he was clinging to the ladder for nearly three minutes, trying not to move and hoping the shaking wouldn’t give him away. Finally the big buck started feeding. A minute later, the doe and yearling finally took their eyes off Culpepper and started walking toward the buck. As they passed, the buck turned to follow: With all three deer facing away from him, Culpepper seized the opportunity to scramble into the stand.

“I climbed up and sat down as fast as I could, but by the time I got the gun up the deer were gone,” he says.

Culpepper ran through his options: He had a grunt call strapped to his wrist and a rattling bag in his pocket. He finally decided to hit the call, and when he did the yearling reappeared briefly, crossing the mowed path. The doe wasn’t far behind. Then, as he watched through the scope of his 30.06, the buck reappeared on the path, exposing just his head and neck.

“I had the scope on him for two or three minutes, but he wouldn’t step out,” Culpepper says. “When he finally did, I don’t even remember if I stopped him. As soon as I got the crosshairs behind his shoulder I pulled the trigger. He dropped right there.”

Having never seen anything larger than a 180-inch deer up close, Culpepper found it hard to fully understand the buck’s size. It was his father who helped him appreciate what he’d accomplished. Danny Culpepper kept telling his son that he had a potential state record, that he needed to call a game warden to come witness the kill. Fletcher finally relented and called.

“It would have been hard to make me feel any better, but the warden told me, ‘Man, I’ve been doing this 18 years and I’ve never seen anything like that.'” Fletcher says. “He even got his picture taken with the deer and called a warden in from a different county because he wanted him to see it.”

Georgia’s state record nontypical whitetail is a 248 4/8-inch buck taken in 1998. A 240 3/8-inch deer ranks second and a 231 2/8 is third. Bill Cooper, an official Boone & Crockett scorer and wildlife biologist who is retired from the Georgia Department of Natural Resources, green-scored Culpepper’s 22-pointer at 246 before deductions, 233 2/8 net. Cooper is confident that unofficial score will hold up enough through the 60-day drying period for the buck to take its place as the third largest whitetail ever killed in Georgia.

“The first thing everybody notices is the mass,” Culpepper says of the rack. “It looks like he has a pair of Louisville Sluggers growing out of his head.” But another distinguishing characteristic is the extremely symmetrical nature of the rack, which has only 31 inches of abnormal points.

Making the hunt even more special was the date of the kill. Fletcher Culpepper was named for his grandfather, who died in 1980, before Fletcher was born. Oct. 22 would have been the elder Fletcher’s 94th birthday.

“Everybody says Papa sent me that deer on his birthday as a gift,” Culpepper says. “For sure we had no idea that anything like this even existed in Worth County. It was a pretty cool deal.”