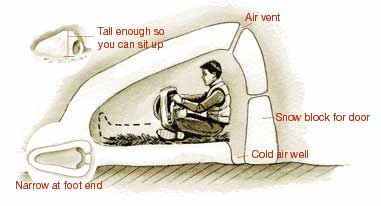 #2) Quintze Hut
Properly constructed, this poor man's igloo can be body-heated to above freezing on a 20-below day, higher if you light a candle. Step One Build up snow to a depth of at least 8 inches and pack it down to make a floor.
Step Two Heap loose snow onto the floor. Piling the snow over a backpack or mound of branches will let you create a hollow, which hastens the excavation process, but it isn't necessary. Let the snow consolidate for an hour or more, until it is set up hard enough to form snowballs.
Step Three Tunnel through the mound at opposite ends to dig out the center efficiently, fill in the unused entrance, and crawl inside to shape the interior. Ideally, the quintze should be narrow at the foot end, with a bed long enough to lie down on, and just tall enough at the head end for you to sit up. The walls and roof need to be at least a foot thick (check this with a stick).
Step Four Poke out an air vent overhead and dig a well at the entrance for the cold air to settle into. Cut a snow block for a door. Glaze interior walls with a candle to prevent dripping. Steve Sanford
SHARE

Anglers looking for an above-average population of 18- to 20-inch hybrid walleyes need look no further than Fort Wayne, where the St. Mary’s and St. Joseph rivers form the Maumee River. The hottest spot for big marble-eyes is below Hosey Dam on the Maumee River. Indiana Department of Natural Resources biologists conducting electrofishing surveys on freshwater lakes consider a catch rate of seven fish per hour successful. “When we go to Hosey Dam, it’s almost one per minute,” says biologist Jed Pearson. “It’s nothing to come away with 20 to 30 walleyes in a short amount of time.” Pearson suspects that the walleye concentration is a remnant population that moved downstream via the St. Mary’s River to the Maumee after escaping from a hatchery in Ohio. Access to the Hosey Dam area is limited to the steep riverbanks near the Anthony Boulevard bridge or by boating upstream from the closest public ramp five miles down River Road. Contact: Indiana Department of Natural Resources (219-691-3181).