During a 2008 fall hunt, Hal Lyon and his son Greg were charged by a 1,200-pound moose in Newfoundland. 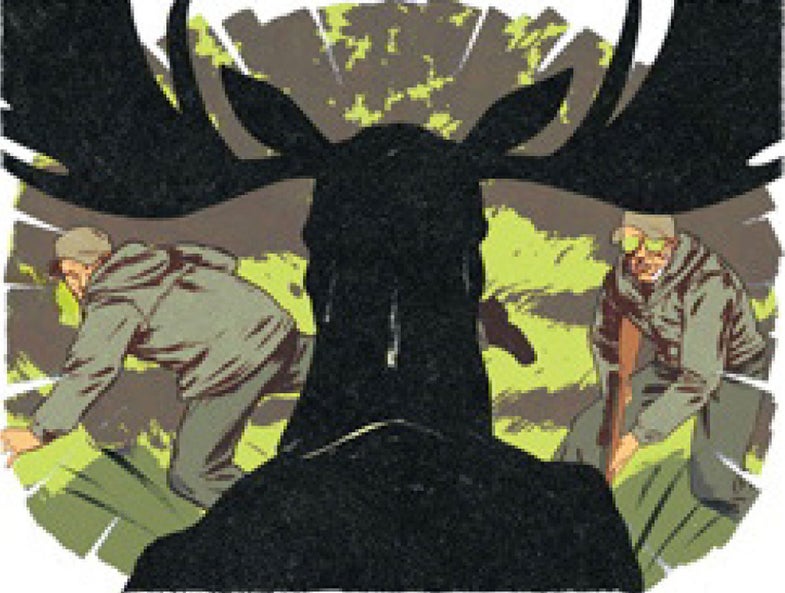 Greg and I took a guided hunting trip to Newfoundland to celebrate his safe return from his third tour in Iraq and Afghanistan. We’d been hunting all day and probably covered 10 miles on foot when Greg killed his caribou. After we covered the caribou with some branches to hide it from eagles, we began the long trek to the truck.

Halfway back I spotted a nice bull moose about 200 yards away on the other side of a lake. I took a shot, and he went down-and stayed down. But when we were within 100 yards, he got up and started trotting away. I fired again, and he collapsed. Before the guide and I ventured any closer, I loaded my last round. When we were 10 yards from the bull, he suddenly stood up and charged. ‘Shoot him now!’ the guide yelled.

He was coming right at me-red eyes and all-like a four-hoofed locomotive. I dropped to one knee and fired my last shot in his neck. Just as he was about to trample me, I dove to my left. The earth shook as he thundered by. Greg, who was behind me, barely missed getting gored by jumping into a brushpile at the last second. The moose kept going, running into the lake, where he eventually died.

When we were sure the moose was dead, Greg took off his hunting gear and swam to the bull, which was buoyed by the water. It took him 25 minutes to pull the moose 300 yards back to shore. Greg was shivering when he got out of the water, but after he got into some dry clothes he was fine.

The next morning I told Greg that I’d mount the moose antlers. Greg had a better idea: ‘Dad, we’re going to mount this entire head! This is the moose we’ll talk about for generations-the one that charged and almost killed us.’ —As told to Colin Kearns