In May 2009, a 355-pound swordfish slashed John Barfield, 23, after it jumped into his charter boat. Barfield tells the story: 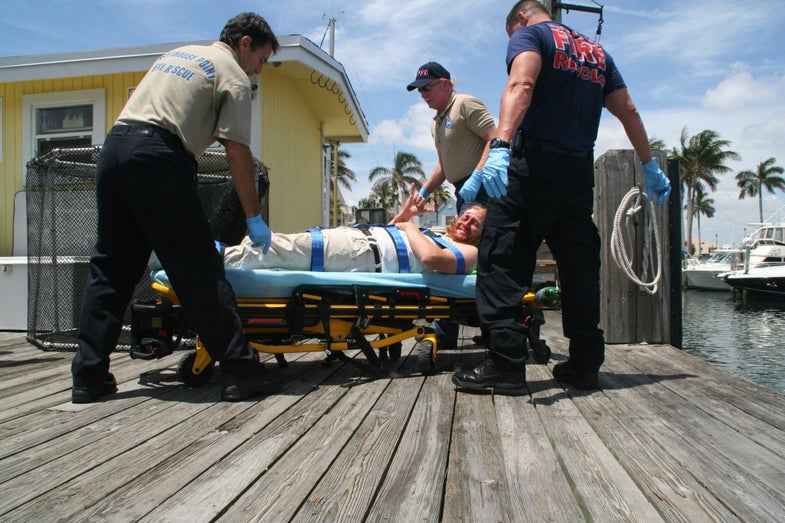 Four of us–R.J. Boyle, my buddies Sean and Rick from the Keys, and me–were daytime swordfishing off Lighthouse Point, Fla., and hooked up with a nice fish. After almost two hours, we finally got her to the side of the boat. R.J. and I had control of her bill, and we had gaffs and a harpoon in her. She was ours. Then, just as we were about to lift her in, she jumped.

The angle of the jump actually lifted us all in the air and carried us across the cockpit. She swung her bill, striking me in the forehead and on my left shoulder, before all four of us collapsed into one big pile on the deck–with the fish on top. There was a brief moment of pause, with everybody under the fish, before she went nuts.

She thrashed her head back and forth. During the mayhem, one of the two 11/0 hooks in the rig that we’d caught her on became lodged above my right knee. It was a disgusting sort of pain, because I could feel the hook sinking deeper into my leg. Sean scrambled out of the mess and cut the line between the hooks to free me. Then he quickly stabbed the fish in the brain with his knife.

My head was bleeding like a stuck pig. The guys cleaned it with iodine and put ice on my leg and collarbone, which was broken. As we headed back to the marina, I didn’t panic. I had the guys turn up the radio and was cracking jokes. I tried not to wallow in self-pity.

I was like a celebrity at the hospital because no one had ever seen a hook that big stuck in someone. About a week later I was on the water for swords again. We went 1 for 6, landing a 160-pounder. I’ve been eating on the psycho fish for a while now, too. I’ll be honest: The steaks taste better than normal.