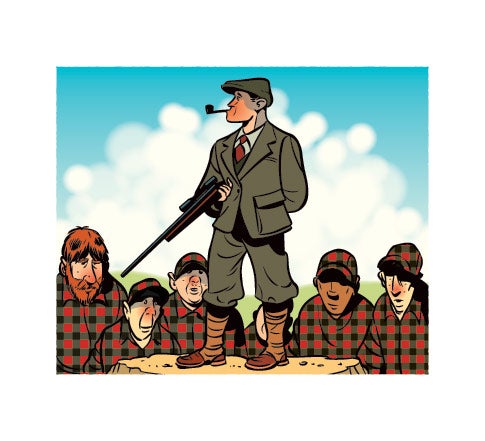 A: Never. Neither. It marks you as one of the common folk. When I can get it, I favor loden, which is worn by people of taste and discernment such as myself.

Q: Between you and your great colleague, Phil Bourjaily, who is more skilled at the other’s shooting discipline? —Jacob Honeycutt, Orem, Utah

A: I have absolutely no idea. I’ve never seen Phil shoot a rifle, and he’s never seen me shoot a shotgun. However, I am better looking, speak six languages, and play eight musical instruments.

Q: Wise and Enlightened Dave: I would like to have a backup handgun for dangerous game. What cali­ber do you recommend? —Henry Aldaz, Denver, Colo.

A: I’m not a believer in backup handguns for dangerous game. They’re not nearly as powerful as a big rifle, and unless you piss ice water in times of mortal danger, they’re too hard to hit with. I know of an Alaska guide who tried to stop a grizzly with a .44 magnum, and he believes he and his client would have been killed if the client hadn’t had a .338 Win. Mag. and known how to use it.

A: If you stick to tough, ­controlled-​­expanding bullets, it should be O.K. I’ve shot a number of coyotes with these slugs, and they didn’t do a lot of damage to the hides.

Q: For hunting the timber in Vermont, do I really need a magnified ­optic?—Andy Gagner, Starksboro, VT.

A: I have hunted in Vermont and can attest that there are lots of places where you can get by just fine without Xs. If you’re not a fan of magnification, I’d get a red dot. There’s nothing iron sights do that optics won’t do better.

Q: Do you ever go fishing? What’s your most memorable catch? —Derrick Haan, Carlisle, PA.

A: Over the years I have done a great deal of fishing, but I never got good at it. My most memorable fish was a giant ulua (trevally) that I hooked at Midway Atoll. They get as big as 170 pounds, and this thing was like a nuclear submarine. I fought him forever and finally got him alongside the boat, where he broke off.

Q: I have a desire to go elk hunting that strongly coincides with my desire to own a .338 Win. Mag. My buddies think it’s too much gun. What do you think? —Chris McKinny, via email

A: I think you need new buddies. The .338 is one of the best elk cartridges ever.