New regulations hope to conserve striped bass, but some anglers are raising alarm 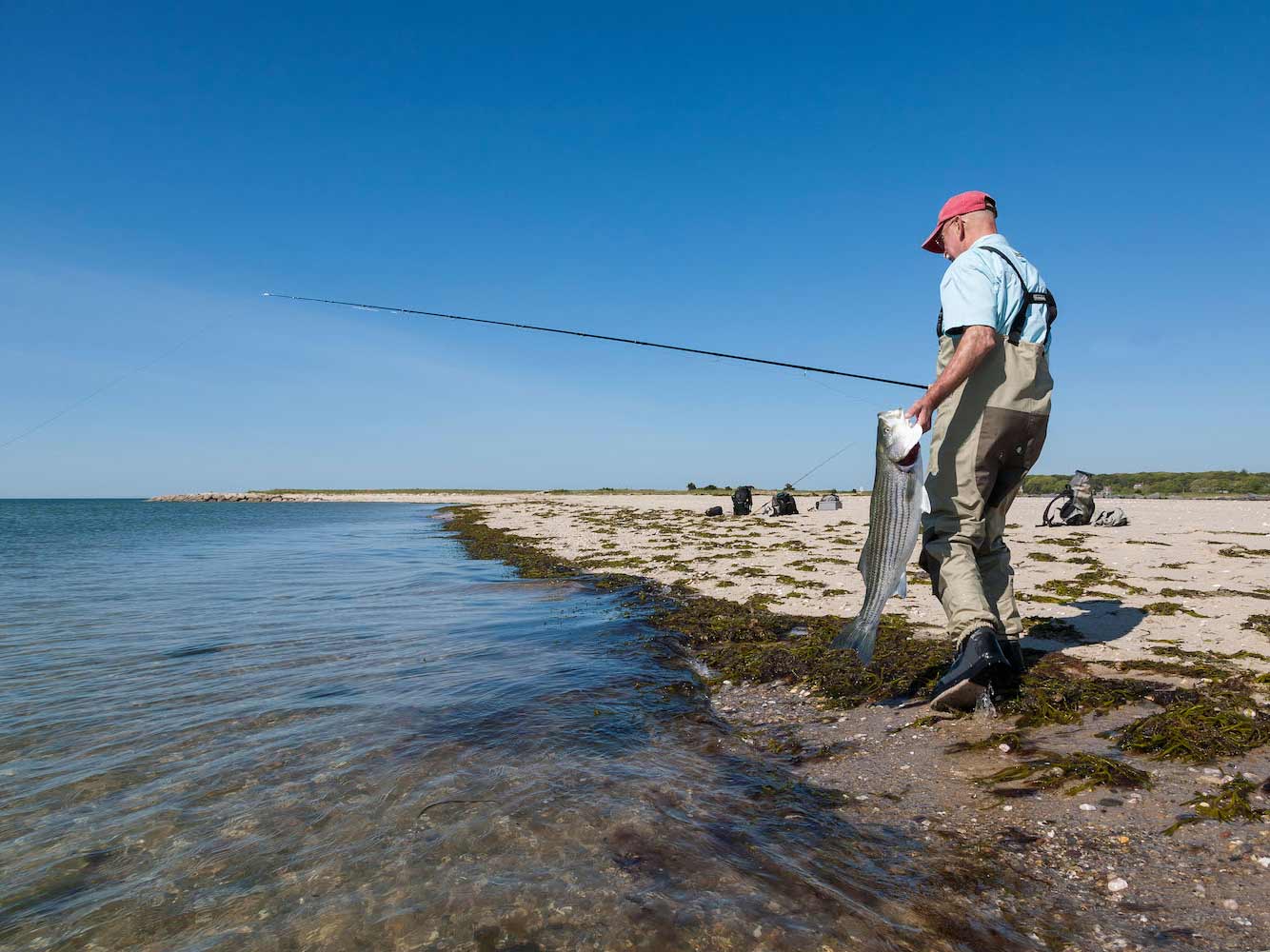 Next year, anglers fishing for striped bass will have to follow new regulations.

These regulations for the 2020 season were set at the 78th annual meeting of the Atlantic States Marine Fisheries Commission (ASMFC), with the approval of Addendum VI of the Interstate Fishery Management Plan for Atlantic Striped Bass.

Now anglers are limited to a one-fish bag limit and a 28- to 35-inch recreational slot limit, for ocean fisheries. Chesapeake Bay states must implement a 1 fish bag limit with a 18” minimum size limit. States have until May 2020 to decide on their own regulations through conservation equivalency, if they so choose.

Starting January 2021, all bait fishing for striped bass must be done using circle hooks. This requirement is mandatory, regardless of any conservation equivalency measures develop by individual states.

The goal is to reduce fish removals by 18 percent and help revive the striped bass stock in the Atlantic ocean. The board collected suggestions from the public during a comment period from August 19–October 7, and fishing groups like the American Saltwater Guides Association, and the Recreational Fishing Alliance spoke at the meeting.

Some anglers aren’t happy with the decision, saying the reductions won’t be met and the slot limit isn’t enough.

After the meeting, the American Saltwater Guides Association (ASGA) posted a message on their Facebook page. In it, they said, “There is no way the reductions will meet target at this point…We owe it to the resource to fight this as hard as we can.” The group pushed back against a slot limit for striped bass and suggested alternatives during the meeting.

“This is the worst of all slots,” says Peter Jenkins, Board Chair of ASGA and owner of the Saltwater Edge tackle shop. “Half of the fish at 28-inches only spawned once, and half of them haven’t spawned at all.”

The slot isn’t the group’s only issue with the Commission’s decision. “All we’re talking about is an 18 percent reduction in overfishing, but it doesn’t rebuild,” says Jenkins. “The issue is, they said we need 18 percent coast-wide, and then the first topic in their meeting is conservation equivalency.”

Essentially, conservation equivalency allows each Atlantic state to create their own regulations, as long as they meet the 18 percent benchmark set by the commission. ASGA says the reduction can’t be met, since the data was collected at a coast-wide level. ASGA believes that if each state can set its own regulations, the end goal of rebuilding the striped bass fishery can’t happen. That’s also why they fought against slot limits in the first place. “We refuse to support slot limits, because they don’t work unless everyone does it,” says Tony Friedrich, ASGA Vice President and Policy Director. “The only thing that makes sense is one fish at 35 inches.”

“We view conservation equivalency as the devil,” says Friedrich. “Conservation equivalency means each state can say, ‘Wait a minute, we don’t like the rule you just passed. We’re going to go back to our state, put together a plan that achieves an 18 percent reduction, but one that doesn’t follow your plan.’”

“We believe abundant supplies drive participation and participation drives sales,” says Jenkins. “No one buys a rod from me when they think there’s no fish out there. They’re not as abundant as they used to be.”

He thinks the latest decision by the ASMFC is a good next step in striped bass conservation. But is he happy? “You do this fisheries management stuff long enough, you try to detach yourself from emotion,” says Nowalsky. “You’ve got to respond to the scientific information that you have available to you, in conjunction with what you know is going on with the stock from anecdotal information on the water with your own experiences.”

Among those many groups, Nowalsky split the discussion into two main concerns over striped bass: people who want to harvest striped bass, and others who see a sport fishery and primarily catch and release.

The main concern he does have is the data with which these latest decisions have been made. “Specifically, that we were responding to a new stock assessment that used updated marine recreational catch information, but that information has not yet been used to update reference points,” says Nowalsky.

Striped bass are managed on reference points, and the commission “set the threshold in 1995, the year the striped bass were declared recovered,” says Friedrich. “The threshold is based on spawning stock and biomass, or fertile females.”

ASMFC meets in May 2020 to begin an amendment process that will consider a change in reference points for striped bass, and the ideal thresholds for the resource.

Do We Have the Data to Make Good Decisions?

If this sounds complicated, it’s because it is. Every angler on the East Coast has an opinion on striped bass and how they should be regulated. They all draw from personal anecdotes and time spent on the water, not catching fish. With each new conversation, one concern is raised again and again: Is the data good enough?

Nowalsky puts it in simple terms: “The biggest difficulty with fisheries management is that fish have tails. They move.”

Nowalsky says opinions are often based on fishing inputs only. That makes it difficult to know if the fish stocks are depleted, or if they’ve simply moved. “If you can’t catch fish somewhere is it truly because the stock is depleted, or is it a function of changing migration patterns?” he says. “Is it something like habitat that has been affected, so these fish no longer want to come to an area…or now these fish can’t find the forage they were used to so they seek other migratory patterns?”

Read Next: Despite Pockets of Abundance, Bass Numbers Are Down, 2012 Rules May Change

Peter Jenkins and the ASGA point to these fishing inputs as well, to prove that striped bass stocks are depleted up and down the coast. “The canary in the coal mine is the surfcaster, because they’re limited by access,” he says. “When they’re not catching fish, don’t find them, or don’t catch them…they’ve been in a tough spot for a couple of years now.”

“When a particular user group looks at something like area depletion, they say, ‘Well, I can’t catch fish,’” says Nowalsky. “The easy answer is often to point at something else and say, ‘They’ve removed fish from the ocean, I can’t catch them anymore.’”

Tina Berger, the ASMFC Outreach Director, says the data is strong. “Of all the fisheries we manage, striped bass is the most robust, scientifically sound data that we have,” she says. “In terms of catch information, it’s the most highly surveyed species on the coast, being one of the most important recreational species.”

The most recent data collected was the 2018 Benchmark Stock Assessment survey. “All our benchmarks go through external peer review by a panel of independent fisheries scientists,” says Berger. “Every single Benchmark Assessment, including the one in 2018 was approved for management use, by the panel and by the board.”

Some anglers have been foretelling the doom of the striped bass fishery for years. The ever-present fear is another fishery collapse, like the one that happened in the 1980s. Berger is here to reassure those anglers. “We’re nowhere close to where we were in the ‘80s when there was a stock collapse,” she says. “We’re still at a pretty high biomass, although it has been dropping. We have a good chance of bringing the stock back up to the levels of the biological reference points.”

The Next Steps in Striper Conservation

The latest ASMFC decision is the first step in setting the 2020 catch regulations for striped bass. Now each state can accept the one fish bag limit, 28- to 35-inches recreational slot limit or they can create their own rules through conservation equivalency. Again, the use of circle hooks while bait fishing is still mandatory. Those rules must be reviewed by the ASMFC commission, as well as go through a Technical Review, by May 2020.

Jenkins, and the ASGA, are planning to watch those proposals closely. “We want to make sure the conservation equivalency proposals are transparent,” he says. “Now, potentially, they’ve moved the conversations behind closed doors. This might have been their goal from the beginning. That’s the B.S. of this setup.”

Read Next: Striped Bass Are Gamefish

Friedrich added his own area of focus over the next few months. “In the upcoming amendment process, they’re going to try to lower that threshold number,” he says, referring to the striped bass reference points. “For the sake of argument, let’s say they said we need ten million spawning stock-sized females in the system. They’ll be like, ‘We have five million now, let’s reset the bar at five million.’”

Nowalsky will also be involved with the next steps, both at the individual state level, and on the next ASMFC Commission decisions. “I’m not sure if there is a way to make everybody happy,” he says. “If everyone’s complaining a little bit about the decision that you made then you probably struck a pretty good balance.”

At the May meeting, the Board will decide whether or not to initiate an Amendment, or the issues up for inclusion. The Board must, however, respond to rebuilding the spawning stock to the target level, which will happen in a subsequent document.

What would a successful set of regulations look like? It depends on who you ask.

“Striped bass is a very politically-charged stock,” says Nowalsky. “Almost all users groups want to see something different for it.”

Looking at the chart above, the one detailing fish mortality caused by both commercial fishing and recreational fishing, a trend that sticks out, at least to me, is the loss of fish from recreational releases. The ASMFC calculates this figure by assuming that 9% of fish released by recreational anglers die.

For the striped bass fishery to thrive, anglers need to be more careful when handling and releasing fish.

Berger said the new circle hook requirement when bait fishing should help. She said anglers should “stay informed, learn about how to handle fish, and how to use circle hooks, so they can increase the survivability of the species as they’re fishing for it.”

States along the East Coast are required to submit their implementation plans by November 30, 2019, so they may be reviewed and approved by the board in February 2020.

In the press release, ASMFC said Addendum VI will be available on their website sometime in early November.