When it comes to catching a meal, crappies are the beginning and the end of it. No other panfish so... 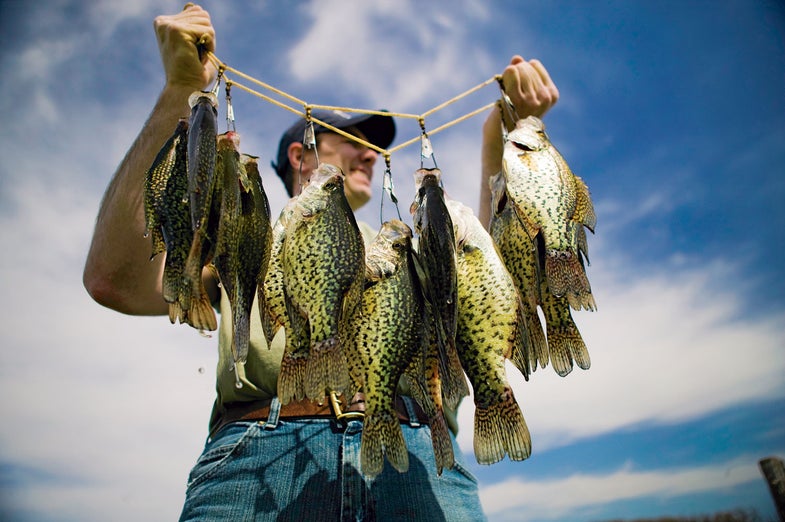 When it comes to catching a meal, crappies are the beginning and the end of it. No other panfish so deliciously transforms from fish to fillet (although some fishermen, including me, might argue for the virtues of a platter of perch). In the Midwest and South, where crappies are most abundant, it’s a toss-up as to whether catching a stringer of crappies or having them for dinner is summer’s greater joy.

How to Hook Up

By the time water warms in July, crappies are done spawning and have typically abandoned the shallow and thick cover they used in spring. Finding summer crappie schools is the hard part. The usual answer, however, is fairly simple: Look to deep structure. Just how deep depends on the water clarity in your particular lake. In clear northern lakes, crappies may frequent rocky humps or points 20 feet down, or even deeper. In turbid water with less light penetration, they might be hanging only 6 to 12 feet below the surface.

No lure beats a jig in this situation. Use ultralight spinning tackle with 4-pound line. Soft-plastic or marabou crappie jigs in the 1⁄16- to 1⁄8-ounce range can be cast, slow-trolled, or jigged vertically to find fish. An electronic fishfinder (sonar) will save you untold hours of ­exploration, letting you locate and check under­water points, humps, and deep weed edges fairly quickly. Fishing is almost invariably at its best early and late in the day, when light-shy crappies are somewhat shallower and feeding more aggressively.

1. Sweeten the Jig: Bring some fathead minnows, 2 inches long or less, in a minnow bucket for tipping your jigs. This will often entice otherwise reluctant biters.

2. Troll a Crankbait: Medium-running crankbaits up to 3 inches long work great for open-water crappies that are suspended near structure. You won’t catch as many crappies this way, but those you do catch will be larger than average.

3. Drop a Marker: When you get a crappie bite, drop a weighted marker on the spot. Where there’s one fish, there are usually more.

4. Find Cover Combinations: A pairing of cover types often produces more fish. The weeded end of an otherwise bare rocky reef, for example, can be a hotspot.

5. Cut Right: Get a good electric fillet knife, which will make preparing a mess of crappies substantially easier. Doing more than a couple of fish with even the sharpest standard knife gets old in a hurry.

RELATED: Red, White, and Bluegill: Why Panfish Are Quintessentially American