The Beach Bum’s Guide to Surf Fishing for Sharks

Duunnn, Dunnn… Here are the tackle and tactics you need to go hunting for jaws 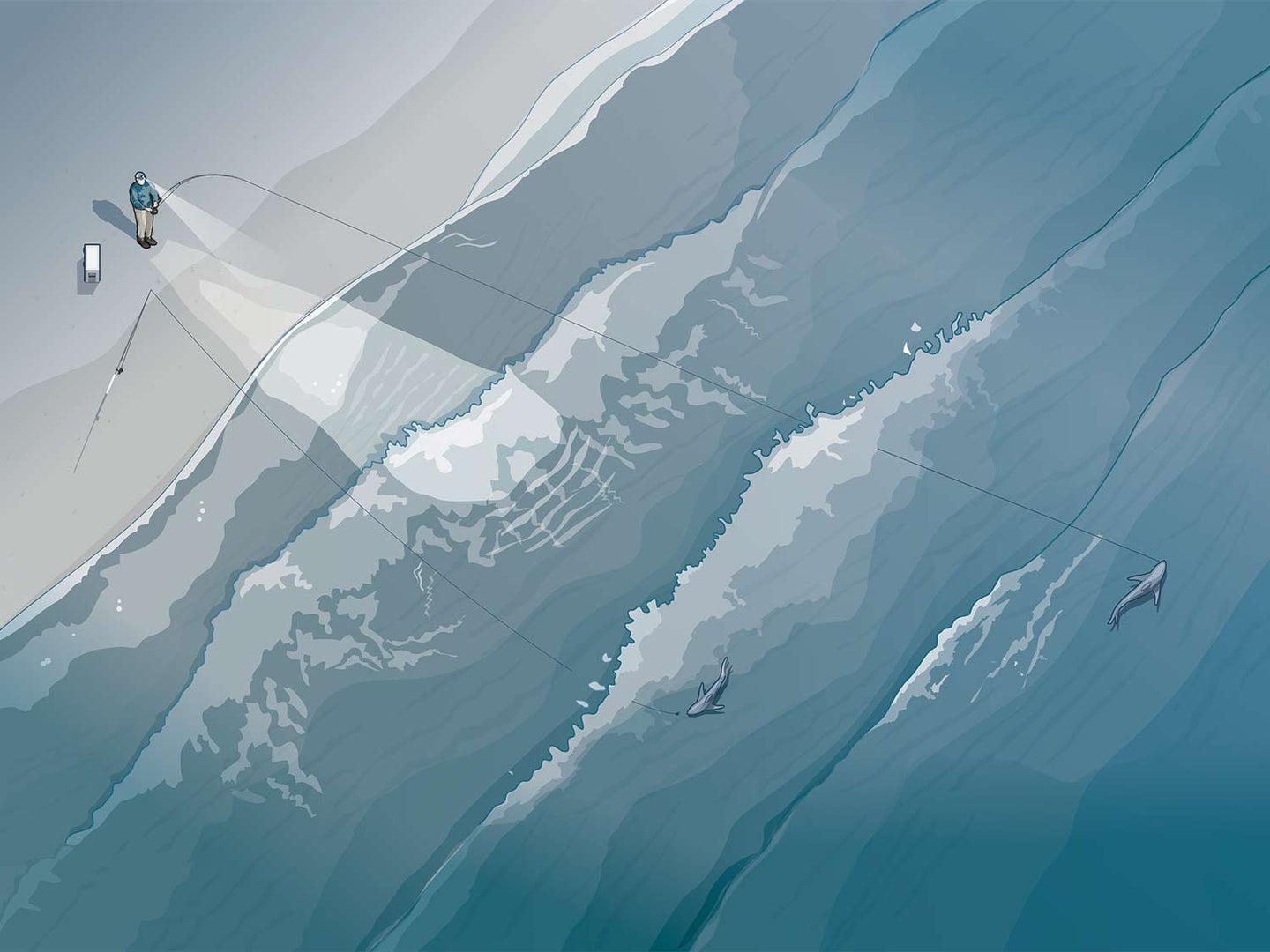 When nearshore water temperatures reach their summertime peaks, species such as striped bass, big bluefish, and red drum leave the surf until the fall. What many surf anglers don’t realize, however, is that the same sweltering temperatures that drive out the stripers and reds draw in brown sharks, blacktips, and spinners. From July 4th to Labor Day, these sharks swim within casting range of beaches from Massachusetts to North Carolina. If you’re willing to put in the time, these toothy surf prowlers can provide some of the most memorable battles of your life. Here’s how to play.

The surf sharks of the mid-Atlantic and Northeast average 3 to 6 feet long and top out at around 100 pounds, making them the perfect size for the same tackle used to throw bait at stripers or reds. A 10- to 12-foot rod rated to throw up to 8 ounces will tame most of the sharks you’ll encounter—but there is a chance that you’ll hook something big enough to spool your reel. Reels with a bait-feeder feature allow the sharks to swim off with the bait without feeling any resistance and also provide insurance against having your sand spike uprooted and your entire combo dragged into the surf.

To prevent bite-offs, use a leader of single-strand wire, such as Malin Hard-Wire No. 8 or 9. But make sure the leader is no more than 10 inches long, otherwise the weight and bait will helicopter on the cast, which will kill your distance. To prevent line abrasion against the shark’s ­sandpaper-​rough skin, use an 8- to 10-foot length of 80- to 100-pound-test monofilament shock leader between the wire and your main line. If that main line is braid, an FG knot is a great choice for creating a low-profile connection that will slip through the rod guides easily.

Frozen bait produces weaker scent and falls off the hook faster than fresh bait, so before a shark outing, hit the beach with your light-tackle outfit to catch croakers, spot, and small bluefish. Sharks hunt these fish, and a fresh-cut chunk from any one of them won’t go untouched for long.

Several of the shark species commonly encountered in the summer surf are protected. Check state and federal regs first. If you hook into a protected species, it must be quickly released unharmed. To improve a shark’s chance of survival, use circle hooks. When you’re landing a shark, pull it just beyond the reach of the breakers. Leaving the shark in the wash will make the release easier on you and the fish, and a properly seated circle hook should be easy to remove with long-nose pliers. In the event of a deeper hooking, use wire cutters. Snip the leader close to the hook and send the shark on its way.

The best time to catch a surf-cruising shark is from late afternoon through the first few hours of darkness. The fading light brings the fish in shallow to feed, and the late-afternoon hours tend to see a spike in the numbers of kingfish, croakers, and snapper bluefish in the waves. It’s important to remember that sharks can come in close—very close—to the beach, so you don’t need to bomb a cast 10 miles to reach the zone. Instead, target areas with deeper troughs running close to the surf line, and don’t be afraid to throw short, just past the first break.