The Beginner’s Guide to 3-Gun Competition

If you want some fast-paced fun, try one of the country’s fastest-growing shooting sports 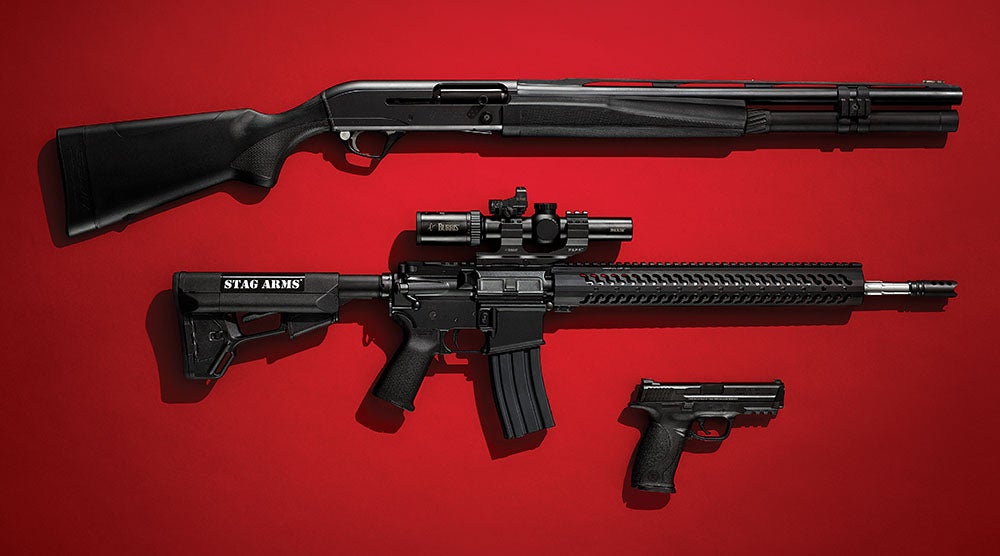 There’s Wednesday night bowling league, and the Father’s Day tourney at the municipal golf club. And then there’s the opportunity to become the best all-around shooter you’ve ever been—all while staying sharp for fall and having a ton of loud, fast-paced fun with your fellow shooters (not to mention preparing for the end of days, just in case). If you’re looking for some excitement, step up to the line: Ready. Set. Start shooting 3-gun.

At the horn, you’ll scramble through a timed course that looks like a construction site from the Walking Dead, blasting targets along the way. If that weren’t reason enough to do it, with time you’ll learn to shoot your shotgun, rifle, and handgun faster than you thought possible, and the tension of competition will make you a better shot under pressure, when it counts. Here’s the lowdown. 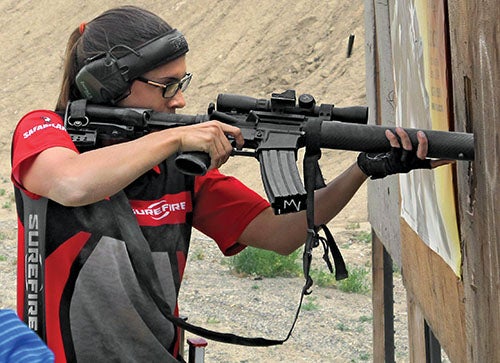 Getting started in 3-gun can seem intimidating because most of us didn’t grow up running around with an AR-15 in our clutches. It’s alien and fast-moving, and at first all the other participants will be much better at it than you. But if you toss your ego aside and jump in the arena, you’ll find that it’s a very supportive community and that getting involved is very easy.

First, search around online to find a 3-gun match in your area that is open to the public and at least a few weeks away. A great place to start is -3gunnation.com. An emerging body that currently sanctions matches in more than 100 townships across America, 3-Gun Nation works to standardize the rules of 3-gun and to create a network of local tournaments whose winners can move on to bigger events. (The year’s top point accumulators compete in a final national event where a champion is crowned.)

Next you need to choose a classification (see below) and get outfitted. Depending on the class you select, it might be possible to use guns you already own. You’ll need ammo, and lots of it. Each 3-gun match listing will give a minimum requirement. Double it. Quantity is more important than quality, so buy inexpensive ammo in bulk.

A match is no place to learn basic gun–handling skills and safety—or to get familiar with new equipment. So hit the range in the weeks preceding your match to practice. Focus on drawing and shooting while on the move and from various positions—and constantly remind yourself to be safe.

When you arrive at the match location, check in at the registration table, get your assigned flight and start time, walk the course to get oriented, and then do more listening than talking. Experienced shooters are generous with advice to novices interested in improving. While there are sponsored 3-gun pros at some shoots, rest assured that the vast majority of competitors are hobbyists, just like you.

Your goal should be to compete, be safe, and have fun. Speed will come with experience. Three-gun regulars have seen it all in terms of competitors’ skill levels; the only way to embarrass yourself is to be a sore loser or an unsafe shooter. 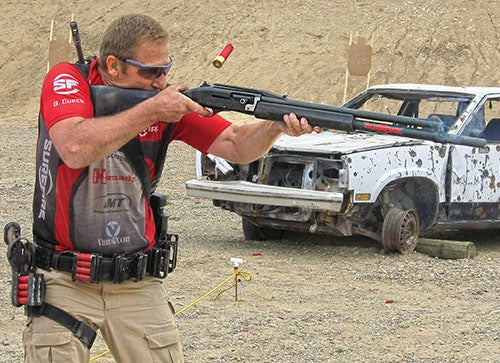 Every 3-gun match falls into one of three classes, based on the type of equipment allowed. You need to choose a class before signing up, so here’s a breakdown: 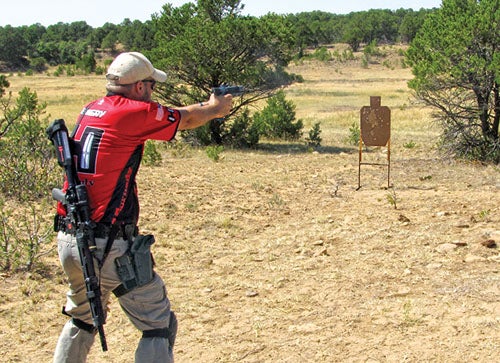 Three-gun is a test of skill, an obstacle course, and a race. A typical match includes eight to 12 individual stages, each presenting five to 35 targets that must be hit in the shortest amount of time possible. Targets range from paper silhouettes at fist-fighting range to steel poppers at 600 yards; there may be flying clay pigeons, swinging bowling pins, spinning wheels, or any combination thereof.

To make things more interesting, courses typically feature walls, windows, barrels, and even junk cars for you to navigate around. The number and type of these obstacles are limited only by acreage and the match designer’s imagination. Some stages require transitioning between pistol, rifle, and shotgun, and it’s on you to plan the best attack. Time penalties are levied for missed targets; safety violations get you disqualified. The shooter with the shortest combined time for all stages wins.

Like golf, weekend matches are held at facilities across the country, and several annual marquee tournaments attract corporate sponsors, big purses, and top competitors. But that’s where the similarities to golf end. No two 3-gun courses are exactly alike, and some are known for various themes, like Crimson Trace’s Midnight Invitational, which is held at night; or the MGM Iron Man, which is notorious for grueling runs between shooting stages. But you can make 3-gun as hardcore or as relaxed and fun as you want. No matter what, it is a great way to add some excitement to your summer—and to your shooting.

Get the Gear: Rifle

This .223-caliber AR has an extendable buttstock with a comfortable cheekpiece and midlength forearm for solid control. The muzzle brake and match trigger aid in all-day accurate shooting. When not neutralizing targets, the 3G makes a nice varmint rig.

Get the Gear: Shotgun 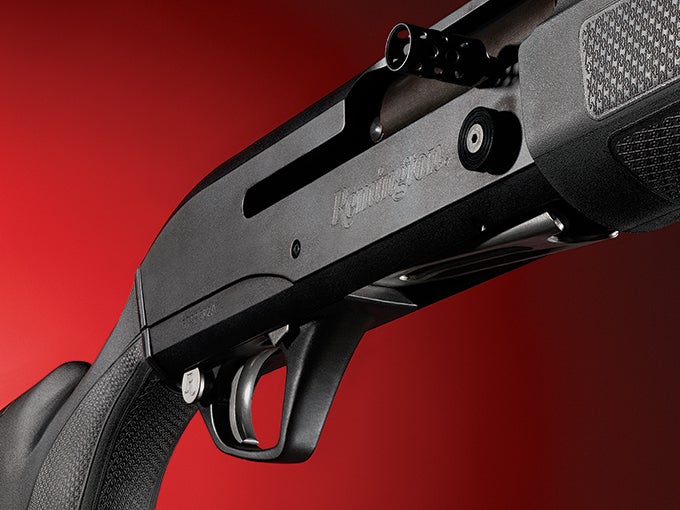 Get the Gear: Shotgun

Fast, reliable, and soft-kicking, this 3-gun-ready 12-gauge semiauto holds eight shells in its extended magazine. It feels much like your old 1100. You can justify its price tag by also using it for hunting and home defense.

Get the Gear: Pistol

The affordable M&P 9 offers a great balance of accuracy, reliability, and mild recoil, thanks to its low-profile receiver and grip, which align the bore with your extended arm. It’s also ideal for home defense and concealed carry.

A typical 3-gun stage may require 20 or more shotgun shells, a spare 30-round AR-15 mag, and a couple of handgun magazines. That’s roughly 10 pounds of stuff, so don’t plan on carrying it all on a dress belt or in your pockets.

What You Really Need

Visualize the Stage
Prior to each stage, you are allowed a walk-through. Pay attention, then mentally run through the stage while waiting to shoot. Visualize smooth transitions between guns, how you’ll tackle tricky obstacles, and the best order in which to take out targets.

Remember, Smooth Is Fast
When you consciously try to go faster, you often go slower. The real way to slash your time is to think smooth. Slow down, aim, squeeze the trigger, and follow through. Do that, and you will get faster with practice.

Take a Rest
The upside to all those obstacles is that they usually make good gun rests. For waist-high barriers, drop your left knee to the ground (if you’re a right-handed shooter) and use your left hand to support the fore-end against the object. Then rest the elbow of your trigger hand on your rear knee for added stability.

Learn to Load
Unlike rifles and handguns, shotguns do not accept preloaded magazines. Winners are often decided by who can reload their scattergun the fastest. One cutting-edge method is to stage shells in rows of two, end-to-end in a special belt holder. When it’s time to reload, you flip the shotgun over, exposing the loading gate. Then grab a row of shells, thumb on the last shell’s rim, and shove them into the magazine two at a time. Pros can load eight shells in under four seconds.

Focus Front
Your eye can focus on just one plane at a time. With a shotgun, as any hunter knows, it’s best to focus on the target. But with a pistol, you’ll likely do better if you focus on the front sight. The rear sight and target will still be visible—just slightly blurry. The key is to get a good sight picture with that front sight, then concentrate on a smooth trigger pull that doesn’t jerk the gun.

For more, check out Range365: Shooting Off at the Mouth: Chad Adams

Dave often cautions us not leave our variable scopes set on the highest magnification when we’re hunting. That way, if we have an unexpected close call with a buck as we sneak through the woods, we’ll have a better target than a patch of blurry hair, which is all you see when you look at a deer 10 yards away through a 9x scope.

Here’s another idea: the hot rifle sight setup among competitors in 3-Gun ( tactical pistol, shotgun and rifle shooting) matches right now is a conventional scope with a small backup red dot set on an angled mount. You’ve got your scope for longer range work but if you suddenly have to shoot a target at 10 feet, you keep your head still, both eyes open and on the target, and you roll the rifle slightly to bring the red dot into view. It is a very fast and effective method and way better than bobbing your head up and down with those see-through scope mounts that let look under your scope to use iron sights.

I am tempted to try the two sight arrangement on a slug gun this way for fall, just to do it. Anybody else think the 3-Gun two-sight solution might cross over to hunting?