The 24 Best Books on the Military, Guns, and Hunting 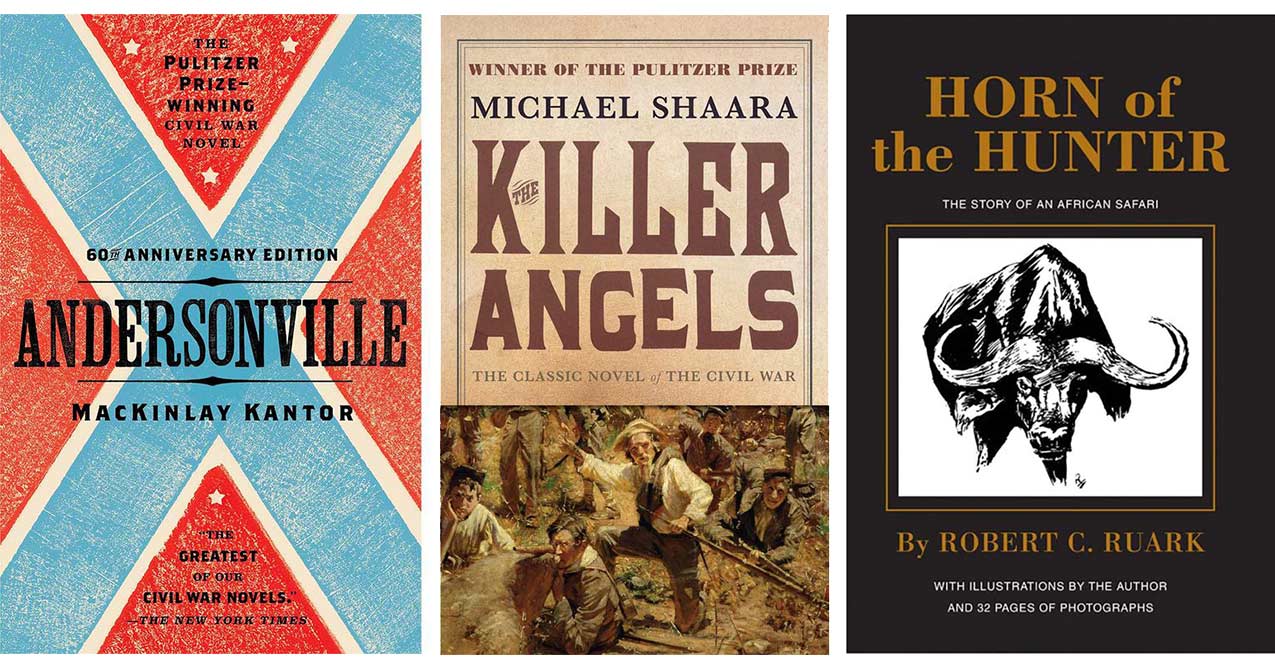 Books, the readers of this blog have said, give us books, and I have heard you, which is lucky, because I hear precious little these days.

These volumes fall into two categories, military and guns, because that’s what you seem to be most interested in. All are favorites of mine. I read Helmet for My Pillow when it was first published in 1957, and have been re-reading it ever since then. I read all three Bruce Catton books in a single weekend in 1967, and ignored everything else, including my first wife, who shortly thereafter became my first ex-wife. Not one of them has ever been out of print as far as I know, which is astonishing in the hardcover book biz.

The shooting and hunting books are a little different. Whereas military history deals with what happened and can’t be changed, gun and hunting books are driven by technology and the state of the wilderness, which is always in flux. Guns now ain’t what they used to be, nor is hunting. But the books here have stood the test of time. I know, or knew, all the writers except Ruark, and I read them over and over to have the pleasure of their company again.

I once met Finn Aagaard in a herd of gun writers on their way to a hunt, and when he saw me he positively beamed.

“That’s because,” Finn answered, “when you’re here I’m not the deafest one around.”

The author was a professional writer, and it shows. After all these years, it is still the best memoir of WWII by a Marine.

Sledge was not a professional writer, and it shows, but he had an unmatched eye for detail and a very strong sense of right and wrong. Much different from Leckie’s book. This is the other great Marine account of WWII.

Now nearly 60 years old, and still the definitive history of the Korean Police Action. It looks at the conflict from the squad, platoon, and company level, and makes you very glad you were not there. Required reading at West Point.

Written in 1955 and the winner of a Pulitzer Prize, this is a novel that revolves around Camp Sumpter, the Confederacy’s hellish prisoner of war camp in Georgia. Kantor’s ability to capture the speech of the times, and what the camp must have been like, are absolutely uncanny.

Another Pulitzer winner, this time vintage of 1974, Shaara puts us into the heads of a dozen of the key officers at Gettysburg. A reasonably bad movie was made of the book a couple of decades ago. The author wrote a number of other novels but never came close to this one.

Short, ugly, highly personal, and still the ultimate book on Vietnam. When Herr finished his year there, he came home and had a nervous breakdown. He earned it.

Catton’s three-volume masterwork. All other Civil War writing pales beside it.

Short, unprofessional, and the best memoir yet of a paratrooper in WWII. Burgett served in the 101st Airborne, and at war’s end was one of 11 men of the original 200 in his company to survive. He was wounded three times, had his rifle shot out of his hands twice, and lived to be 91 years old.

Jones is best remembered as the author of From Here to Eternity. He was a private in the Regular Army at Pearl Harbor and saw the Japanese attack. He served on Guadalcanal before being wounded and sent home. This book is a collection of the great combat art to come out of the Pacific Theatre, along with Jones’ recollections of his service. There is nothing else like it.

Sajer (not his real name) was a 19-year-old Alsatian who was drafted into the German army, barely able to understand the language. He got to invade Russia and somehow managed to return to Alsace. The book is a testament to how much a human being can endure and still live and remain sane.

Were there ever two more unlike generals? Did any two generals ever act as nobly as these two to bring about the end of a war? Smith’s masterpiece is a back-to-back comparison of the impoverished Virginia aristocrat who was the son of a Revolutionary War hero and the son of an Ohio tanner, both of whom rose to greatness. You can’t put it down.

The best book ever on African safaris. Short and absolutely irresistible.

Who better to inform us on the subject than Craig, who crossed the 100-safari mark long ago? He has used everything, and used it a lot. Unlike most gun writers, he has no horse to ride, and will give you a fair, honest, and in-depth accounting of what works for what.

The first edition came out in 2006 and was so good that volume two appeared three years later. Terry, like Craig, has great gobs of African experience. His genius lies in describing machinery, and why it works and why it doesn’t. He is a writer of strong likes and dislikes, and lets you know about them.

You should read both Safari Rifles II and Dangerous Game Rifles because they’re very different approaches to the same subject. Craig’s book is as much about how rifles are used as it is about the guns themselves. Terry sticks mostly to what works and why, and what doesn’t, and why. You can’t read one without the other.

You can get it for the hardware info, but I like it as a picture of an Africa that no longer exists, and which I wish I had seen.

The guns have changed some, but this is still the definitive book on the subject.

Jim’s masterpiece, it was published in 1985, and rifle shooting has probably changed as much since then as it did between 1750 and 1950. Nevertheless, it holds up very well. Carmichel is either a Southern humorist who was trained as an engineer, or an engineer who is a Southern humorist. Both are much in evidence, and if you haven’t read it, you may consider yourself an unlettered savage.

Finn, who died 19 years ago, would have absolutely detested the way hunting has changed. He was wry, funny, and believed devoutly in common sense and simplicity. If you were booked to hunt with him and told him you intended to shoot your trophy at long range, he would have returned your money.

The Late, Great Jack once described himself as someone who told a hunting story better than anyone else, and he may have been right. His gun stuff is worth reading only because he was so entertaining, but it’s pretty dated now. The hunting part of his oeuvre (a French expression of the sort that former English majors like myself like to throw around to show how cultured we are and which means “body of work”) holds up very well. And it is, of course, O’Connor.

Scott was a gifted writer, and his book is the best I’ve ever seen on this subject. I don’t care a farthing for the art of cooking unless someone else has done it and I get to eat it, but I read this little volume for sheer enjoyment. His description of a chuckwagon alone is worth the price.

The last page of Field & Stream has always been something of a sacred institution. From 1958, and for the next three decades it was called Exit, Laughing, and Ed made it his own. This book is reprints of his best columns. His stuff is still priceless and ageless.

One story I have to pass along. Ed always got his column in at the last minute, and one month he was really late.

I called him (we used telephones then).

“I can’t talk now, the ape bit my daughter.”

And he hung up without another word.

It was not writer’s b.s. He was telling the truth. He was boarding some kind of vicious primate for a friend who kept it as a pet. The creature did bite his daughter in a fit of ape pique, and he had to drive her to the hospital.

A Rumor of War was published in 1977, became a standout television miniseries three years later, and made Caputo famous. He was a Marine infantry officer who went with the Corps’ 9th Expeditionary Brigade to Da Nang, and thus began his long and dismal descent into one of our greatest national tragedies.

Caputo, who went on to win a Pulitzer Prize as an investigative reporter and has become a major novelist, is a writer of the first magnitude, and the difference between a war memoir written by someone with these credentials and a memoir by an non-professional writer like Eugene Sledge is the difference between a punch in the face from a Golden Gloves beginner and a punch in the face from a ranked professional. It is, Caputo says, a book about “…the things men do in war and the things war does to them.”