Best Bucks of the Month: October 2018

While some folks have been waiting for the rut, these hunters have already put once-in-a-lifetime bucks on the ground 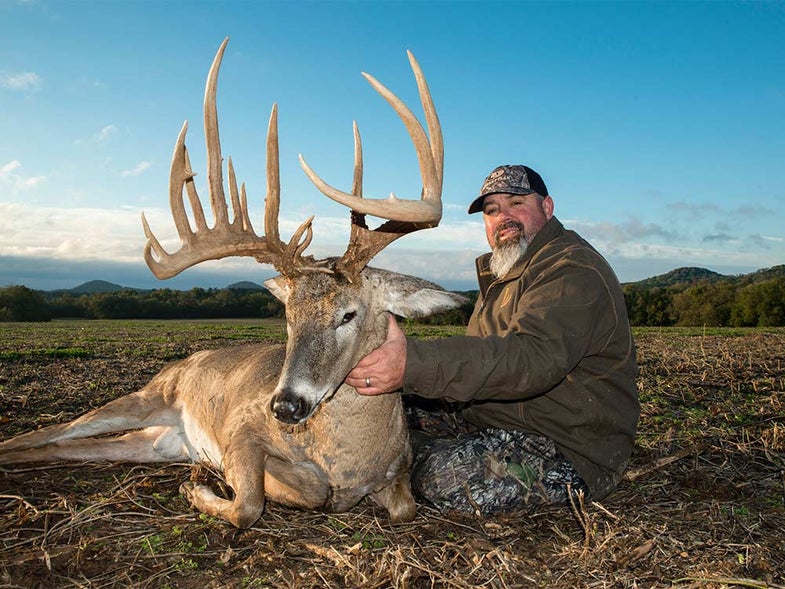 November is here, the month deer hunters look forward to all year. But before we look ahead to the chasing phase and the peak of the rut—and to big bucks pin-balling through the daylight timber—let’s first look back at some great deer taken last month. As the hunters in this gallery prove, October (despite the so-called “lull”) can produce some giant deer in its own right.

Here are some of the biggest bucks of the past month. We’ll be adding to this list as word trickles out about even more October trophies. 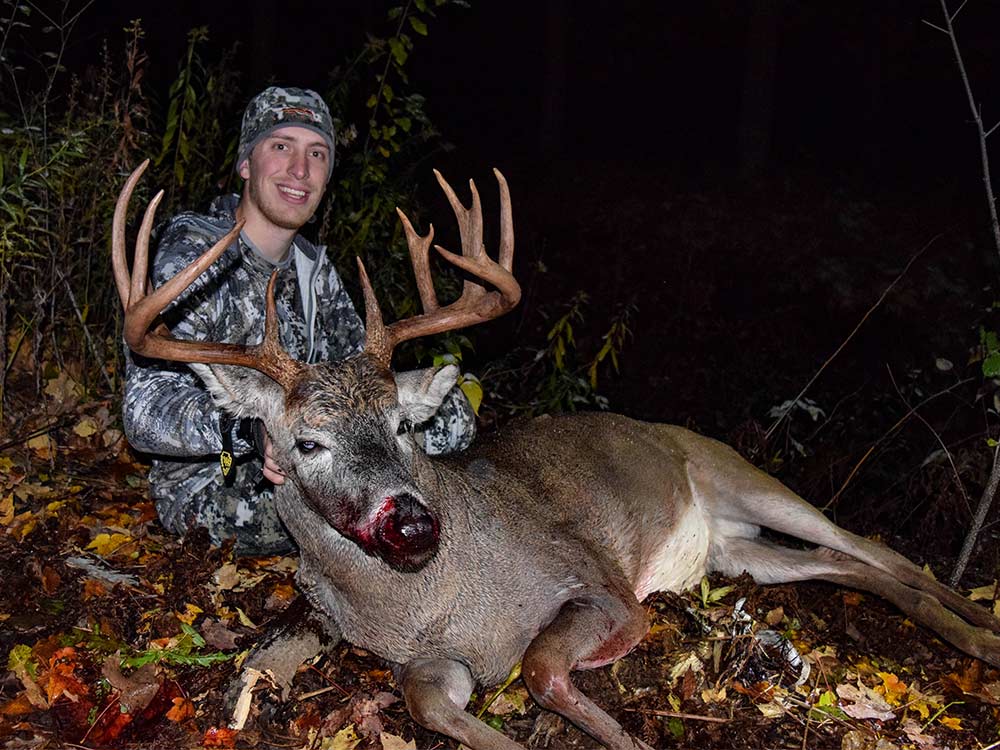 Alex Comstock had been monitoring this hefty buck since late July, when it first showed up on his trail cameras. “He was almost totally nocturnal until the last week of September, when he started showing up an hour before dark in the same area,” Comstock says. But early October weather turned nasty, with high winds and torrential rain. When the forecast called for a break on the 11th, Comstock climbed in his stand, and the buck appeared 45 minutes before dusk. The 152-incher sports split G2s and G3s and a 19-inch inside spread. 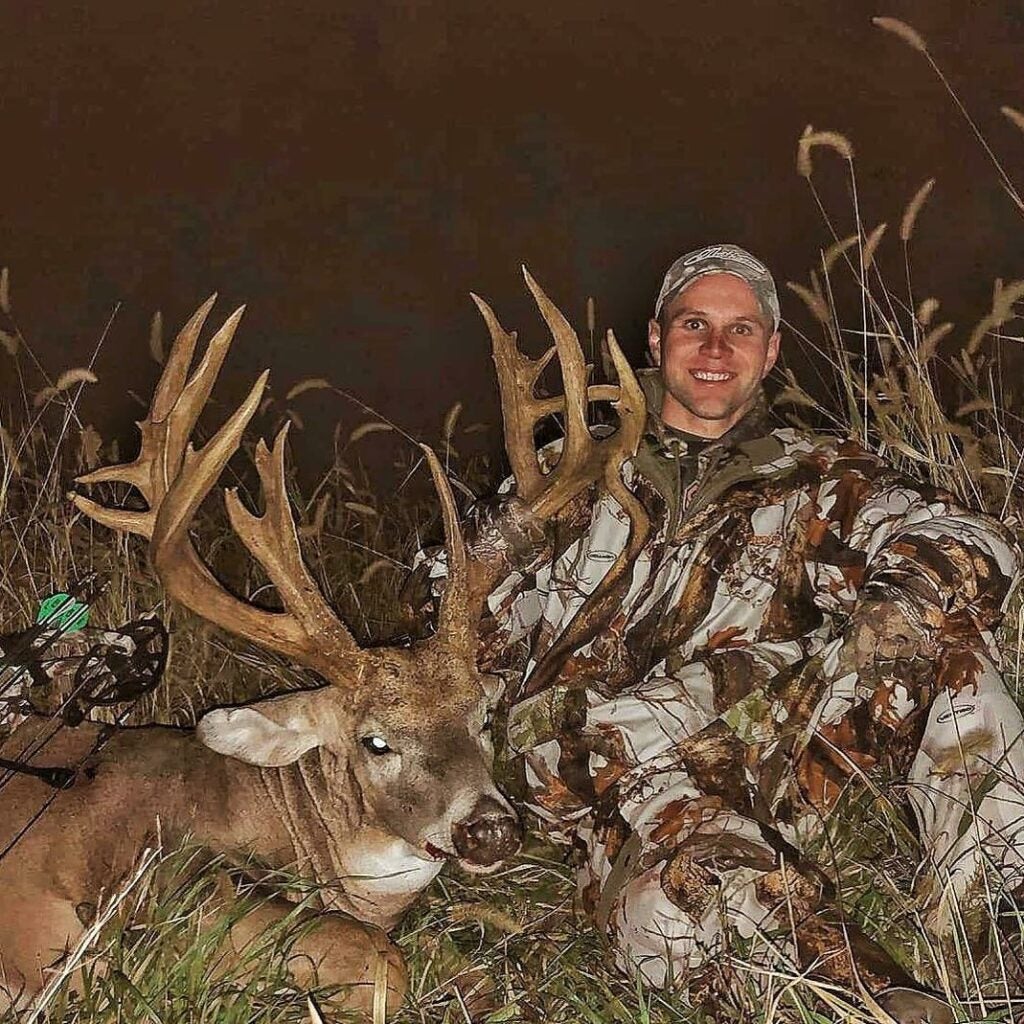 A 6:05 pm on October 11th, this giant Iowa buck followed seven does across a picked cornfield in front of Jared Thill. “It was the first day of the Red Moon, with a nice cool front,” he says. “I had a feeling I needed to take the afternoon off work and it paid off.” Thill arrowed the monster at 26 yards, which gross scored 215 inches. 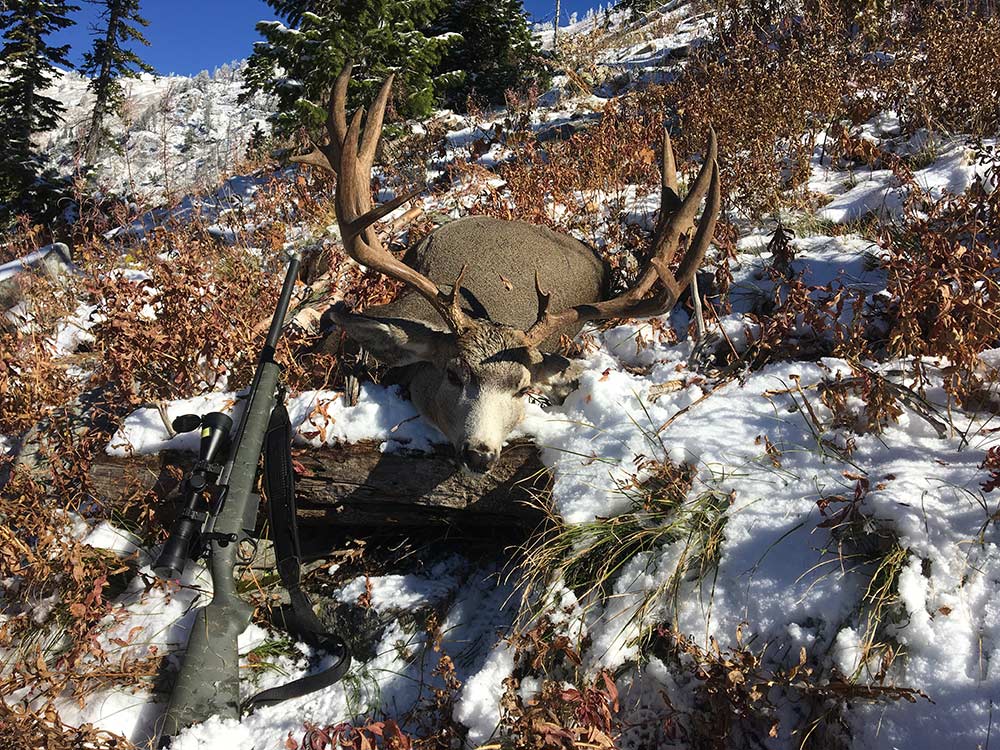 One of the toughest trophies going these days is a top-end mule deer, and the understood benchmark is a 30-inch-wide rack. Mountain hunter Robby Denning hit that mark and then some when he shot this whopper Idaho buck on public land on October 12. Denning used a Christensen Arms Summit Ti rifle in .270 WSM, topped with a Vortex Light Hunter 2.5-10x scope, to make a 130-yard shot on this mountain behemoth. In addition to incredible mass and character, the rack sports a 34-inch spread. 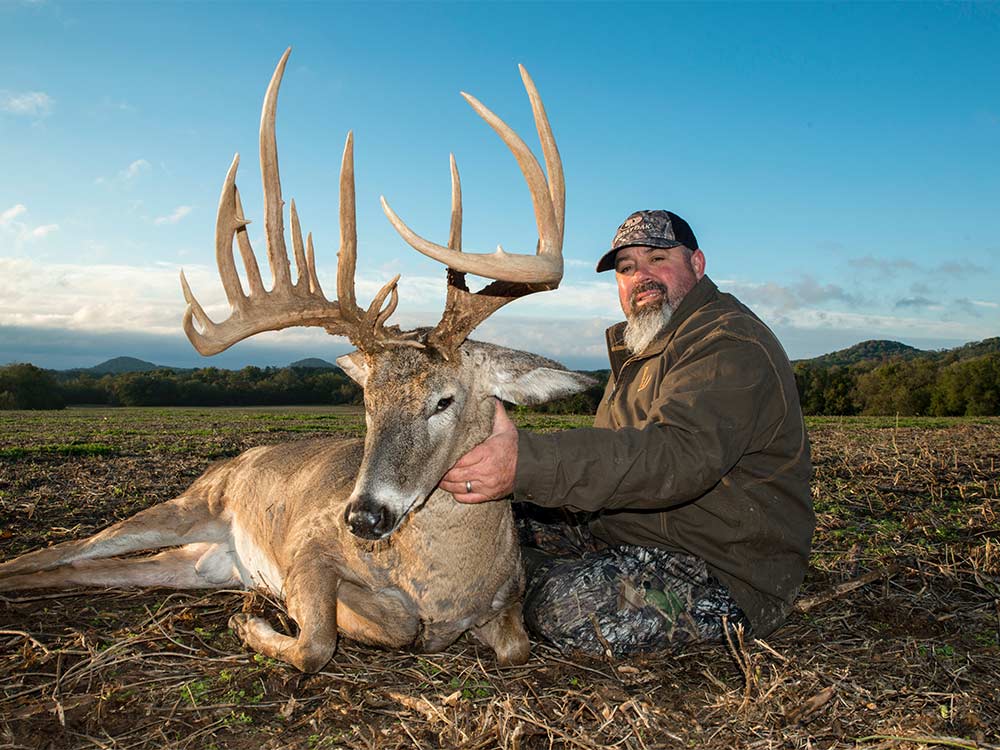 Buck #4: The Other Pike County Whopper

Say “Pike County” to most whitetail hunters and they immediately think of Illinois. But it’s been my privilege to hunt the Missouri version of the same with Indian Hills Outfitters’ owner Joe Ogden, and all I can say is this buck doesn’t surprise me one bit. We don’t have the name of the hunter above, but we know he was hunting with Joe when he tagged this incredible whitetail. I’d love to know the score of this tank, which seems to have only four points on the left side, and a veritable wall of tines on the right. 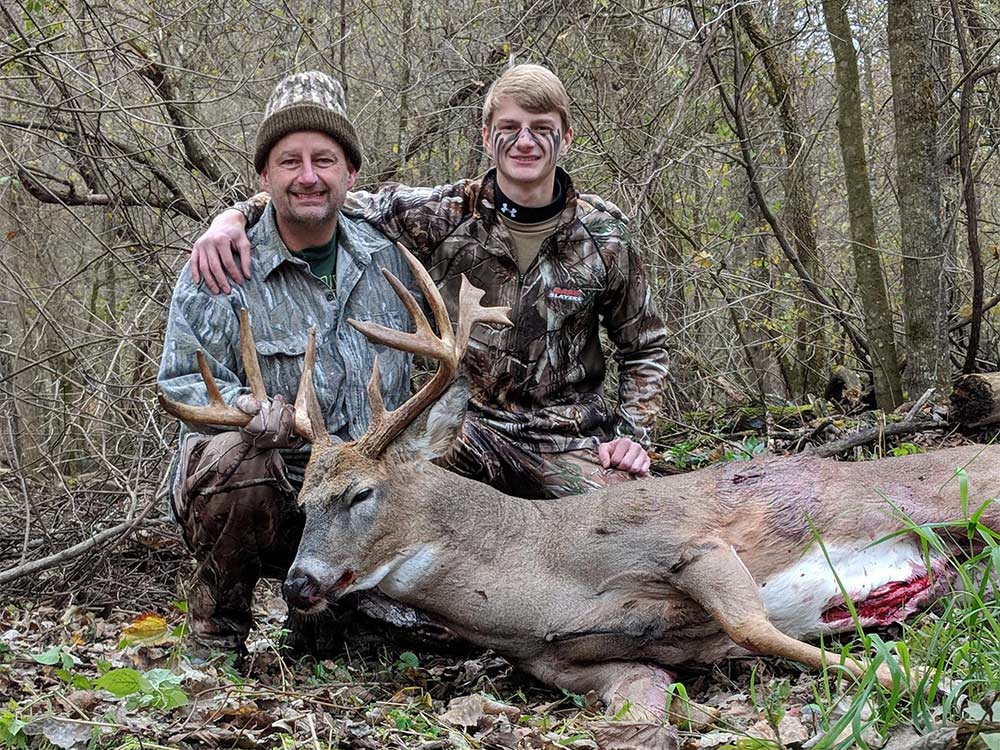 Mid-October can present some of the most inconsistent—and frustrating—hunting of the season. But southeast Minnesota bowhunter Bob Wick has hunted long enough to know that a good food source and a cold front can bust the dreaded lull. Wick was doe bleating from a stand in the oaks when this heavy-antlered 150-class buck came in to eat and investigate. 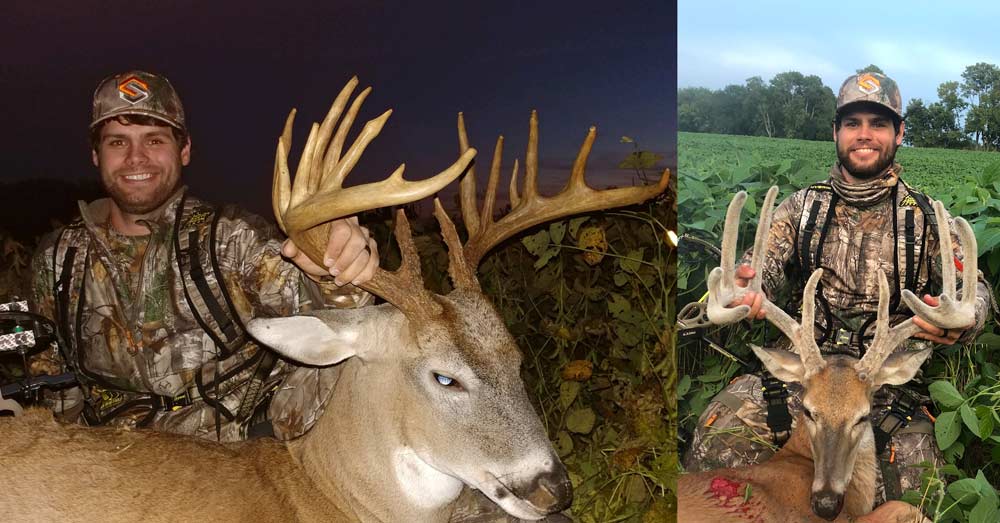 Stephen Tucker will be the first to admit he was struck by lightning when he killed the world-record hunter-killed non-typical whitetail in 2016. But just because you’re a lucky deer hunter doesn’t mean you’re not also good one, as Tucker proved this fall, taking another big Tennessee buck on October 18, a heavy-racked 160-class deer with 16 scorable points. And this was after taking a beautiful velvet-racked 140-class buck during Tennessee’s three-day buck-only season in August. 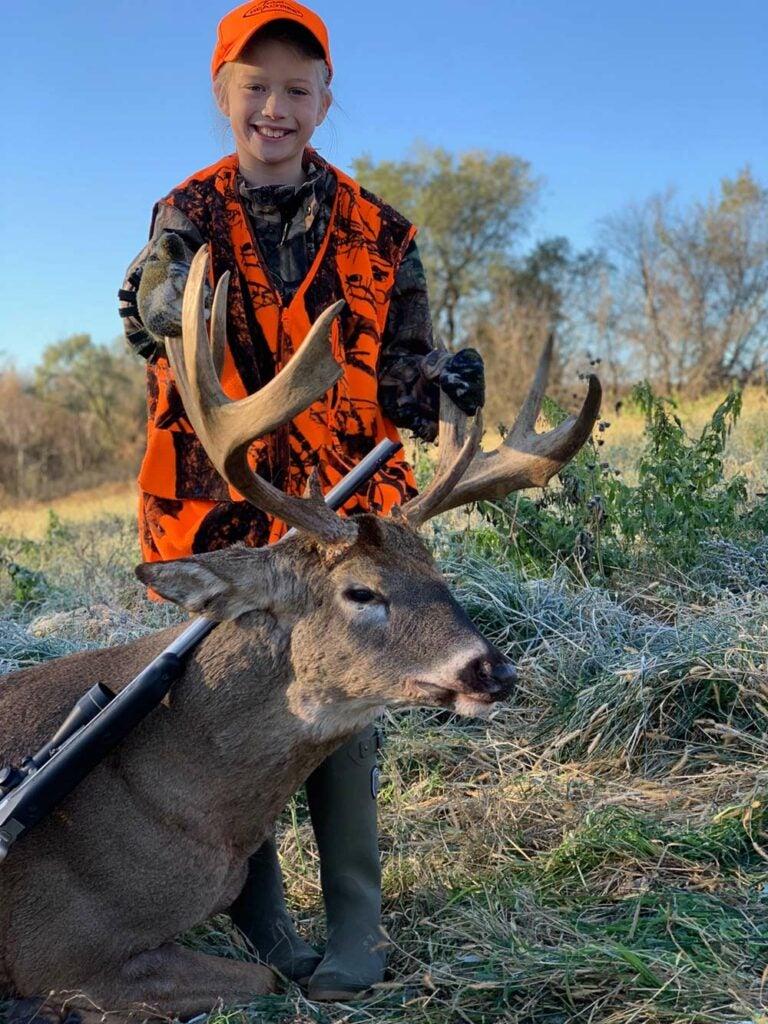 Minnesota’s youth deer season falls on the state’s teacher’s convention, which gives hunters age 10-16 a four-day weekend to hunt. Ten-year old Ava Runkel took full advantage of her vacation when she went hunting with her father on Oct 20. Sitting with her dad, Ava spotted this Gopher State monster, then made a perfect 35-yard shot with her muzzleloader. The 5½-year-old buck grossed 162⅝, with an estimated 10 inches of tines broken off from fighting. 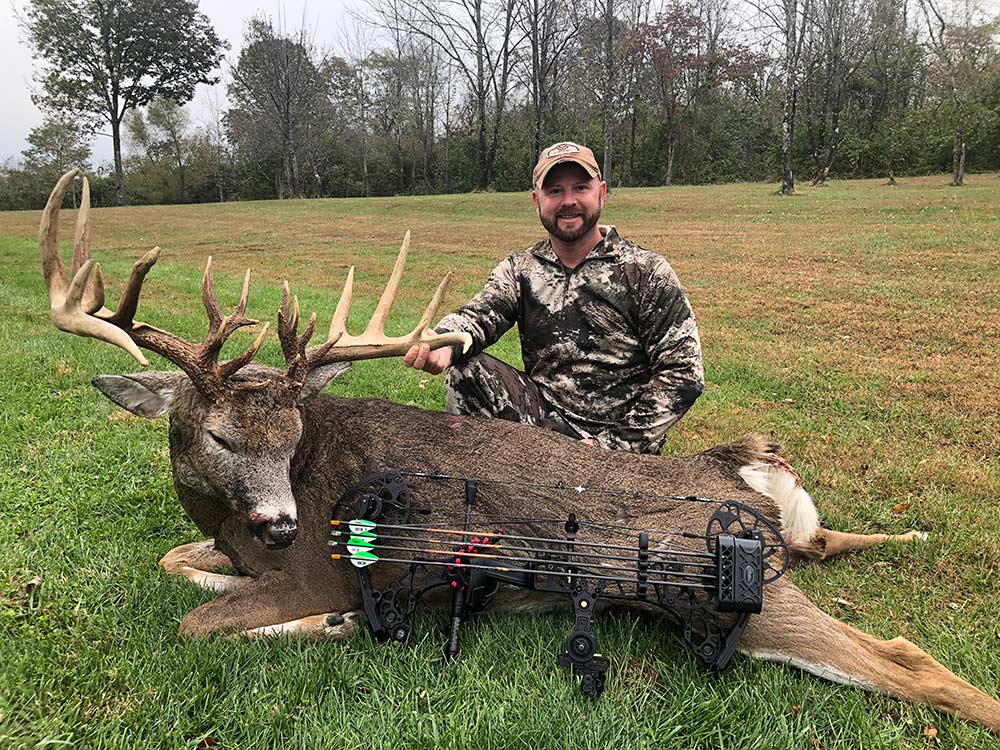 After 2 years of chasing this super-wide Ohio monster, Blitz TV crew member Davey Stuckey arrowed the once-in-a-lifetime whitetail on the evening of October 22nd, in Ross County. The deer rough scored 221 inches, and will be getting an official green score this week. Stay tuned, as we’ll have more info on this beast in the near future. 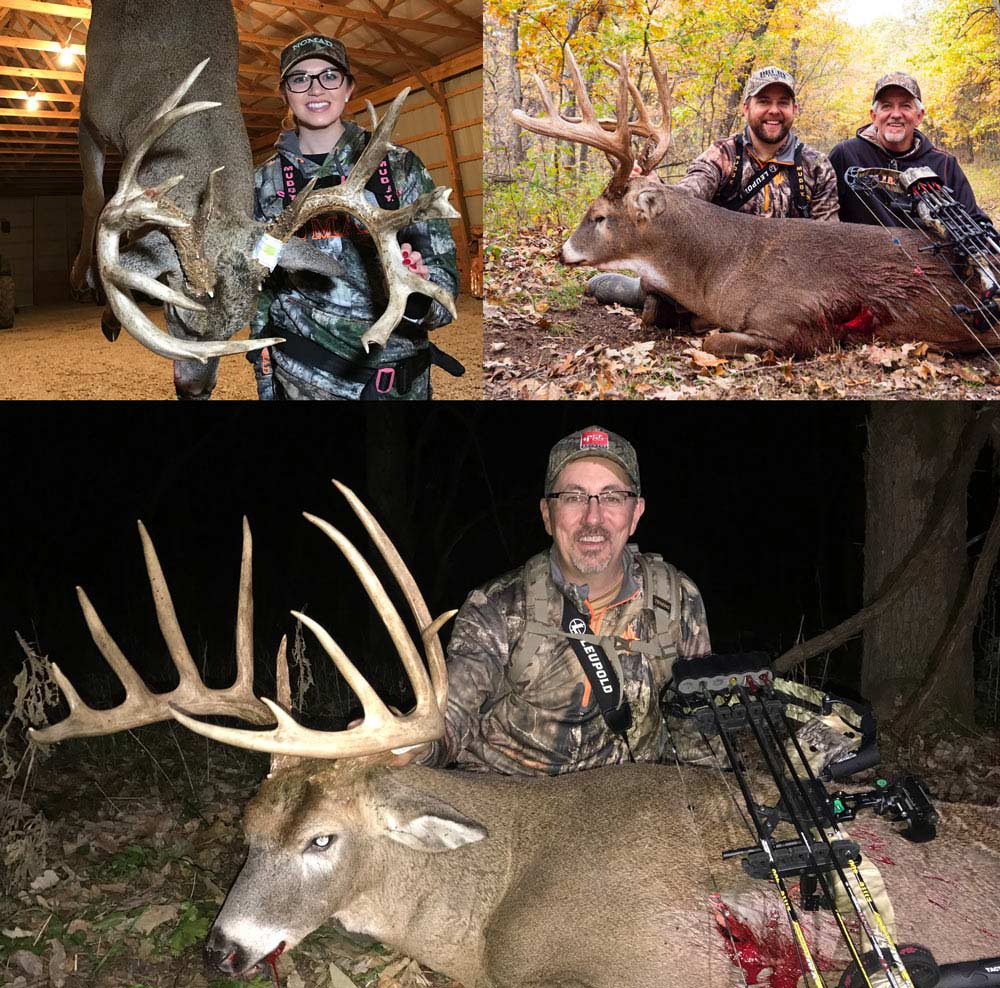 When the 185-inch, 5½-year-old buck (top left) started making daytime appearances on trail cameras in October, Taylor Drury and her dad, Mark, hung a stand at midday close to the buck’s suspected bedding area. Taylor hopped in the stand that night and watched the buck feed through an oak stand before popping out and giving her a 25-yard shot on the evening of October 23rd. Two days later, her cousin Matt Drury (top right, with father Terry) took advantage of sharply dropping temperatures in Missouri to arrow the 171-inch buck he’d named “Gnarly.” And one day after that, Mark Drury—no stranger to filling this space with at least one giant buck each fall—topped both youngsters with an Iowa buck he named “The One.” Drury waited for a low-wind, high-pressure day to slip into a food plot close to this buck’s bedding area. The187-inch monster fed into the food plot and made a fatal stop to check out a scrape at 21 yards from Drury’s blind. 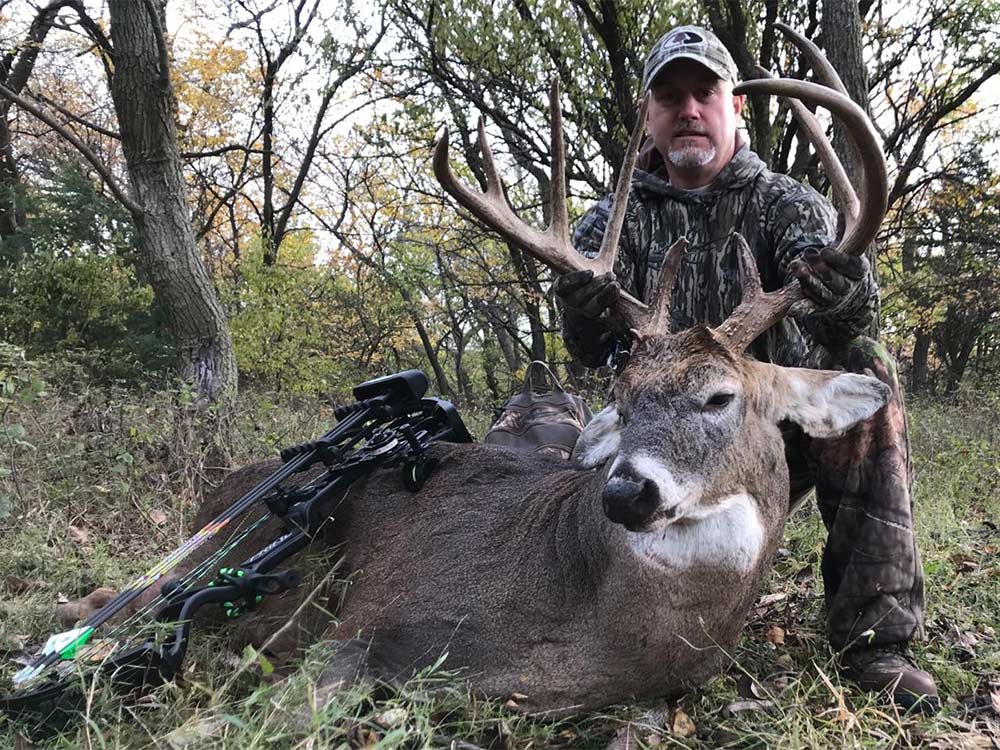 Ohio native Ben Rising is no stranger to killing mature whitetails; the former outfitter and now host of the webshow “Whitetail Edge” has been featured here before. Rising visited Kansas to pursue a 7½-year-old buck he’d named Evander Holyfield. “I hunted him for seven days in a row around his core area,” Rising says. “I had two encounters but couldn’t get him killed, until one morning when I finally caught him working a scrape line on his way back to bed.” The massive 9-point grossed 161. 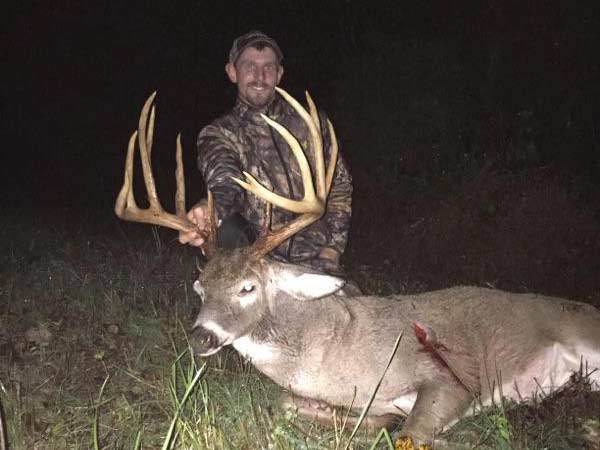 Carpenter saw this buck during Kentucky’s 2017 rifle season but had no shot. “He finally showed up on camera this year in late August, but I only had a few pics of him,” Carpenter says. Then on October 10th, the buck showed up again and seemed to like the area, showing up three out of four days on a southwest wind. “I waited for that wind and got it on the 22nd.” The buck came in at last light and stood at 15 yards, but Carpenter didn’t have enough light left to shoot; so, he let down and let the buck walk. “I left my bow and pack in the tree and went home.” Finally, on Oct. 26, Carpenter returned to the tree. “I was watching two scrub bucks when I just looked off to my right and there was Mr. October, making a scrape at 15 yards.” He took four steps into a shooting lane and Carpenter made a perfect shot. The tall-racked (a 13-inch G2!) sports 13 scorable points and grossed 178. 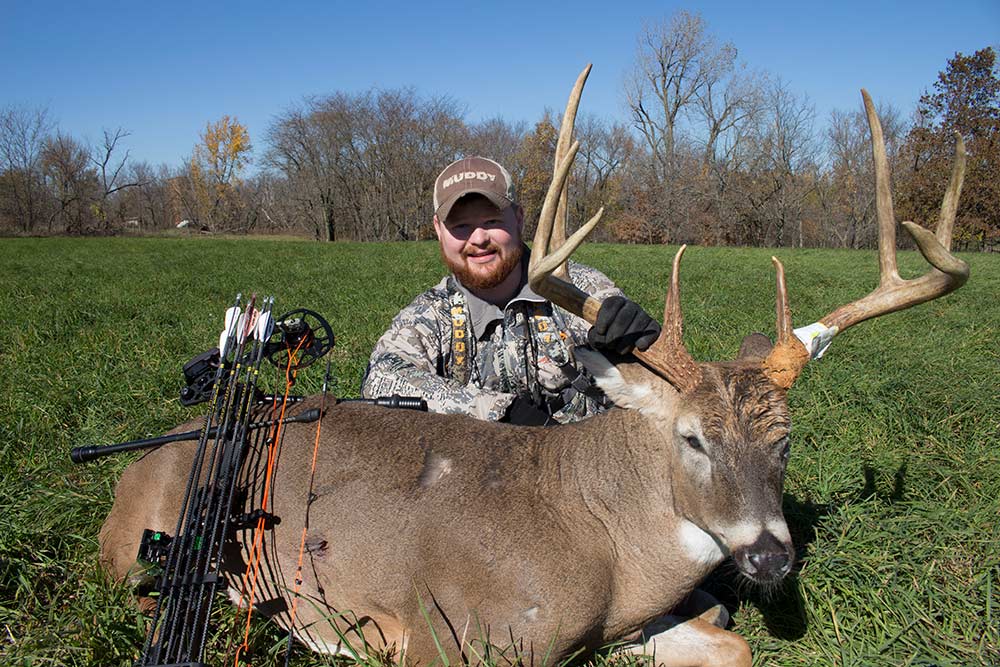 Blake Lefler played a game of rock-paper-scissors with cameraman Chris Dunkin to decide who would hunt and who would run camera on October 26th. Lefler not only won the hunter’s seat but also a chance at a great 8-point. Lefler watched the buck accompany a doe into a food plot, challenged him with a snort-wheeze, and made the 27-yard shot when the buck responded. 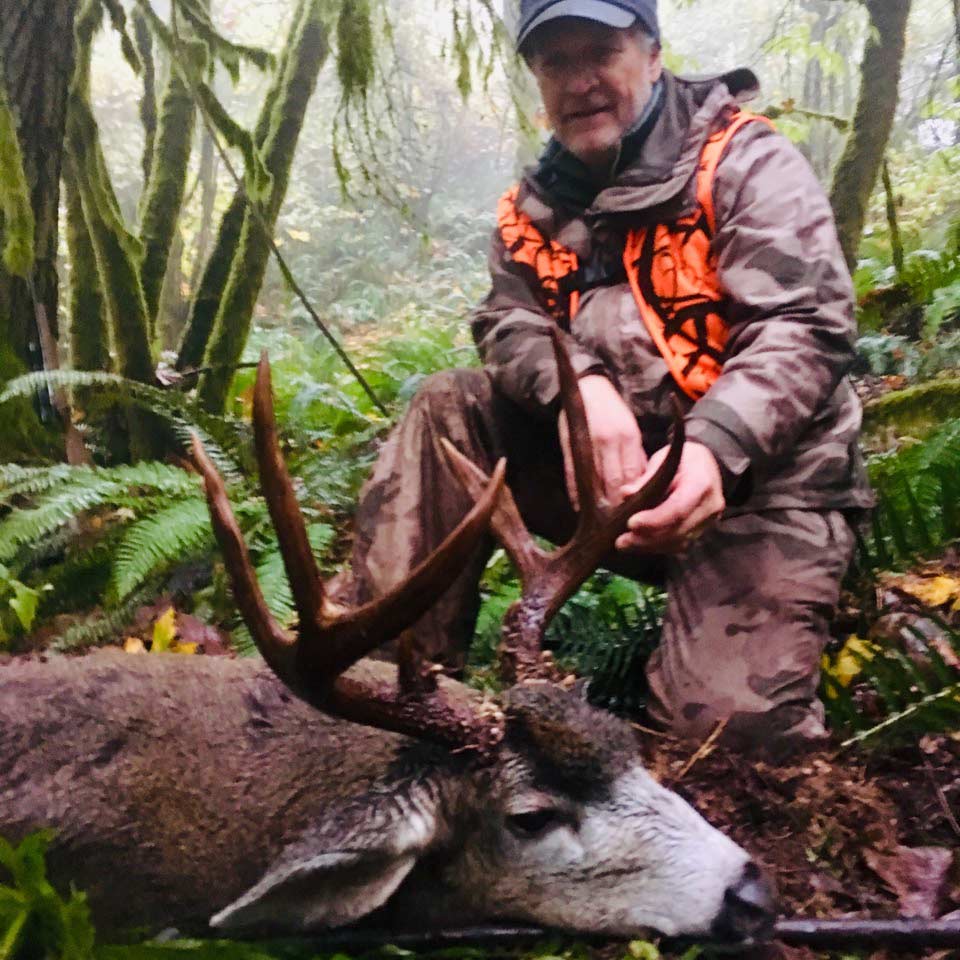 Jeff Mishler hunts in Oregon’s rugged and mountainous Trask Unit, where he chases wilderness blacktails. He’d been watching this 125-inch buck for years before finally getting it done this month. “I’d put him at 8 or 9 years old,” says Mishler. “My buddy missed him two years ago, and last year he outsmarted us all season. “We have over 200 images of this deer on trail cameras, and amazingly, his rack is smaller this year than last. I’m a big fan of public land and Backcountry Hunters & Anglers. Without it, hunts like this aren’t possible.” 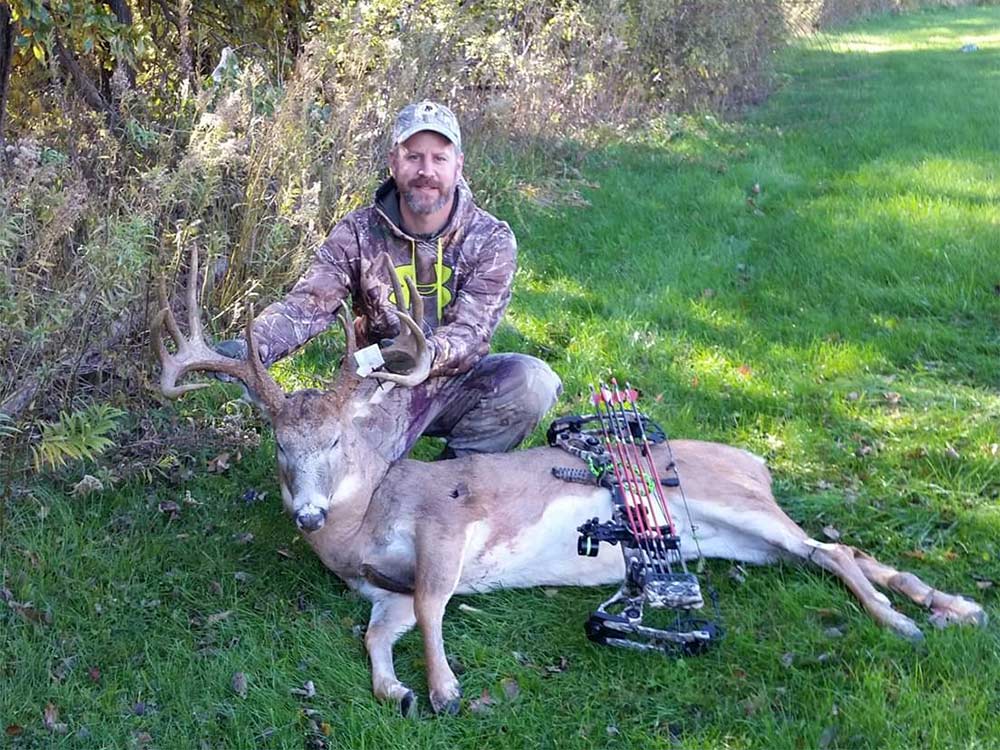 Central Illinois bowhunter Raymond Voss has taken some nice bucks over the years, but this deer was special. The heavy-racked 10-point is likely 7½ years old, an even more impressive stat than the 160-class B&C score. 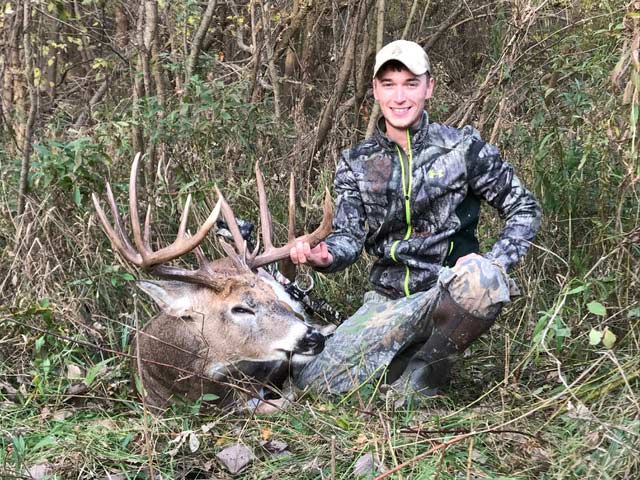 Jake Hewing had a busy day on October 30. After getting off work, he hustled to the timber to hang a treestand for the upcoming rut. That done, Hewing realized he had time to put up and sit in a ground blind just off a pinch point that led to a food plot. “This deer lived mostly on our neighbor’s this summer, but he showed up to check does on our food plot that afternoon,” he says. “It was only my third sit of the year.” Hewing’s buck is 20 inches wide and sports 18 scorable points. 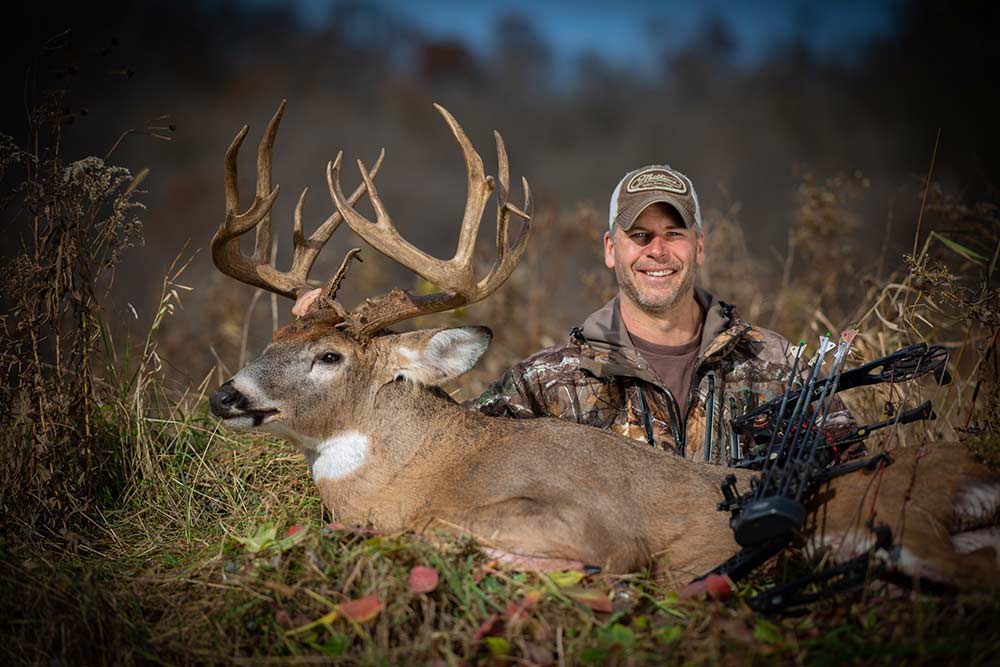 Wisconsin bowhunter Jason Eiring was hunting southeastern Minnesota with Schuhter’s Outpost Outfitters when he encountered a monster buck area hunters had been chasing for several seasons.

“Hollywood” walked past Eiring’s stand at midday on October 30, but the veteran bowhunter used a snort-wheeze call to lure the buck back into bow range. Hollywood sported 17 scorable points and green-scored 212-6/8″ B&C. 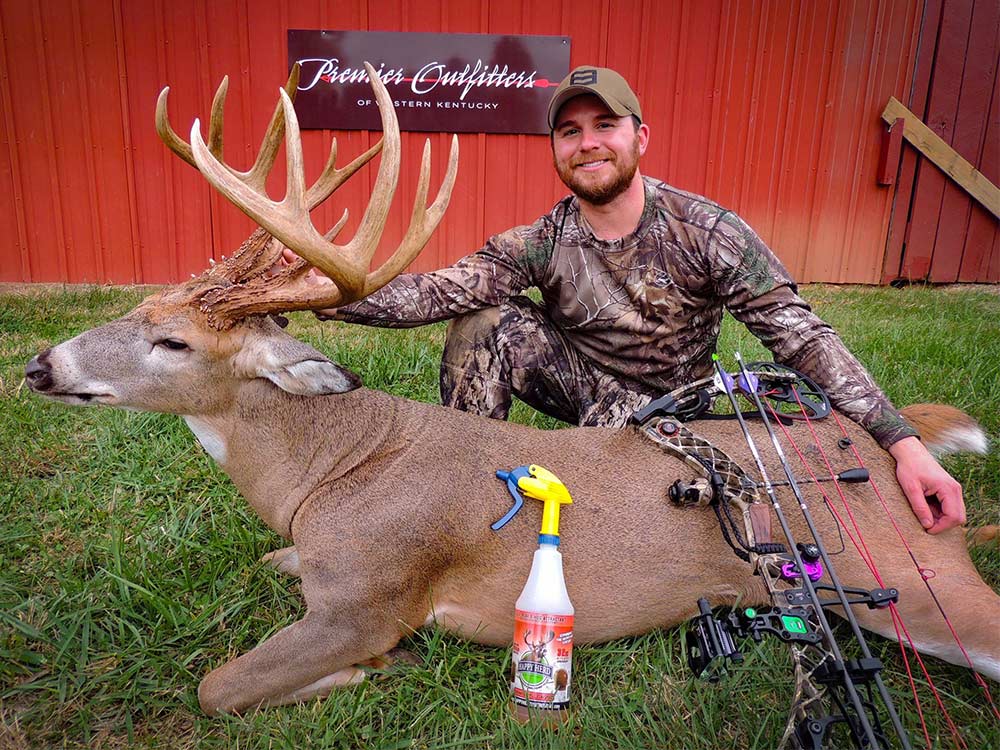 Think pulling an all-day sit is tough? How about four in a row, from the same stand! That’s what Andre Miller of Louisiana did to tag this perfect 170-inch 10-point. Miller was hunting with western Kentucky’s Premier Outfitters, and owner Mark Clifford urged Miller to stick with a stand he felt would produce.