The Best Bucks of October 2019 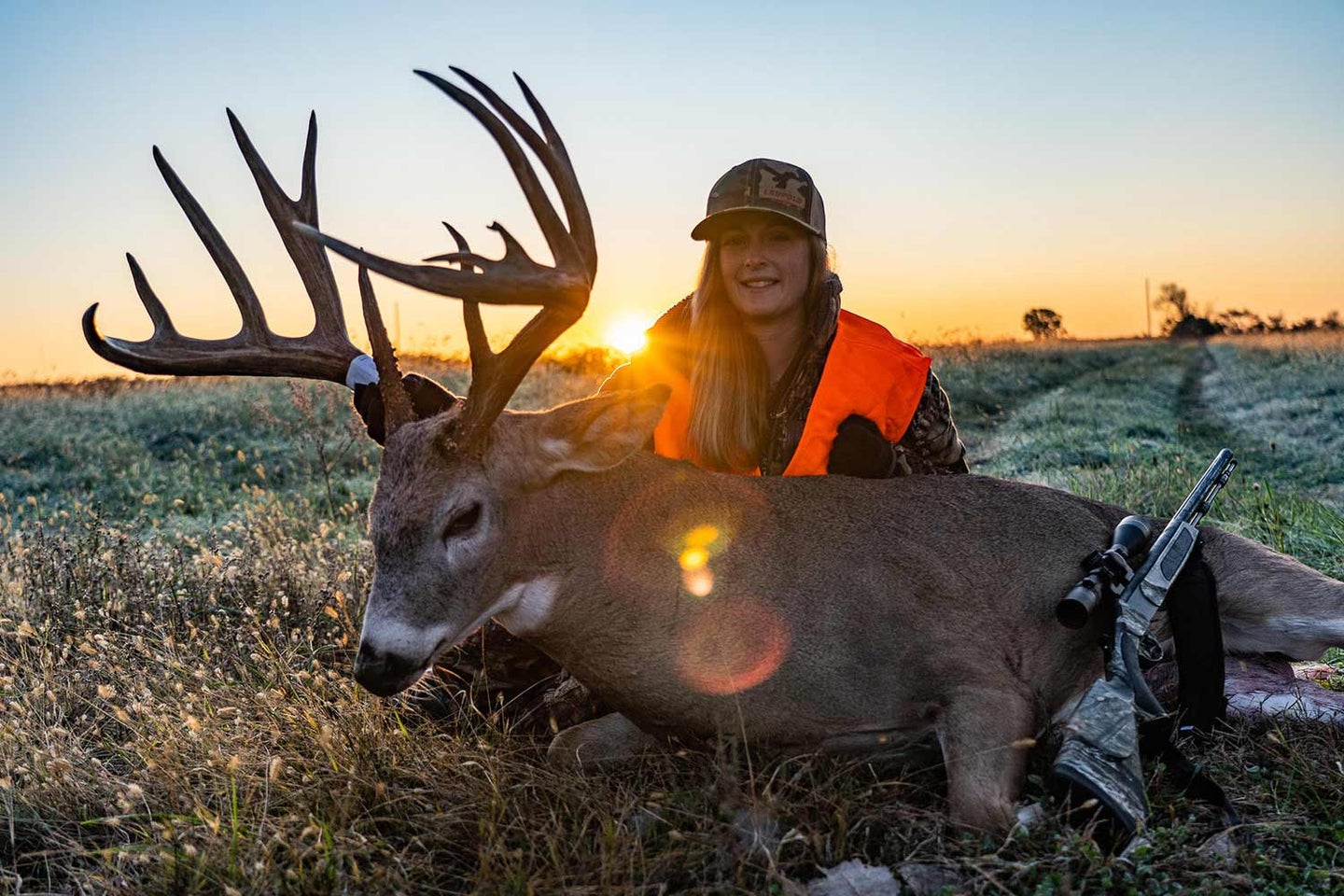 With the rut finally here and rifle seasons not far off, the number of big bucks hitting the ground is sure to skyrocket in the month of November. But October was no slouch. Warm weather and fast-changing food sources can make it tough to get on a giant in the tenth month, but that didn’t stop the hunters below from taking once-in-a-lifetime deer. Here are some the biggest whitetails and muleys taken in October 2019, including two deer that got the world-record rumor mill churning.

It’s not often a high-school kid sets the whitetail world on fire, but Guner Womack did just that when he shot this amazing 8X8, which had the “world-record” rumor mill buzzing. While the green score fell short of that status, it didn’t take a thing away from this incredible Oklahoma typical.

Talk about starting at the top. Brock Creel’s first buck may well prove to be his biggest-ever. “Everybody who has seen my deer is in shock, and they say the same thing,” he told the Alabama Outdoor News. “They say, ‘You know you’ll never again kill a buck that big.’ It has been pretty exciting for me, especially since I’ve hunted for about 10 years and the only thing I ever killed was a doe last year.” Creel arrowed the 19-point giant on the evening of October 27, while hunting a 16-acre property belonging to a family friend. Creel plans to have the buck rough scored in the next week or so.

The Hunting News posted a photo of this incredible Kansas buck on their Facebook page in mid-October. Word is the giant non-typ rough scores around 225. We are trying to track down the hunter for more info and will update as soon as we do. If anyone out there knows more, please write it in the comment section below.

The whitetail that showed up one of Luke Polzin’s cameras in November 2018 was so big that he saved the buck’s image and used it as his phone’s screensaver for the next year. “I nicknamed him ‘Ol’ Split Kicker’, and I looked at that pic every day and imagined what it would be like to harvest a buck like that,” Polzin says. On the evening of October 30, Polzin got his chance to find out when the buck showed up to check out Polzin’s decoy. “I passed a 40-yard shot because of the distance, and then a 26-yard shot because of a bad angle,” he says. “Finally, the buck circled the decoy until he was 20 yards away and perfectly broadside.” Ol’ Split Kicker’s harvest pic will probably be Polzin’s screensaver for the next year.

Taylor Byers had been tracking the progress of a buck she called “Dakota” for four seasons and was determined to tag the monster this year. But Dakota disappeared from Byers’ trail cams about the time EHD hit the area and decimated deer populations. Though Taylor feared the worst, she waited for an October cold front during Iowa’s early-muzzleloader season, and to her amazement, the buck she assumed was dead appeared on the soybean food plot, eventually working toward Byers’ blind and giving her an 80-yard shot.

South Dakota Big Bucks posted this photo on their Facebook page on October 15. Word is, the buck was taken by Jae Koletsky of Yankton, S.D., and the preliminary rough score is 204 typical. We’re not sure if that’s net or gross. If it’s the former and that score holds up, Koletsky’s bow-killed giant could threaten Mel Johnson’s longstanding archery typical world record of 204-4/8. And if the buck’s right side matched its left, it might have a crack at Milo Hanson’s all-time mark. We have reached out to the hunter and will update if we get more info.

Stuart Danielson had played cat and mouse with this prairie giant for two years. Finally, on the evening of Oct. 29, all his recon resulted in a 23-yard bow shot. The main-frame 10-point grossed 172-⅞ inches B&C. “It’s hard to describe my feelings when I walked up on a buck I’d spent two years chasing,” Danielson says. “But I wish every hunter could experience it!”

Seven-year-old whitetails are rare almost anywhere, but in southern Minnesota they’re like hen’s teeth. Dave Olson had been getting pics of an 8-pointer that never really grew much after its third set of antlers, but in fall 2018 the buck threw a drop tine that only got bigger in summer 2019. The unique rack and huge body of the buck got under Olson’s skin, and the deer became his target animal. Olson saw the buck twice in September, but never within bow range. Taking advantage of an October cold front, Olson headed to the buck’s wheelhouse and finally had the close-range encounter he needed.

Steven Koenen must be living right. As the proud father of a newborn baby girl, Koenen knew his hunting time would be limited this fall. That didn’t stop him from holding out for a monster buck that lived on his father-in-law’s property. Not only did the buck show up for one of Koenen’s few hunts, but when the excited bowhunter missed the first shot, the buck ran off for two minutes, then reappeared to give Koenen a second—and even closer—shot opportunity. Koenen made good on the bonus round, and can now go back to dad duty.

The original rumor was that this 190-class South Dakota muley was taken in early October. Turns out it’s a September buck, but only by two days, so we’re letting it go. Blaine Fitzgerald took the giant near West River, with a 35-yard bow shot. When I asked him for details he said, “I don’t remember a whole terrible bunch because my adrenaline was through the roof.” Who could blame him? “I shot him on September 29, my birthday.” That’s one heck of a present.

Erika Meister had a pretty good reason for missing the opener of the Wyoming deer season: she’d just given birth to a baby boy. “But I was feeling great soon after, and was excited to get out and try to fill my tag. With only four days of the season left, I was blessed to take this beautiful buck!”

This crazy buck popped up on social media last month and has been making the rounds since, including on Trophy Bucks of Iowa, where it was posted on October 12. We have no idea at this point if the buck is legit or not, but it is cool to look at. How would you like to score that mess? The only bit of info flying around—which is still only rumor at this point—is that the buck was taken in Kansas.

Red Dog Outfitters owner Tim Clark had just one summer sighting of this gorgeous typical whitetail, which then pulled the mature-buck trick of disappearing for a couple months. When the buck reappeared in early October, Clark used a series of pics and sightings to put together a game plan. Client David Shelby arrived for a pre-rut hunt in late October and, on the afternoon of his first day, arrowed the heavy-racked buck from 12 yards.

We’re still waiting on details from hunter Tyler Manning about this South Dakota monster, so look for an update soon. At the moment, we’re not clear if Manning arrowed the deer in late-October or early-November deer, but either way, it is one impressive muley. More important than when, however, is what—as in, “What is the inside spread on that beast?” Word is that the buck rough scored 204-5/8—and that it’s the second 200-incher Manning has arrowed in as many years.