These are the greatest waters, coast to coast, to find big bass this autumn 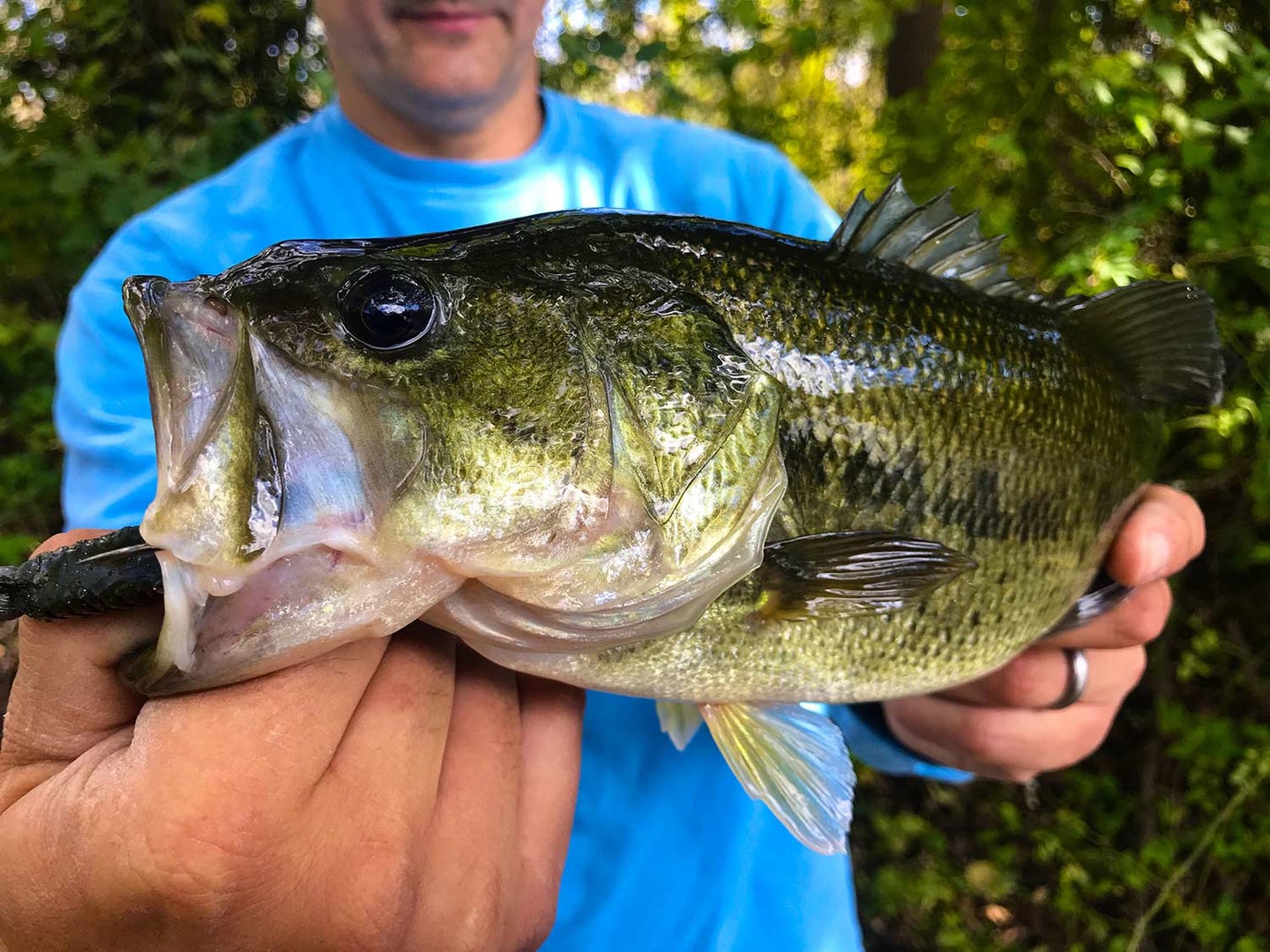 Spring is the time when largemouth bass anglers go on point, ready to drop everything in search of a wide-open bite as fish prepare for, engage in, and depart the spawn. But with that excitement comes crowded waters and finicky fish which react negatively to even the slightest change in conditions. In the fall, however, big bass are more stable and therefore more predictable. They’re feeding in preparation for winter, and following baitfish migrations that occur like clockwork. If your friends are in the deer stand or watching football, launch the boat and bank on some bucketmouths.

Perennial powerhouse Lake Sam Rayburn, in far East Texas, is loaded with largemouths of all sizes—including some true Texas trophies. It provides anglers the opportunity to fish any way they’d like with everything from grass to standing timber to offshore structure. This has been an especially wet year, so the shallow-water cover has remained flooded, too. Fish the area around the Highway 147 bridge for the most consistency, although traditional hotspots like Veach Basin and the Five Fingers always have solid populations of fish.

Top Tactic: Run brush piles with a deep-diving crankbait such as a Strike King 5XD or 6XD and you may come across the motherlode of fish. But there may be no more exciting way to catch them than on the topwater. A Vixen walking bait or Whopper Plopper can elicit some heart-stopping strikes.

Tip: Side-imaging is one of the deadliest tools ever invented for bass fishing, allowing you to distinguish not only different types of cover, but also different types of fish. On a lake like Rayburn, you won’t want to be throwing your crankbait into pods of white bass, yellow bass, or crappie when you’re looking for largemouths.

The “Cal Delta” near Sacramento provides an endless maze of sloughs, canals, and ponds to get lost in, but its tidal reaches produce big bass—like 10 pounders—and it often takes an average of 5- or 6-pounds per fish to come out on top in tournaments. There’s been some weed-spraying in recent years, but there’s still enough grass to allow for solid spawns each year.

Top Tactic: Flipping and cranking may be the most consistent breadwinners here, but this is the place where topwater frogging became mainstream. Find thick mats of grass and skitter a SPRO or SnagProof frog across the cheese. Have a comeback bait ready to fire into the hole when a 10-pounder knocks your amphibian skyward and darts around looking for its misplaced prey.

Tip: If you can’t spend endless hours idling and fishing, develop patterns from home with Google Earth. Need dead-end canals, or small backwater ponds to run your system? You can identify them on a screen, export the coordinates to your GPS, and pre-fish without launching the boat.

Few major tournament venues get pounded day-in and day-out like Lake Guntersville, but few continue to pump out such massive bags of fish, either. The prolific aquatic vegetation create great hiding places and enable successful spawns. And fish have ample shallow and deep water cover and structure to chose from. In the fall, anglers on Lake Guntersville chase bream and both threadfin and gizzard shad aggressively from the dam up into the far reaches of the headwaters.

Top Tactic: The grass that made the Big G famous holds the most reliable populations of bass. Look for points and divots and focus on those distinctions, punching a creature bait affixed to a ¾-ounce-plus weight under the canopies.

Tip: If you’re ever “lost” on a quality lake like Guntersville, unable to make shallow or deep patterns work, look to bridges and riprap. They constantly hold fish and consistently provide tournament-winning catches. Bounce a medium-diving crankbait down the rocks or throw an Alabama Rig into current seams and prepare to stay all day.

The home of the London Bridge—just a few hours from Vegas, Los Angeles, and Phoenix—may be best known as a summertime party lake, but in the fall, the crowds die down, and anglers can move around more freely. It provides the best of all worlds for bass anglers, with tullies to flip up the river and classic structure to fish with finesse tactics on the lower end of the lake.

Top Tactic: There’s a reason that most Arizona anglers are good with a dropshot—it’s deadly here. Use your sonar to find small humps and ditches and identify the bass before you make the drop with a 4- or 6-inch straight tail worm.

Tip: Man-made structure, including fish-attractors created to attract baitfish and panfish, will consistently hold bass, too. The Lake Havasu Fisheries Improvement Program put several dozen “cribs” in the lake and they all hold largemouths at times.

One of America’s most historic rivers, the James is now also one of its best bass fisheries. You can fish near places like Jamestown and Colonial Williamsburg and hope to catch a legitimate 8- to 10-pounder in a place that was long known for smaller fish. The tide is key here. Whether you’re on the mainstem of the James itself or major tributaries like the Appomattox or Chickahominy, the best times are usually the last few hours of the outgoing flow.

Top Tactic: A small squarebill crankbait bounced off cypress knees and through laydown logs will produce arm-jarring strikes. Chartreuse with a black back is a solid choice, but old-time river rats often employ a gold-foiled version.

Tip: Learn to use a tide chart to create a milk-run that allows you to maximize the best windows of opportunity, but make sure you are on your best spots at the prime time.

When this Texas-Mexico lake burst onto the scene a decade ago, the reports were unbelievable. With 50-pound limits occurring occasionally, 10-pounders didn’t necessarily merit a second look. Then came the pressure and a few down years, but now the lake is bouncing back.

Top Tactic: Flipping hardwood bushes and trees can be fun, but rock is often king on this big impoundment, and bouncing a medium-running crankbait on hard outcroppings and the end of points is a repeatable pattern where the bass reload every day.

Tip: Big bass often require braid to get them out of gnarly cover, but learn the limits of your fluorocarbon too. Sometimes it’s critical in order to get more bites from surprisingly finicky fish. It has more stretch than braid but less than mono. Buy a low-memory brand and change it out regularly.

Table Rock is a classic Ozarks triple threat, with largemouths, smallmouths, and spotted bass all on the menu. It’s the chunky largemouths that typically win tournaments, though. You’ll need a few in your bag to outlast everyone else’s cookie-cutter limits. Fortunately, the lake is full of them and while they don’t grow to Texas-size proportions, there are plenty of 5- to 7-pounders to keep you engaged.

Top Tactic: While this region popularized both the suspending jerkbait and the Whopper Plopper, sometimes it’s best to go old school with a 10-inch plastic worm. Drop a plum or redbug version in manmade brush piles, and at the end of long points, and drag it slowly until a trophy picks it up.

Tip: Bass key in on migrating shad during the fall. Start midway back in a tributary with defined channel banks and fish or graph until you intercept the bait. That’s where the bass will usually be, too.

Fly into Vegas and take a gamble on this big desert lake. Summertime outings here can be brutal, as the dry heat feels like an oven, but the cooler temperatures of fall heat the fishing up and allow for a comfortable day on the water. Western finesse techniques work, but there are plenty of shallow bushes where light line will leave you heartbroken, and reaction baits on heavy line can rule the day.

Top Tactic: Nothing beats a jig year-round on Mead, and you can fish it on deep cover, along bluffs, and in the lake’s heavy cover as well. If you can only have one lure, that’s the one to choose. Brown and purple is a locally preferred color pattern.

Tip: In clear water, speed is the key to power fishing. Whether using a jig, a spinnerbait, or a topwater, keep it moving to force bass to react.

Previously overshadowed by its Tennessee River siblings like Guntersville and Kentucky Lake, Chickamauga has come into its own in recent years. The story is the grass and the stocking of Florida-strain bass, plus the comparative lack of fishing pressure. The evidence lies in the multiple teen-class fish that have showed up at the end of anglers’ lines.

Top Tactic: Listen for sunfish making Rice-Krispies-popping sounds to find key areas, then target the bass with a one-two punch of flipping and frogging.

Tip: Add rattles to your hollow-bellied frogs to help fish key in on them through the thickest grass. That allows a slow-but-noisy presentation that is the best of all worlds.

The Nation’s River consistently kicks out quality bass in large numbers, thanks not only to thick grass beds, but also to hard cover including historic sunken barges and wharves. With 60 miles of fishable river, and a tidal ecosystem that changes by the day, it’s never the same fishery twice.

Top Tactic: As the submerged aquatic vegetation starts to break up in the fall, it can become nearly impossible to get a lure through it unscathed. Turn to the Potomac’s plentiful hard cover and make a list of 10 or 12 key spots to hit as the tide best allows.

Tip: With relatively few places to launch major tournaments, several key tributaries may hold outsized percentages of the bass. When things get tough, hunker down in those areas and don’t leave.