The finest bronzeback fishing of the entire season has arrived 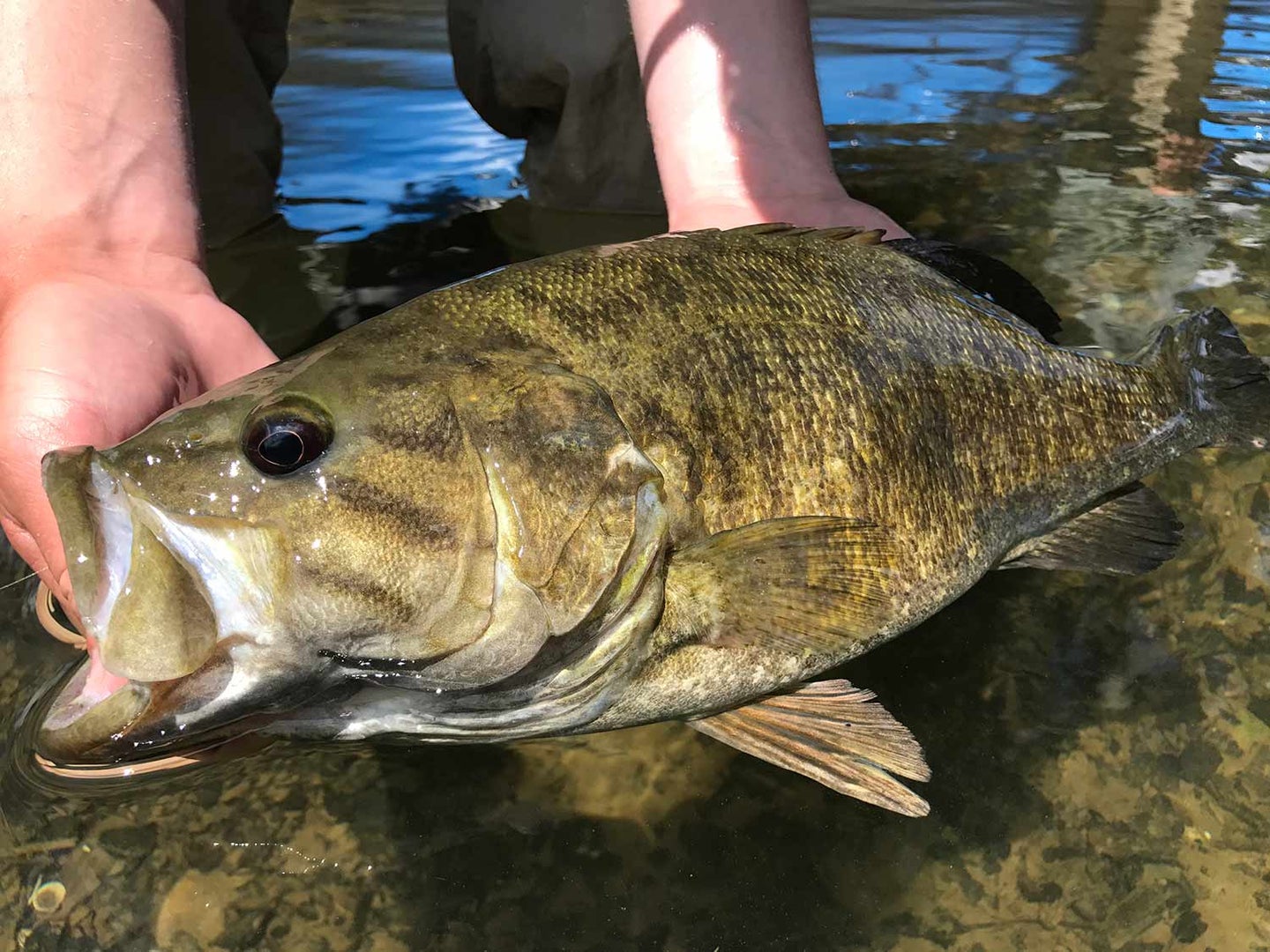 River fish aren’t supposed to get this big—but they do. Joe Cermele
SHARE

Are you ready for some football? That’s the war cry heard across much of the country throughout the fall, and the uninitiated think it refers to a sporting event involving a pigskin.

The truly savvy folks among us, though, know that footballs are brown bass who like to dig deep and then rocket skyward with an air attack. From east to west, north to south, if the conditions allow you to chase them, this is the time to catch your personal best smallmouth. Here are 10 places to get it done:

The Pacific Northwest may be known for trout and salmon, and the bass-crazed locals would just as soon want you to continue to think that. They know that they have world-class—perhaps world record—smallmouth in their midst, and big Coeur d’Alene may be the best of lake the bunch. When the summertime crowds clear off and the temperatures drop, the bass frenzy heats up, and it almost always takes a 4- to 5-pound average to win a local tournament.

Most of the local anglers are crazed over small kokanee salmon, and the not-so-hidden secret is that so are the bass. Get your big glide baits and swimbaits and get to work, replicating the big, protein-packed “baitfish” that smallmouth love most.

Experiment with your glide baits in a swimming pool or clear water pond until you can manipulate them expertly, forcing 180 degree turns. Often big smallmouths will follow but not commit, and a change of direction will trigger strikes.

Escaping the people is easy in northern Michigan, but escaping the wind is a different situation altogether. If you can get out of it, both Little Bay de Noc and Big Bay de Noc hold monster populations of shallow-roaming smallmouths. Winter comes early here, but the fish continue to bite until the water is hard.

Traditional smallmouth killers like jerkbaits and tubes will continue to produce, but when fish get tougher, an overlooked clear-water killer is a small black or brown marabou jig. Find one in a 1/8 ounce size with a quality hook and prepare to get bitten by all sizes of smallmouths.

Invest in a reel with a quality drag system or learn to back reel. You will get many more bites using a thin-diameter line. Smallmouths don’t give up easy, so play them carefully.

Less than two hours from the hubbub of the Twin Cities, massive lake Mille Lacs has long been known as a walleye and muskie factory, but it was only recently that out-of-staters clued into the fact that it also has more than its share of 5- to 7-pound smallmouths. They get on boulders the size of Volkswagens and pull like there’s no tomorrow.

Try a football jig on offshore structure. That’s what Texas pro, Keith Combs used to win the Bassmaster Angler of the Year Championship here. He found the fish ganged up and feeding on crawfish.

On large bodies of water, use your paper maps or electronics to figure out how winds will affect your day. Sometimes a breeze will make the bite better, but it can also make things unsafe, so find safe havens and areas that will remain fishable.

Year after year, Buffalo Harbor in New York State continues to pump out a number of big smallmouths all season long. They relate to well-defined offshore structure, and in the fall come shallow again to put on the feed bag. Nothing beats a tube for dragging or a dropshot for vertical fishing. Focus on rock and irregularities and you’ll find groups of big brown bass.

For anglers who are good with their electronics “video gaming” fish—getting on top of them and dropping straight down with a dropshot – can allow for pinpoint presentations.

Learn to use both two-dimensional and down-imaging sonar and check how one differs from the other to decipher what you are seeing on the screen.

The Windsurfing Capital of the World is an unrelenting foe on some days, but when conditions are right there are few places that produce the same number of mean-spirited 5- and 6-pound smallmouths. As with Coeur d’Alene, many of the locals prefer other species, and you may catch salmonids while chasing bass. Figure out how they relate to the current, and you can run a pattern up and down the river.

Tubes and Carolina Rigs will always produce, but the Columbia is one of the best topwater smallmouth venues in the world. Start with a walking bait like a Sammy or Vixen, and have a comeback lure like a tube or Senko ready for the ones that miss.

Smallmouths love chartreuse, so tip your soft plastics with a bit of dipping dye, and choose hard baits and spinnerbaits that have at least a dash of gaudy coloring.

St. Clair, sometimes referred to as the “Sixth Great Lake,” abuts Metropolitan Detroit and extends into Ontario. It’s shallower on the whole than similar waters like Lake Erie, has lots of grass in the 12- to 18-foot range, and a huge population of smallmouths. Popular humps and subtle drops produce year after year and draw anglers to one of the best urban fisheries in the world.

The clear and relatively shallow water lends itself to a jerkbait presentation. While some anglers think it’s only effective in the pre-spawn, the universal baitfish shape produces any time smallies are snapping.

Use light line with your jerkbaits—10- to 12-pound-test fluorocarbon, or even 8 when fish are being difficult. It’ll allow your bait to get deeper and also maximize the action, without pulling your lure upward as it suspends in front of an investigating bass.

Read Next: How to Catch Monster Winter Smallmouths

The winding St. Lawrence River leads to the massive expanses of Lake Ontario, but on the way, it literally passes the “Thousand Islands,” an endless smorgasbord of bass-holding structure made better by the river’s heavy currents. There are backwater largemouths, too, but they play a secondary role to the bronzebacks that can be caught from dirt-shallow down into the depths.

A dropshot reigns supreme, no matter the depth, but you’ll need to upgrade your weight to hold bottom in the strong current.

When fishing a dropshot, especially in current, less can be more. Don’t manipulate the lure with your rod tip any more than absolutely necessary. Let the bait do the work for you.

Pickwick’s resurgent grass has produced teen-class largemouths in recent years, but that doesn’t erase its history and current status as a smallmouth mecca. They grow big here—up to and including world-record class fish—and a key area is the rocky habitat below the upriver Wilson Dam.

If you’re willing and able to use it, an Alabama Rig in the current can produce not just one trophy smallmouth, but several of them. The strikes will be teeth-rattling and you may also tempt a largemouth on the same cast.

When fishing any tailwater or other heavy-current scenario, make sure to wear a lifejacket at all times, and if you fish alone, let someone know of your plans. Pay attention to generating signals from the dam operator and don’t take unnecessary risks.

Read Next: Three Ways to Tweak Your Baits for Smallmouth Bass

Lake Cherokee is a classic highland reservoir with all three major species of bass, including large specimens of each. It used to be that most of the big ones were largemouths, but in recent years smallmouths have made a push to be top dog. They may scatter and suspend in the fall, but anglers who find offshore humps and “bowls” will eventually run into a wad of them.

Bassmaster Classic champ Ott DeFoe recommends using a crankbait like a Rapala DT10 in 8 to 12 feet of water and focuses on points and drops that are getting pounded by the wind.

Just because a lake is at winter pool and falling doesn’t mean that the fish will abandon the shallows. If your offshore bite is not living up to its promise, there may be smallmouths living “in the dirt.”

If you like to wade, fish from a canoe or kayak, or—better yet—have access to a jet boat, the Susquehanna is calling your name. The central Pennsylvania portion, upriver from where it dumps onto the Chesapeake Bay, provides an endless series of rock ledges, boulders and gravel bars, the ideal smallmouth habitat. It’s prop-eating country, for sure, but that’s what makes it great. Key on current breaks and catch them just about any way you want.

Fish a jerkbait aggressively through current seams and in eddies to elicit hard strikes in surprisingly cool water. Either baitcasting or spinning tackle will work, and don’t hesitate to go to a large profile body to force a “fight or flight” reaction from the biggest fish in the pool.

While smallmouths may eat jerkbaits aggressively on occasion, they’ll often slash at them and end up with hooks in the side of the head or in their chins. Then when they jump they get off. Make sure that your trebles are sticky sharp and don’t hesitate to change them regularly, even several times a day after bouncing off a rock.