We’ve come a long way from the cane pole and bobber. So, too, have the manufacturers of fishing gear, whether it’s a bomb­proof reel, a cooler built like a brick outhouse, or a portable sonar for a kayak. You may be part of the dawn patrol for stripers or prefer to cast to small, rock-strewn pools for leader-shy brown trout. No matter. Here are 24 products designed to help you make the most of your days on the water. Maybe most important, each one bears the stamp of approval from the Field & Stream editor who tested it where it counts.

The Tranx 500 has been a staple among muskie fishermen and inshore anglers for years. Since its introduction, these crowds have clamored for smaller sizes and left-handed models. Now they have them. Though smaller in stature, the Tranx 300 and 400 are no less capable of taming freshwater inshore beasts. —Mark Modoski

Shimano’s Hagane magnesium body and cold-forged main gear combine to create tight tolerances and rigidity that results in one tough reel. And yet, there’s a smoothness that won’t dissolve over time as it does with lesser spinners. Don’t be afraid to tackle inshore salty species with the Exsence, either. —Joe Cermele 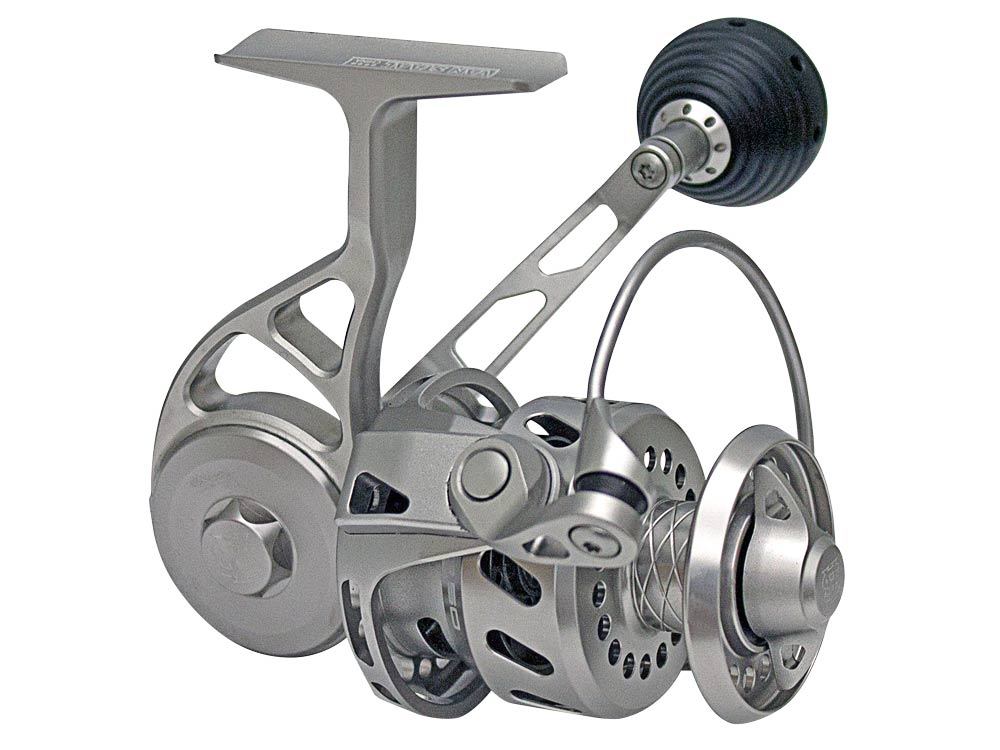 The fully machined, sealed, and waterproof VR50 boasts 37 inches of retrieve per crank and still weighs just 8.9 ounces. Spool capacity is 360 yards of 20-pound-test braid. Yes, it’s bloody expensive, but this reel will last longer than you will. —Nate Matthews

Penn’s Slammer III is engineered to withstand harsh saltwater conditions and the punishing runs of offshore species. It’s sealed to keep water out of the gearbox and drag system. Sizes range from 3500 to 10500, offering 30 to 60 pounds of stopping power. And compared with other high-performance saltwater reels on the market, it’s ­modestly priced. —M.M.

A smooth, dependable disc drag borrowed from the pricier Hydros reels adjusts through two and a half revolutions to fine-tune fighting pressure, a blessing when you’re fishing light tippets. The midsize arbor boosts retrieve rate, and the machined chassis and spool have the classy good looks that are a ­Battenkill hallmark. —Ted Leeson

QRS stands for Quick Release Spool, and fans of old-school cassette-style fly reels will recognize the design. Each QRS comes with four polycarbonate spools—two mid arbor and two large—that quickly snap in and out of place, making switching from sinking line to floating line a breeze on the water. Unlike similar reels of the past, the QRS has a beefed-up drag and a machined alloy frame that can take a licking. —J.C.

Scott has reengineered from the ground up the original G, a milestone in graphite fly-rod history. The 4-weight embodies the changes with a new taper, updated materials, and ferrules that are lighter, stronger, and more flexible—all of which promotes better performance in the wind and truer tracking. But you’ll find the same smooth, easy, and fluid medium action and relaxed casting tempo for which Scott rods are known. —T.L.

The Legend Glass is one of the most intriguing rods I’ve ever used, and just may be the best crankbait stick you’ll find. Glass has long proved its worth for fishing cranks, but its bulk and heavy weight can turn off anglers. Other manufacturers have had some success using composites and moderate-­action graphite, but St. Croix takes an entirely different approach. Employing a combination of linear S-Glass and state-of-the-art technology, the end result is the ultimate fiberglass rod. —M.M.

If you’re trekking to a big-trout honey hole deep in the backcountry, this is the net you need. At 32 inches long, with a 12-inch-deep bag, it’s large enough to handle whatever wall-hanger you happen to hook, but at less than 1 pound, it won’t wear you down or prove burdensome on the hike in. The carbon fiber and Kevlar construction will also withstand a serious beating, should you use the net to bushwhack through brush. —JR Sullivan

Whether you’re hitting drop-back steelhead or stripers, this jacket makes early spring and fall nastiness a nonissue. It may be puffy, but the Force 12 is fully breathable and nonbinding. Abrasion-resistant overlays stand up to walks through the brush, and a storm hood and drawcord hem keep everything from a drizzle to a downpour at bay. —*J.C. *

I fished this lightweight vest on sweltering farm ponds and big tailwaters waiting for it to cry uncle. No dice. It’s 10 times tougher than it looks, toted twice as much as I thought it would (thanks to a whopper of a rear cargo pocket), and rode high enough that I could hitch it up with my free hand to cross deep creeks. —T. Edwards Nickens

Clothes for fishing have advanced light years over the last decade, and for good reason. Staying comfortable helps you enjoy time on the water and catch more fish. These Aftco shorts wick moisture and dry quickly. They have a stain-release finish, and four-way stretch that makes for a perfect fit. The boardshorts come in two grouper-inspired patterns; the ­Cyberfish in solid menthol green or black. —M.M.

I’m no surfer dude, so I was a little leery when I first tried on these Hawaiian-themed breathable mesh shoes. But a float trip showed me they’ve got what it takes. The soles won’t leave any marks in the drift boat, and if you get out to do some wading, they have just enough grip to keep you planted upright. The mesh dries quickly, too, so you can walk right from the river to the bar. —Slaton L. White

These polarized polycarbonate lenses (in your choice of six frames) excel in the low light at dawn or dusk or when clouds and drizzle block an overhead sun. A yellow tint with a slight mirror sheen allows for 30 percent light transmission—three times as much as a copper lens—so you can spot bedded bass, distant bonefish, and that brown trout sulking in the logs no matter the light. They’re not quite dark enough for full sun, but they flat-out shine when the going gets shady. —T.E.N.

From drivers and wrenches to a bottle opener and an emergency cutter, Leatherman has packed 15 tools into the band of this Swiss-made, MacGyver-­approved watch. It’s TSA friendly, water resistant up to 200 meters, and built to take a serious beating in the outdoors. Stylistically it might not be for ­everyone, but I can see this watch saving my bacon streamside when a screw gets loose on my reel foot or I need to tighten a boot stud. —J.C.

A good duffel is like a good pair of boots—sturdy, functional, and long lasting—and this bag scores high marks across the board. The 40-­liter main compartment holds a couple of days’ worth of gear, easily accessed through the large U-shaped top flap, and three accessory pockets corral smaller items. Stowaway padded shoulder straps convert the duffel to backpack mode for hands-free transport. It’s made of tough, lightweight, 600-​­denier nylon. —T.L.

To create this portable sonar, Humminbird started with a 5-inch Helix, added a carrying case and a removable transducer, and ended up with the best unit you’ll find for tossing on kayaks, canoes, or rental boats. The Helix 5 Sonar G2 PT has loads of features like GPS, chartplotting, and Chirp sonar. —M.M.

This new fishfinder makes sidescan sonar available at an entry-level price point for the first time in the Lowrance lineup. The Hook2’s auto-tuning sonar settings adjust to your conditions on the fly, meaning you won’t need an advanced degree in fishfinder operation to get optimal performance. Units range from $99 to $1,499, depending on the size of the display, which comes in widths of 4, 5, 7, 9, and 12 inches. —N.M.

Four fly panels of injection-molded thermoplastic elastomer won’t fatigue or tear like die-cut foam. They grip even weighted flies tightly—and hold lots of them with a magnetized swing leaf that self-locates for proper opening and closing. The gasketed, rugged housing snaps closed with a large, easily operated latch, providing waterproof protection, and it slips smoothly in and out of pockets or packs. —T.L.

This magnetically charged rotating plate mounts below your vise and features four stations held in place by magnets. Drop anything from snips to hooks on the center plate and they’ll never get lost. Meanwhile, the tool holder, tray holders, and thread holders keep your essentials close at hand. —J.C.

This spring, Gerber will launch a new line of fishing tools, featuring some sharp and innovative fillet knives, nippers, multitools, and more. But the one that really caught my eye was the Magnipliers. The ergonomic grip is offset to improve line of sight in tight places (e.g., a fish’s mouth), and the carbide cutters will snip through braid or the heaviest mono. The pliers come with a nylon sheath and lanyard. —Colin Kearns

Don’t think much about hook design? Maybe you should. The tweaks to these treble hooks are making a big impact in the fishing world. A unique square bend below the point helps the hooks grab faster. This same notch in the shank also reduces twisting, which equals fewer poppers and cranks flying through the air during a jump. —J.C.

Otterbox may be a new player in high-end coolers, but it’s already making waves. The Venture‘s built-in tracks let you snap on myriad accessories like bottle openers and cup holders without drilling. The smartest add-ons, however, are the all-terrain wheels. Anyone who owns a premium cooler knows they aren’t light. Snap on the wheels and the Venture rolls down the dock with ease. —J.C.